A history of the bikes used by Team 7-Eleven

Pay no attention to the post date - just a book keeping trick.
This page last updated 7/31/2010

A history of the bikes used by Team 7-Eleven

This is another project in progress. I'd appreciate any help any of you can provide.
I believe they rode five different bikes in their 10 year span: This is a Serotta/Murray with Columbus tubing, so it would be 1984 or 1985 according to Ben Serotta.


1981 (Team 7-Eleven/Schwinn) I guess they rode SCHWINNs, but I don't think I've ever seen a photo of one. There were seven men on the inaugural 7-Eleven-Schwinn team in 1981:
Eric Heiden - Olympic speed skater, USPro champion (the first?) and sports doctor.
Jeff Bradley,
Greg Demgen,
Tom Schuler,
Danny Van Haute who would later become Team Director for Jelly Belly
Roger Young
and Ron Hayman. 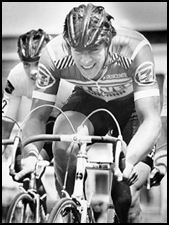 here's a photo of Tom Schuler on a 7-Eleven Schwinn!

Here's Eric Heiden at the Detroit Criterium on a bike with no decals. 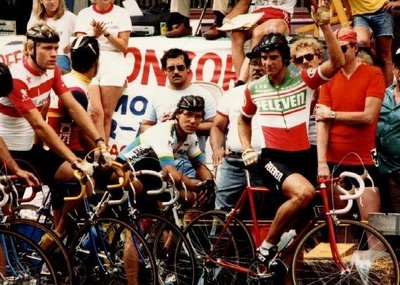 Photo by Tim Potter, he has some more good shots HERE.

I think Heiden's unlabeled bike is a Ritchey. The seat stay treatment by the seat pin clamp is identical to an early Ritchey I owned. Quite similar to Eisentraut's. Notice also the stem, which looks to be threadless. I know a guy from Palo Alto who rode junior Nats on the track (pursuit and kilo) on a Ritchey with the same stem type. He added that the fork crown top was open, i.e. the fork blades were uncovered, you could peer down into the blades. Saving weight in the70's. I've seen pics of Heiden in 7-11 kit riding a Gazelle.Regards, Tom

1982 - 1983: According to Davis Phinney (in the 2008 March-April edition of Road Bike Action), the team rode Rossin frames. Not sure if they were rebadged with another brand or not. 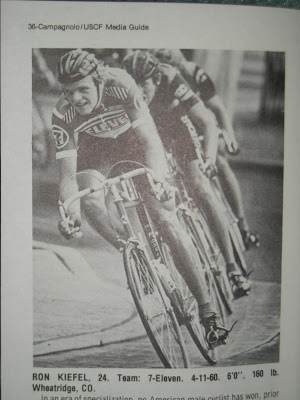 
1984 -1985: Murray-labeled all red bikes. Murray became the official sponsor because they'd also been named the official bike of the LA Olympics and wanted some extra exposure. They were built by Serotta with Columbus tubing. I don't know how much mileage the "real" Murray got out of having their brand on the 7-Eleven and Olympic team bikes, but I doubt if anybody who read Winning went out to K-mart to buy one. This ad is from 1985. 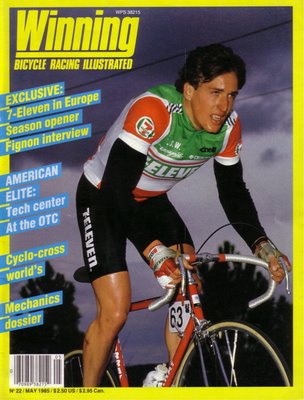 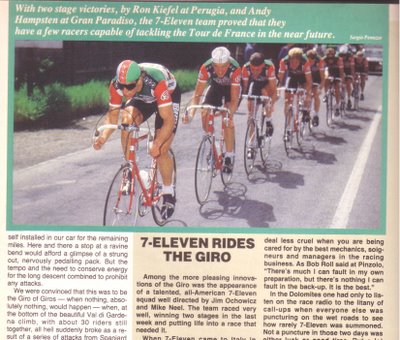 1986 - Murray-labeled red bikes with the fade-out white panels and white forks. Still being built by Serotta but now with True Temper tubing - these bikes had a lot of failures because True Temper insisted on pushing the limits of thin walled tubing... Ben Serotta has said he regrets letting them push him into this choice and he wished he would have been allowed to make something like the Merckx bikes that the team got in 1989. Still riding slotted cleats and toe clips with straps. This was 7-Eleven's first year in the Tour de France. 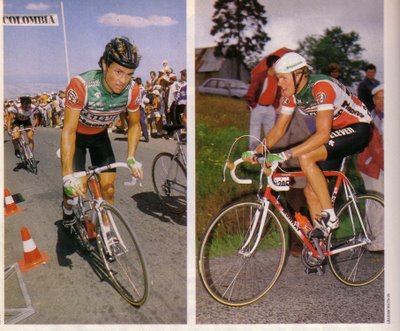 Jeff Pierce on the left and Ron Kiefel on the right in the 1986 Tour de France. Note Jeff’s bike has aero brake levers and is missing the head tube decal. 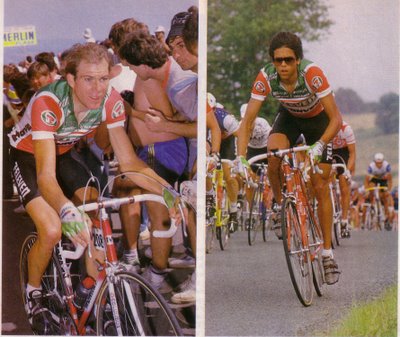 Bob Roll in his finest, and Alexi Grewal in the 1986 Tour de France. Alexi's bike also seems to have some customizing.

1987 - Huffy labeled red and white bikes. Still Serotta, still True Temper, except by now some of the team had started to buy their own frames because of the failures. Bob Roll had a DeRosa for example - he says he just showed up at Ugo DeRosa's door one day and Ugo measured him and made him a frame for free!

1988- Huffy labeled red and white bikes. Most were made by Serotta but some riders bought thier own from other builders. They had USA flags with HUFFY on the head tubes, Huffy on the front of one fork, and TRUE TEMPER on the front of the other fork blade. Andy Hampsten won the 1988 Giro on this bike (but it was a Slawta/Landshark) and the first version of STI (8-speed) was tested on this bike.

Here's a little shrine to 7-Eleven with a 1988 Huffy Team Replica. Note True Temper decal on the toptube and Serotta on the chainstay. 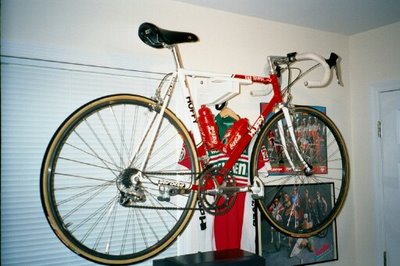 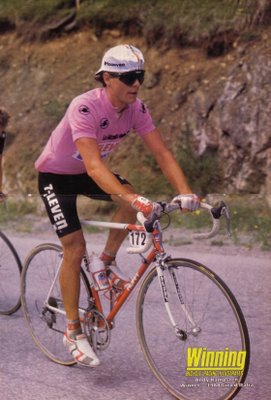 Andy Hampsten’s 1988 Giro win was super impressive. People still talk about it in awe. Note lack of Serotta decal (built by Slawta). Looks like the bike above doesn't have the True Temper decal but the bike below has both True Temper AND Columbus stickers. 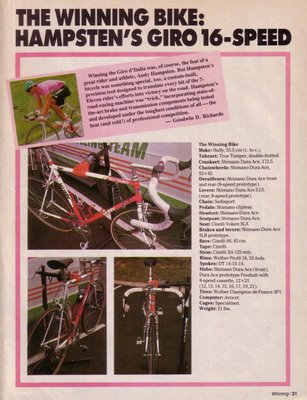 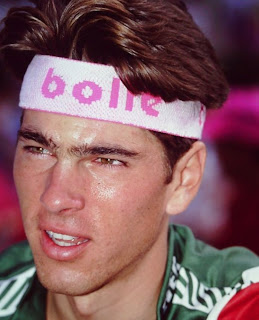 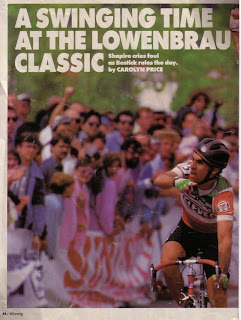 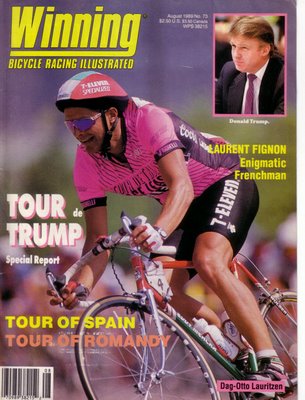 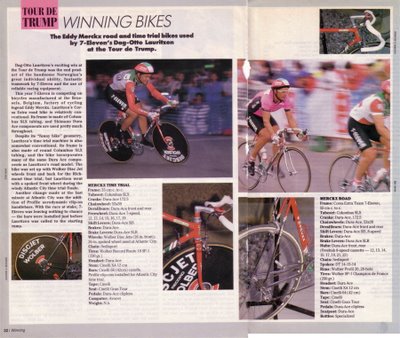 Dag Otto Lauritzen was a fun rider to watch. This spread on his bike is from Winning Magazine 1989 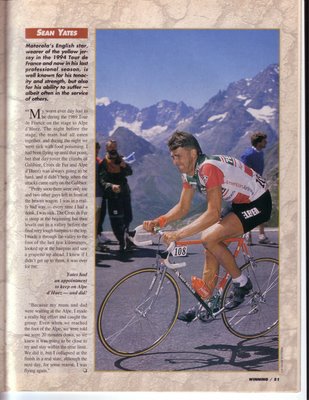 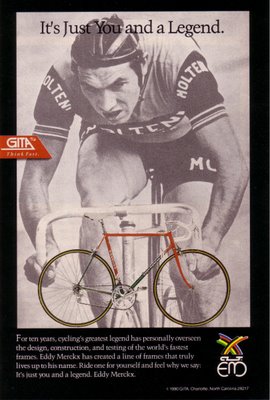 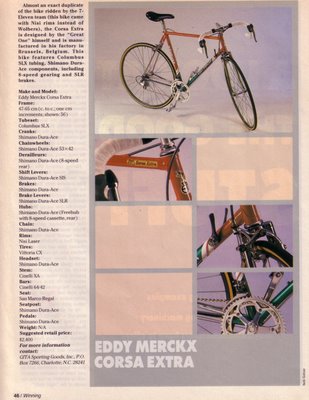 In 1991 the team became Motorola and their Eddy Merckx bikes changed colors. I love this catalogue sheet for 1990 Corsas - that's my frame! From the same catalogue as above, the 1990 line also included a "Team" model that had the "7-Eleven Team sticker - I had previously thought that the sticker was only for actual team issue bikes.

Below, we have Bicycle Guide's review of the Team 7-Eleven (colors only?) Corsa Extra 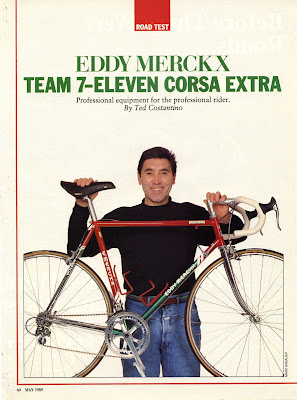 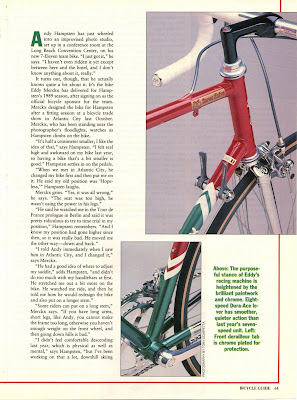