I was sick yesterday so couldn't go watch the Diablo Time Trial. Today for Father's Day the wife and daughter took me to Nevada City to watch the race. This race has been around a long time but I've never seen it. Adam wasn't going to race it until he found out that Lance Armstrong, Levi Leipheimer, and Chris Horner were all coming - it was too late for him to pre-reg so he got there at 9am for day-of and just made it.

We got there about 4pm and saw most of the masters category race before the P12's got started. It wasn't exactly crowded but it was very cramped because the sidewalks are so narrow - you couldn't really walk the course like other criteriums or circuit races so we just picked out a good spot and stayed there.

It was 2-1/2 hours up but 4 hours to get home because of highway construction (brilliant CalTrans!) and we didn't pull into the driveway until almost 12:30... photos and a video soon... check back later. 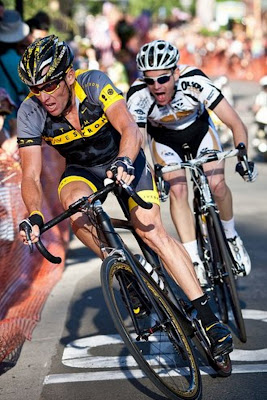 Having been lapped 4 or 5 times already, Adam "buried himself" to stay on Lance's wheel for half a lap in the finale hoping someone would get a photo just like this one... wow.
JamFoto's Flickr account
EDIT:
Be sure to see the video I made, posted a little later:
http://diabloscott.blogspot.com/2009/06/more-nevada-city.html
Posted by Diablo Scott