Bike to Work Day is tomorrow so a few extra folks from work came for the Wednesday Night Ride up Diablo.  Including special guest rider Brad, who has done some impressive cycling, but is currently not in top condition... and neither is his bike.

Also Donna, who is getting excited about riding and just bought a really nice mid-level road bike with disk brakes and a beautiful but subtle paint job to replace her heavy hybrid.

And Justin with his new really nice road bike with the disk brakes and attention-grabbing paint job.

And Tanner with her AIDS LifeCycle buddies.

Brad pushed the pace right from The Gate and dropped everybody but me; I started to think he was lying about being out of form.  Then suddenly after about 10 minutes he just sat up and said "I'm turning around now."  That kind of shocked me, and here I was with a great time for the first split but now a little too spent - so I slowed down a bit.  After a few minutes though I was recovered so I picked it up again and had my best time of the year to Junction.

Wildlife Encounter:  baby rattlesnake in the shade near Son of Chainbuster... might've been dead.  I didn't see it until I almost ran over it.  There have been a few rattlesnake bites to visitors in The Park this year so lots of people are a little nervous.  Also, a bunch of turkeys... again. 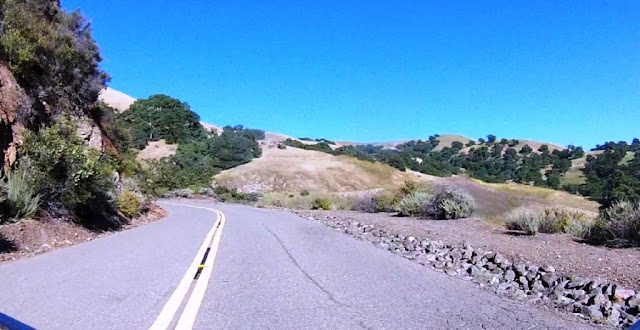 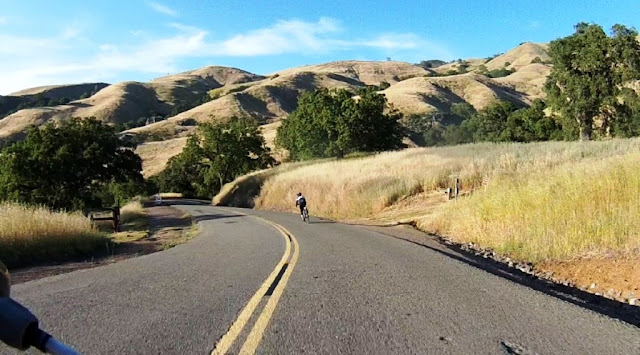