Note:  This bike was stolen from my home in March 2014 - if you see it, please contact me. 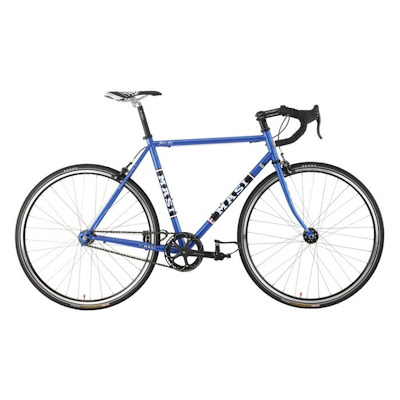 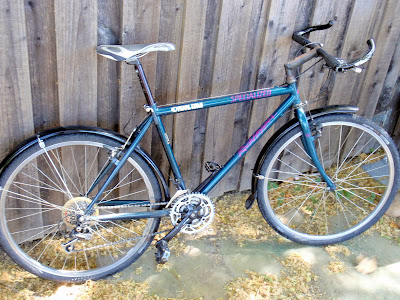 I finally sold my old Specialized Rockhopper Comp – that thing saw 17 years of hard use from MTB trails, Critical Mass, baby trailer pulling, kiddie tandem add-on pulling, and most recently… foul weather commuting. The frame was still going strong but the shifting and brakes got finicky in the rain.

Plus I always liked commuting on a fixed gear bike but my other ones were free experiments that didn’t fit well.

What I wanted was a bike with room for big tires and fenders, long wheel base for stable handling, sensible brakes front and back, wide roadie handlebars with room for lights, and normal brake levers. I considered a Surly Long Haul Trucker, a Casseroll Single, Kona Paddy Wagon, and a few others but they all had one or two elements that kept them from being exactly what I wanted.

Masi is now owned by Haro which started as a BMX company and they contract their bikes through Asian factories like so many other bike companies do. But in a world of name brand bicycles that have no relationship to their own history… the Masi name is one of the best!

This is the same frame Masi uses for their randonneur bike so it has down tube shifter braze-ons and a derailleur hanger but I won’t be exploiting those features.

$505 complete cost delivered to my door… sweet price point! Most of the others I looked at were $700 +. Ordered on Sunday, arrived on Thursday, rode it to work Friday morning. 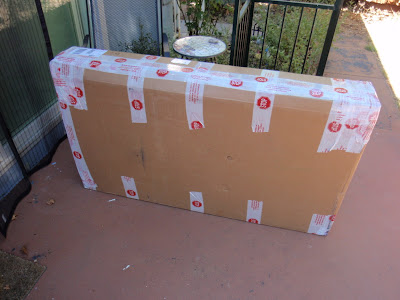 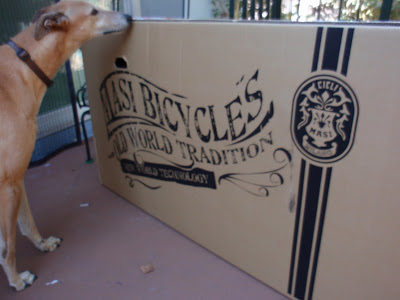 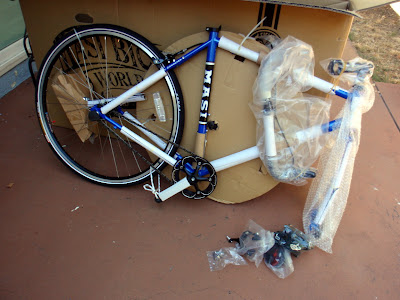 I ordered this from Sun and Ski Sports in Houston. Apparently they just pass these through – it didn’t look like they had assembled it and then unassembled it for packing… they probably provided the outer box though. Anyway, no damage on delivery. 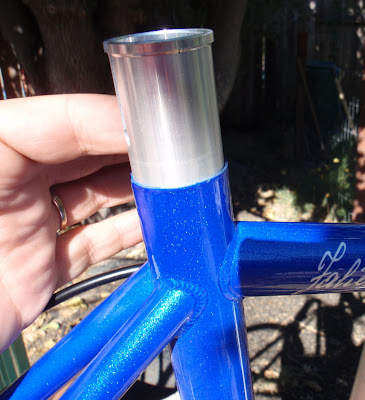 The seatpost comes with a shim – I guess they did this so they can use the same seatpost for lots of bike models including aluminum, steel, and CFRP. Can’t see it below the collar and it’s not an obvious size reduction anyway… no worries. 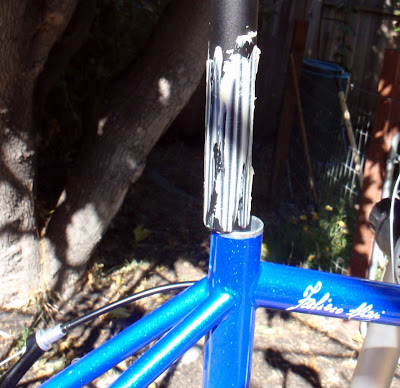 Aluminum seatposts in steel bikes should be greased. 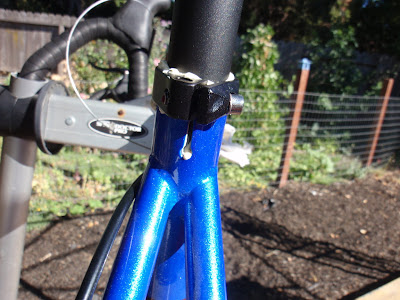 Too much is better than not enough. 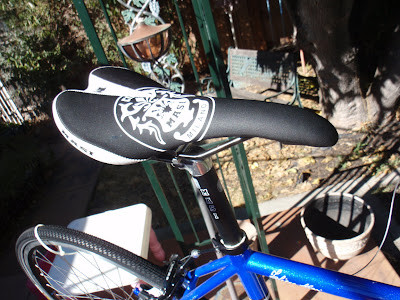 Too much setback for me… but I’m funny that way. 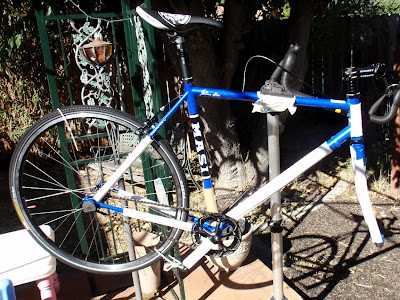 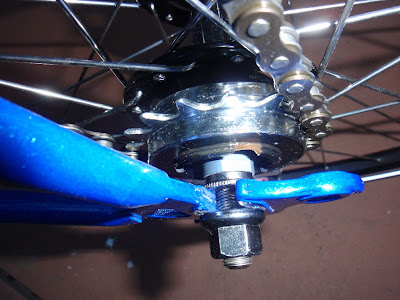 Then, I took the rear wheel out, put on my fixed cog and lock ring, and reinstalled it. Had some trouble getting chain tension right until I realized the drop out screw adjusters were all the way in. Both front and rear axles have nice track nuts on them.

Flip flop hub comes with a 16t freewheel gear; I put a 16t fixed cog and lockring from my old Centurion on the other side and will mostly be riding it fixed. 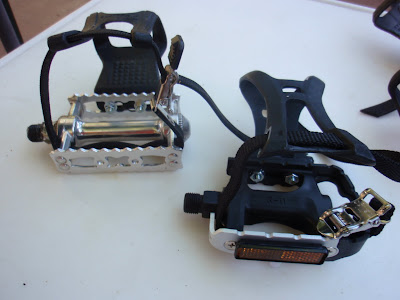 Came with some usable pedals (bottom) but I had these MKS Touring ones that I really like (they fit my caveman-width feet well) so I put them on instead. 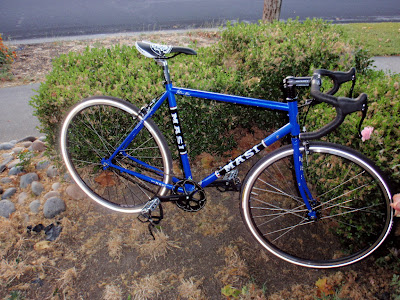 The wheels seemed to be pretty well true and tensioned right out of the box, but I heard some popping and pinging so I’ll give them the Jobst treatment after a week or so.

Handlebars are really wide and flat – good for lights and accessories, but it feels kind of funny at first… also not good for sprinting from the drops because you’ll bang your wrists.

There’s one point in my commute where I go from the trail, to a sidewalk, to a busy street – this bike handled the curb hop with aplomb. The long wheelbase and 32mm tires really soaked up the bumps and pothole hits too.

I’ve never had a road bike with tires this wide – also, they have a reflective stripe in the sidewall; smart! 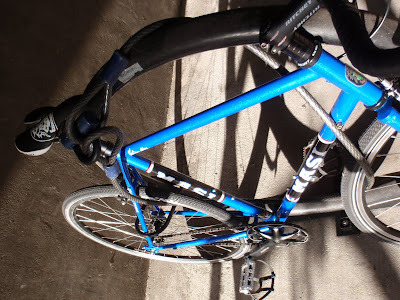 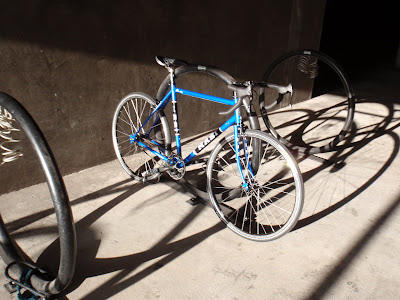 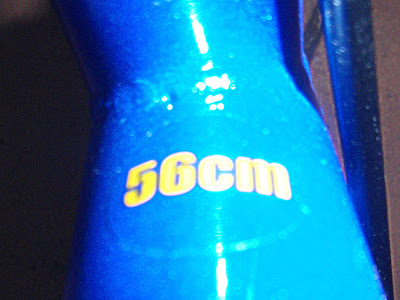 When I ordered this bike, I had to choose between a 53cm and a 56 cm. Now normally I ride a 54 or 55 so I had to decide if I wanted a little bit bigger or smaller than a perfect fit. I checked the geometry charts and compared them to my other bikes and decided on the 56cm frame. The standover and top tube lengths are actually a little smaller than my 55cm Eddy Merckx so it should have been perfect for a commute bike. And it really is pretty close but for some reason the reach seems a tad long… might be the seatpost setback. Maybe I’ll get used to it or maybe I’ll swap out the stem or something; not worth changing anything until I have some more riding time on him.

The details are really nice – the fork is flat crown and lugged, and the rest of the tubes are TIG welded. The paint is deep and rich and even, the graphics are old school interesting and the decals are all on straight. Component selection is probably similar to what I would have spec’ed myself if I worked at Masi – the brakes were a little clunky to fine tune but completely acceptable. Not sure about the saddle yet… be nicer with a Rolls but you can’t expect a $100 saddle on a $500 bike; not something I’m in a hurry to replace anyway.

The Final Word:
The Masi Speciale Commuter gets a 9 out of 10 on the Diablo Scott commuter bike rating scale. I’d go higher if it came in a 55cm, a zero setback seatpost, and some jewelry to go over the shifter braze ons.

Got some pretty fenders too that I'll put on when the rain comes again. 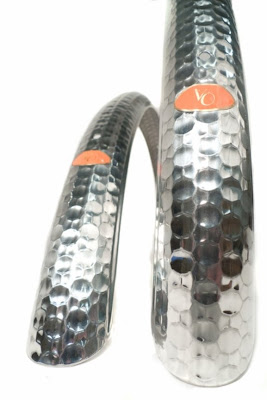 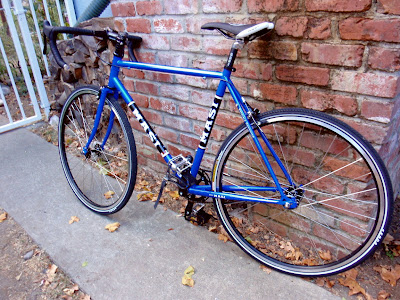 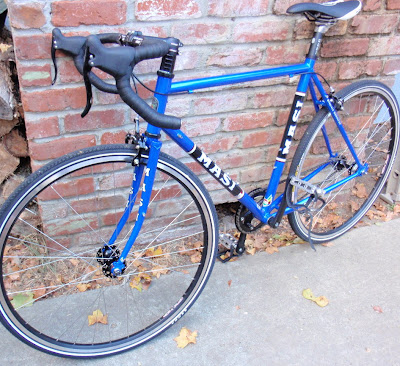 Nice new ride Scott! Always fun to get a new bike - I wish you many happy commute miles!