NO RIDE
I haven't ridden in almost a month! I do have some stuff to write about though. 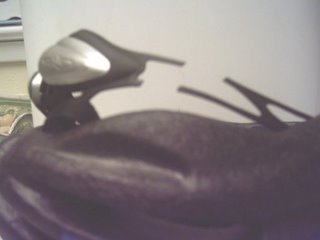 The straps that wrap around to the back of your head, to the adjusting device in back, just broke - on both sides, for no apparent reason. I noticed it when I took my helmet off after my morning commute to work today.

Went out tonight and bought another one of the same model - I tried on a bunch, but you gotta buy what fits and as the guy said, I have a Giro head. The new one's purple!

Also, I got new clincher wheels built for the Belgian Beast, new lights and a comfy saddle for Dave the Fixie, and Planet Bike fenders for the urban assault bike. Looks like I won't be able to ride next weekend either, but I should have time to take photos of my stable and blog about fenders and flashers... < sob>.
Posted by Diablo Scott No comments: