No one at the Gate.  Plan for today was a PB on the Washout split, so I started easy, also thinking JB might catch me.

Washout split went OK but I didn't have as much energy as I hoped for.

At the Junction you always see the people who passed you on the way up, and then you see the people you passed coming in too... everybody's always friendly though.  JB came in a few minutes later.

On up Summit Road and an Alameda Whipsnake crosses my path - 21 years of riding The Mountain and that's the first one I've ever seen.  Booger was fast too.  See video:

The Alameda Whipsnake (Masticophis lateralis), aka Striped Racer, is a colubrid snake of the California coast and foothills. It is 90–120 cm long, slender, with two yellowish stripes along its back, set against a dark brown or black back. It is fast-moving, diurnal, and an active forager. It is nonvenomous, but likely to strike if captured.

At Juniper, there were signs for a Catholic Mass and nature hike going on and the parking lot was full.  I heard a bunch of liturgical mumblings coming from somewhere in the camping area.

Something happened at the bottom though.  You know those Botts Dots right at the exit?  Well I usually slow way down, approach from the left and try to cut between the dots at an angle to the right; and today just as I was doing that, two guys in racing kit yelled at me - they were going to pass me (on my right) at the bottle neck there by the kiosk.

So I did change my line but for a good reason at a spot that's posted 5 MPH and I think those two guys were wrong.  They are obviously good riders but that was just dumb.  What say you blog readers?
Posted by Diablo Scott 2 comments:

Not too hot, a little windy.  My plan was to go for a PB on Split 2 - made it, but I never recovered and overall time was pitiable.

First guy passed me after about 3 minutes.
﻿﻿﻿﻿ 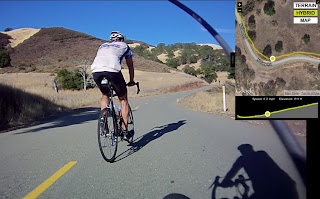 Another guy passed me on the Bump.

Then a guy pulling a jeep passed me, also on The Bump... I got WAY out of his way. 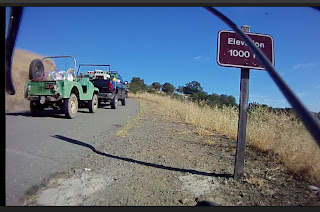 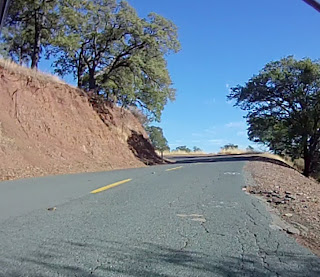 Then this guy unclips right in front of me like he was getting ready to crash... maybe he just had a cramp.

Passed this guy REAL wide.  In this section you can't hear anyone behind you for the wind noise so I just tried to not spook him when I came around.

Today was the C4 Mount Diablo Time Trial.  P-1-2 was the first wave and the first guy was scheduled to start at 8am, so I started at 7:30 hoping to beat him.  Success! I was tempted to ride up the starting ramp, but the official was lying down on the platform to block me.

Wildlife Encounter:  A lizard playing chicken with me - darted across the road below the Bump

There were a lot of centerline cops set up for the race - cones around several bends, etc.  I think the road was closed to traffic but they let bike riders up even if they weren't part of the race.  One of the judges was cheering me on... right.

My initial plan was to go up but at the Junction I decided to do a Bump de Bump.

Here I am showing some South Gate dudes a clean pair of heels.  Also, watch for doodoo head in Subaru wagon.

Rode solo.  Got passed by a bunch of people.  Did a couple of one-mile intervals.

This is cool - if you go to the Contour website you can watch the video with a little map that shows where the video is and how fast it's moving... but you know where this is anyway.

Positively chilly this morning.  JB showed up with his Goretex jacket.  We figured it was about 50°F colder than Wednesday night, and that must be a record delta-T for consecutive rides.
Wildlife Encounter:  turkeys below the Gate... lots of really young ones.
Not a lot of riders today; probably lots of regulars at the Death Ride.
After Junction I continued up to Juniper solo - nice photos below. 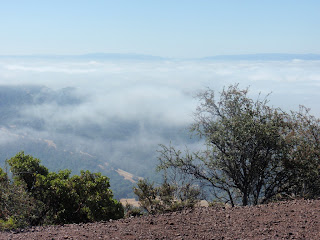 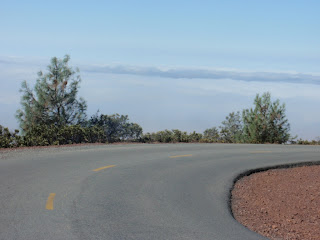 Next week is the Diablo Hill Climb Time Trial... not sure what I'll be doing for that, but it won't involve taking out a racing license.
Posted by Diablo Scott No comments:

Heat advisory - and they mean it.
JB and I took it pretty slow.
My heart rate was near 90% of max most of the time, even though I was controlling my breathing pretty well - I guess hot blood needs to get pumped faster.

Wildlife Encounter:  two bunnies and a coyote at the Junction.  Bunnies escaped when the coyote shied away from all the humans there.  I thought... what an interesting survival mechanism; when something wants to eat you, run TOWARD the humans.

Had the helmet cam set for one photo every three seconds - here's a sequence: 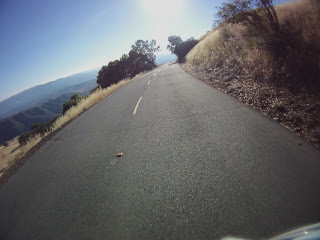 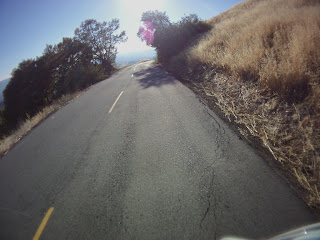 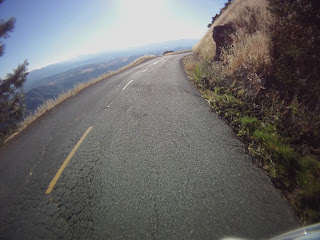 Also does video... this is a great toy... watch for product review soon.
This isn't really interesting, just me playing with the settings and different camera angles until I figure it all out.  Helmet Cam facing backwards.

Woke up late, with a headache.  Not a good sign.

Dog got a short walk... she's not happy either... I hate that big-sad-eyes look of disappointment.

Found the rock on the post... JB left without me... probably a good idea since I wouldn't have been good conversation.

Wildlife Encounter:  Turkeys in the shade near Arroyo Ranch... gotta zoom in to see 'em. 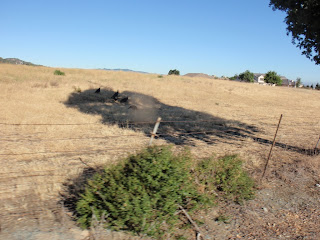 Wildlife Encounter:  Jack rabbit up hill from The Dips.

Wildlife Encounter:  A deer ran across the road below The Bump, about 10 meters in front of me, but hid in the grass before I could take his photo.

Roadkill Report:  Some kind of lizard... kind of dried up or I would've gotten a close-up.

Lots of non-regulars on The Mountain today... probably TdF related.  Lots of people parked for rest stops at every wide spot in the road.

Diablo Hill Climb TT is in two weeks - I'll probably do another photo log... watch for it!
Posted by Diablo Scott 2 comments: