Seemed to be pulling out of my pedals a lot recently... apparently worn cleats were the cause: 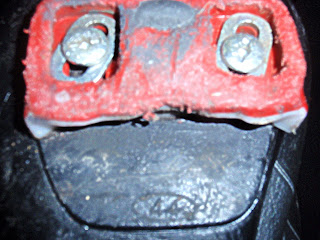 Look Delta... ole skewl.
Went to Sports Basement to get some new ones - they were $15 but the Basement had a sale on new pedals that came with cleats, so I decided it was time for a change.  The old pedals were close to 10 years old and I start to mistrust weight bearing components at that age - plus they always squeaked... Adam says his Shimano pedals never squeak so I chose them pretty much on that criteria... and the sale price. 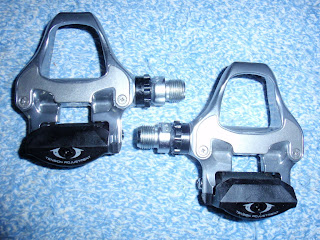 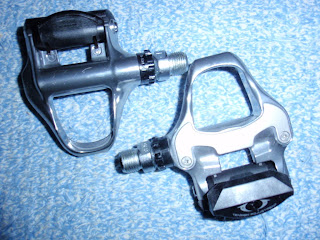 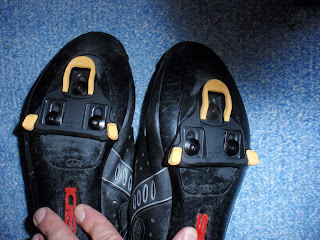 Put on the cleats and mounted the pedals and looked forward to the WNR... but THEN..............
Staphylococcus lugdunensis paid me a visit.  Saw the dermatologist the previous Monday and he said I could get sick pretty quickly if it went beyond skin abscesses, and he gave me some pills... well last Monday morning I came home early from work feeling rotten, slept until about 7pm, and woke up with an awful fever.  Wife called Dr. Derm and he said "Get that guy to the ER." So there I spent the next four hours downloading IV fluids and medicines, getting a chest X-ray and blood cultures.  Sometimes this stuff can get into your heart lining and... well, impede your cycling performance pretty bad... so good thing Dear Wife brought me in. 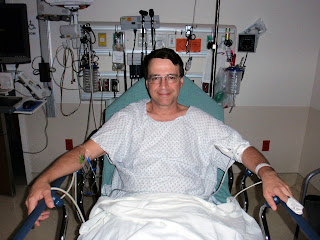 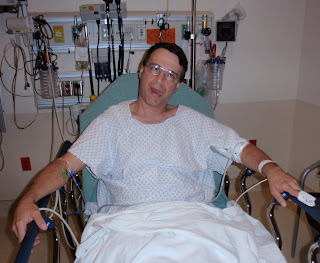 The "delirious" shot.
So as of today, I'm feeling much better but not really up to Diablo Standard so I've been sleeping late and taking lots of pills and hoping to click in to my new pedals soon.
Posted by Diablo Scott 7 comments:

Yesterday it was so cool and windy that I joked we'd need tights for this morning's ride.  Wasn't far off, but I toughed it out with regular shorts and jersey.

JB got to the Gate shortly after me  - he brought his winter jacket but packed it away for the ride.

Wildlife Encounter:  a cute bunny with a cotton tail... looked like he was just waiting for something to catch and eat him.

Near Son of Chainbuster a guy coming down asked us if we had seen a penny farthing coming up... nope; pretty sure I'd remember that.  Wondered what the deal was though.

At the Junction there was a guy with this cool helmet; 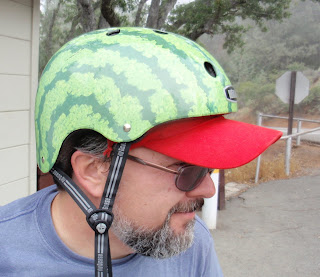 Then I checked my phone for the results of today/s Tour stage and everyone told me not to say.

JB wanted to stay at the Junction a while longer so I went down alone and met the penny farthing guy at the top of the Bump! 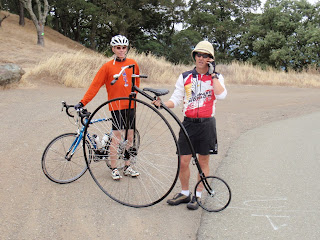 He said he got it from Ridable Replicas in Alameda.  Neat bike; 48" wheel.  Boy, I don't see anything resembling a brake on that thing... do you?  Usually on these bikes there was a spoon/shoe under the fork crown that you would press down onto the tire but this one appears to lack it.

What's in YOUR saddle bag? 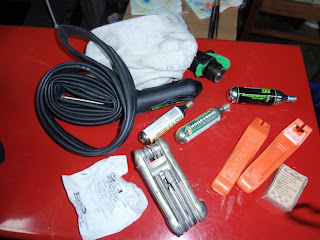 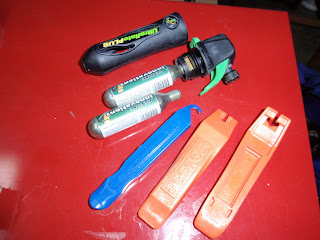 A couple weeks ago I had a flat and broke two of those blue levers trying to get the tire off.  Went to SportsBasement to get some metal ones and the guy recommended against them and said "no way" would I break these Pedro's levers... so I bought em... I suspect he was right.  Anyway - blue Park levers suck, orange Pedro's levers rock (also come in pink, yellow, and green).
Also, it was the first time I'd used my new "threaded cart only" inflator, and I didn't realize that you have to screw the cart into the head by hand - on my old one you just screwed the head onto the body and it punctured the seal.  Took me a while to figure it out but it's actually a pretty slick connection.
Posted by Diablo Scott 2 comments:

Good day for a non-Diablo ride.  Club ride started in Dublin and rode out Dublin Canyon Road and Redwood and a bunch of fun little back roads to the Oakland zoo.
I split my time between riding with the two or three fitness fanatics (multiple Death Ride survivors, and Triple Crown royalty) and the ordinary middle-aged fitness buffs.  Worked out pretty well.  It was kind of an odd crowd because there were a lot of members at the Death Ride today and a lot of others that are doing the Davis Livestrong ride tomorrow so we were kind of the everybody else group. 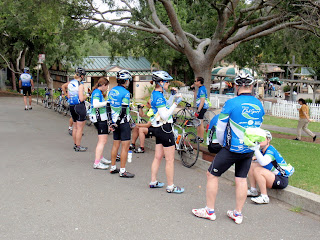 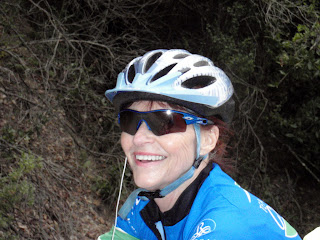 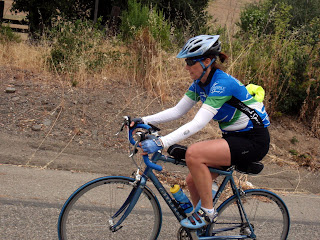 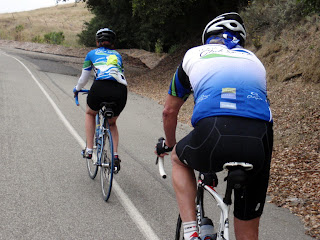 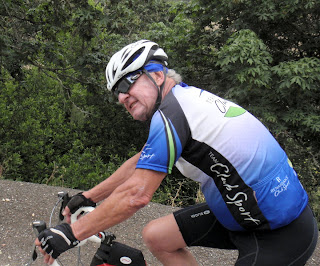 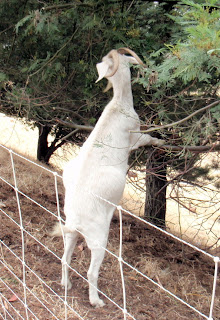 Got a flat just a few miles from the finish and I told everybody not to wait.  Got it fixed in time to hammer back to the parking lot just as the last guy was finishing anyway.
It was a lot of fun going through some areas I hadn't done before.  Click on the video for a 29 seconds of avaunt guard artistry and special effects.
And finally... best wishes for Chris Horner.

HAWT!  One of those days you just want to get it over with...
Frozen water bottle trick worked a little bit.
There were a zillion squirrels out too, lying in the shade until you got close to them, then they'd run away.  Little ones, about the size of rats. 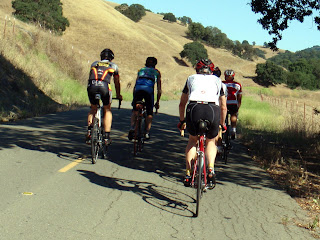 I drafted these guys for about 3 revs in my 39x21... it was awesome.
After that I chased "The Girl With The Yellow Tires" and pretty much kept her in sight the whole way up but never managed to get closer than about 30 seconds.
'Possed to be cooler this weekend... booyah.
Posted by Diablo Scott 2 comments:

Met JB at the Gate and we rolled.
Somewhere on the Bump he unleashed his inner Contador and the elastic snapped.
Not nearly so many people as last week, but a large number of them were already descending, so they must have gotten a real early start.
Then down the south side and the Hole.
Wildlife Encounter:  two groups of black tail deer with spotted fawns.
Going to be real hot the next few days.
Photo editing software buggered up my snaps again, so I'll just leave this here. 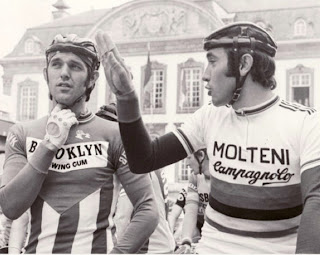