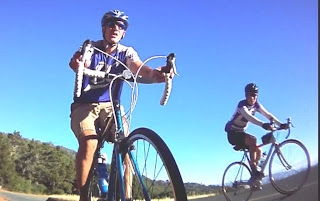 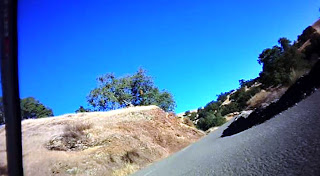 ﻿
Posted by Diablo Scott No comments:

Just back from a vacation where I had a wonderful time in SoCal even without my bike.

Diablo regular Tall Charlie from work went to France with a cycle touring company to ride up Alpe d'Huez and sent me his greeting from the summit!

This is totally click-worthy.

Rolling hills with the health club team, I think there were twelve of us.

Roadkill Report:  a deer :-( on the side of Danville Blvd... a big hole in his side was being eaten by bugs and stuff.  Also a cat in the foothills.

One guy crashed near Diablo country club, and another guy hopped a curb to miss him, but he didn't quite make the whole curb and he exploded his tire - very impressive and nobody hurt.

We rode through some gated zillionaire neighborhoods and everyone made complete stops and rode single-file so as not to piss off the elitist seculsionaries.  I figure the best outcome that'll ever come out of Stop Sign Gate is that riders will be respectful and owners will be tolerant and we'll have a semi-stable detente.
Posted by Diablo Scott No comments:

Garage flat this morning.  Pulled a big rose thorn out of my front tire and fixed it while I watched Le Tour... first stage in the mountains and exactly what a mountain stage is supposed to be.

Anyway, got to The Gate late and started about 8:15.  Almost caught JB at Clavicle Cracker but then he flamed up the afterburners and beat me to Junction.

Then I went up to Juniper solo. 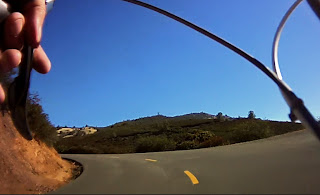 HOT - remember to ride within yourself. 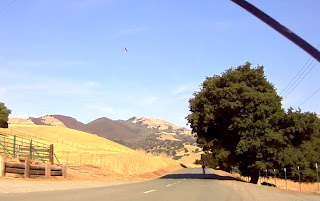 Two frozen water bottles.  Melted faster than I could drink them. 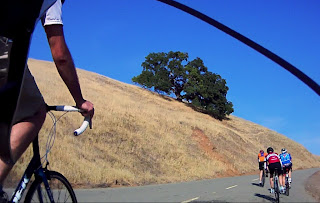 Tall Charlie is going to France to ride l'Alpe and other iconic TdF mountains.  One of his friends asked him for an Alpe d'Huez jersey and I said "Maybe they sell one that says 'MY FRIEND RODE UP ALPE D'HUEZ AND ALL I GOT WAS THIS STUPID JERSEY!"
Posted by Diablo Scott No comments: