Twist and Shout Work It On Out

Three weeks post pelvis-fracturing crash.  An hour on the recumbent stationary bike, and an hour on the treadmill.  Really serious boost to the old morale to get things moving again on the bike, but the treadmill was almost like really walking.  I could completely control how much I was supporting myself with my arms and after a few minutes it wasn't painful at any point in the stride.  I still feel like I could get a spurious rush of bone pain at any time that would send me to the floor, so having the rails on the treadmill to hold on to was great for my confidence. 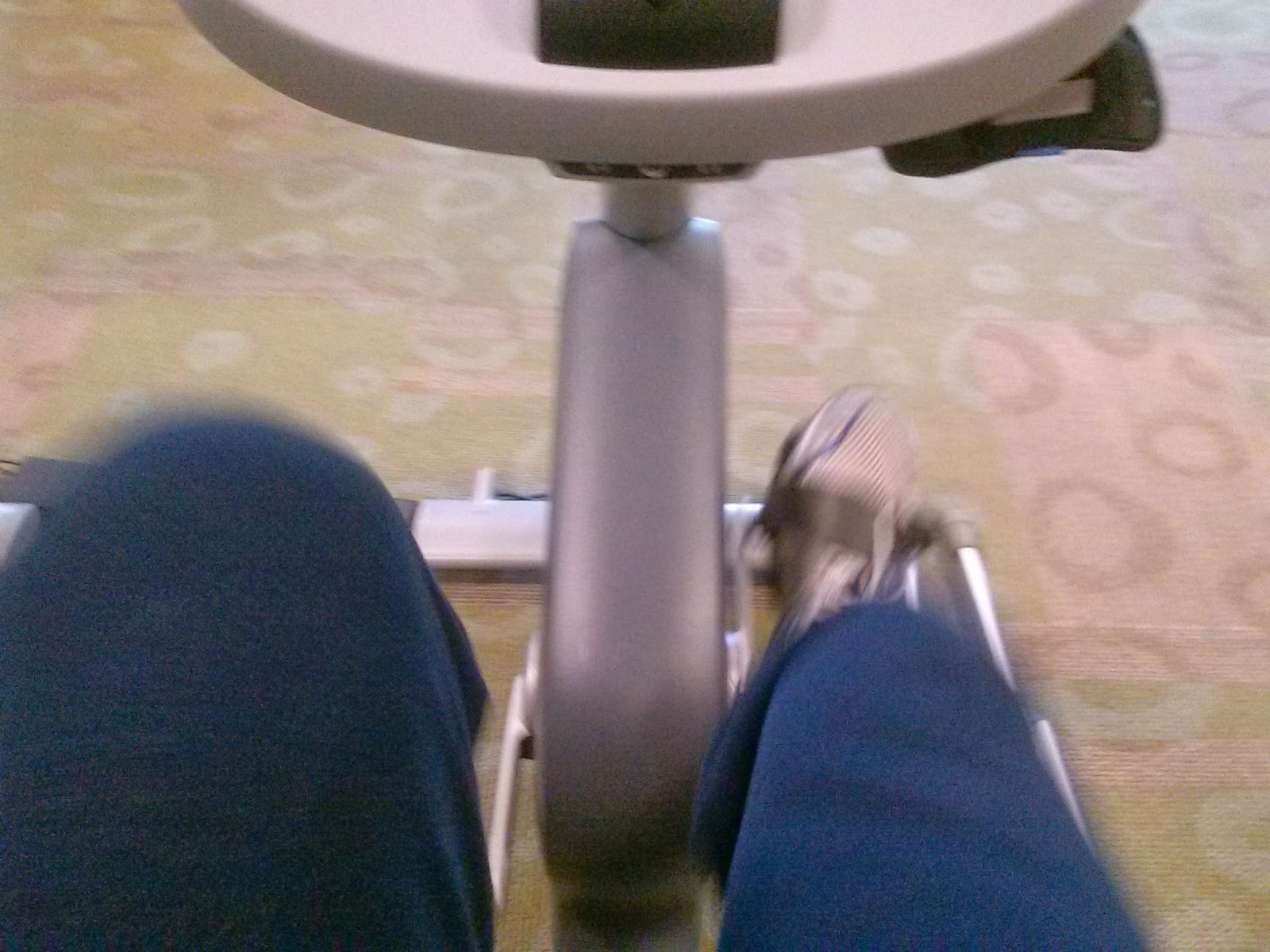 The ortho doc told me it'd be three weeks before my first good day; I didn't know what that really meant until today.

In other news, some bastard STOLE MY COMMUTE BIKE!
That bike was a true one-of-a-kind.
I've been fantasizing about thief torturing.

I'll just keep all my recovery status entries here as one post (rather than make new entries for each), drop by daily if you're interested - won't be any ride reports for a while.  Newest posts on top.

19 days post crash and had a doctor follow up appointment today.  They took an X-ray, did some poking around and leg manipulation and said I'm healing fine.  Dr. Coufal says I should do some stretching and can start riding a stationary recumbent bike at the health club - I'm going to have to get over my aversion to looking like a dork; most of the people on those things are pedaling 20 rpm while they read magazines or update social media on their smart phones.

Not off the crutches yet; disappointing but only because I wasn't being realistic in the first place.

Felt good enough to do some laundry yesterday and I did a close-up inspection of my bike clothes - nothing but a little dirt... no tears, no scuffs... I'll have to find another justification for buying some new bibs.  Also got some photos of the bike damage... I don't think the saddle scar will be a problem and I needed new handlebar tape anyway. 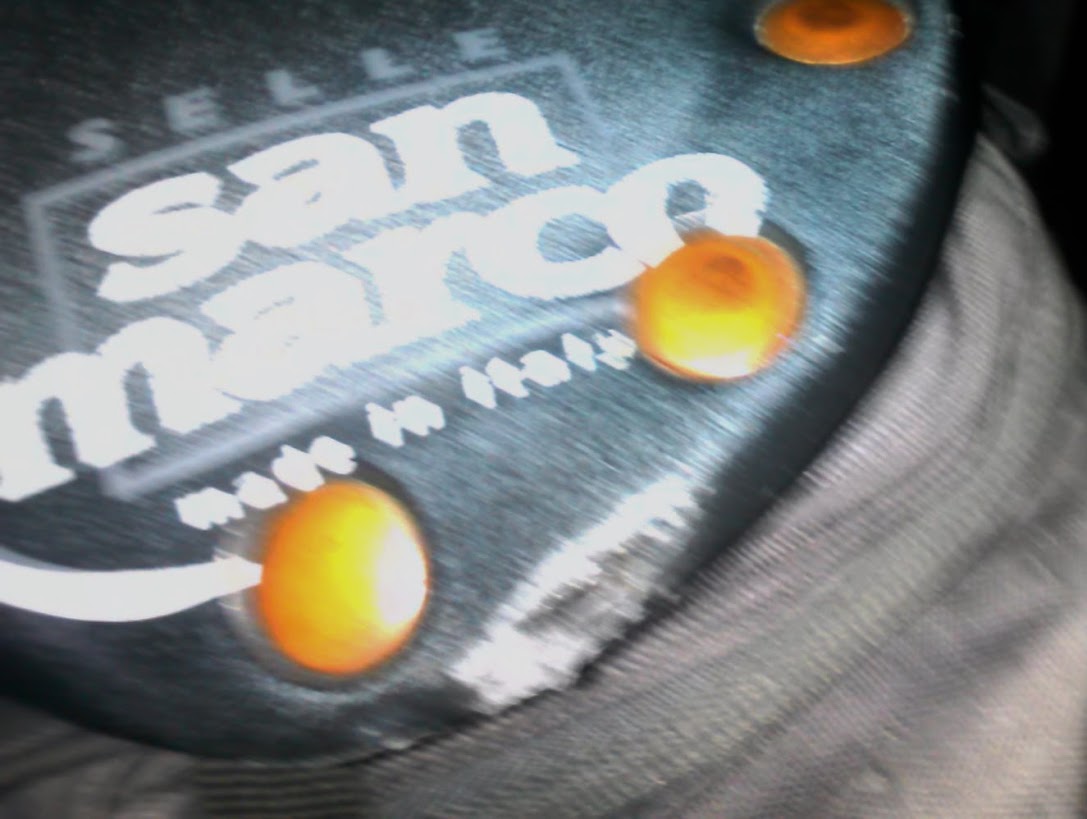 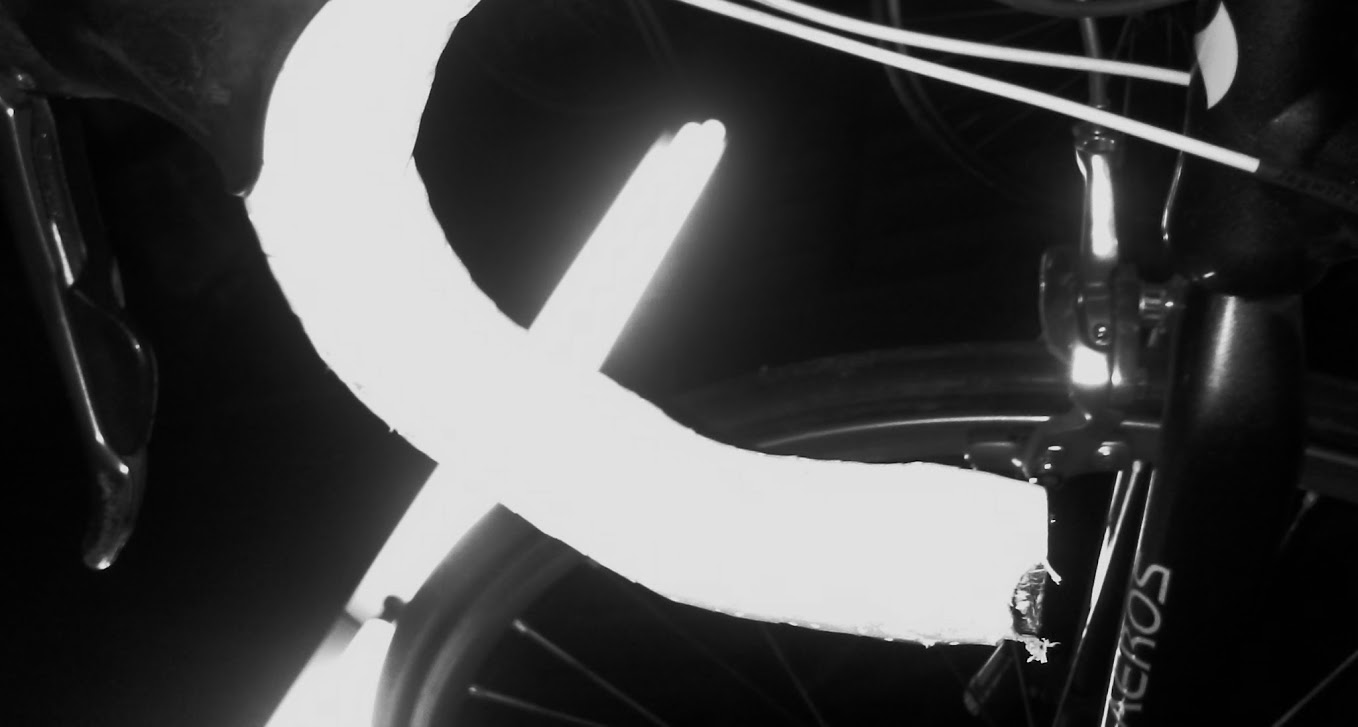 Two weeks post pelvis fracture.  I have a lot of good moments when I almost feel like I can walk, but when I try to use just one crutch I get a reality check... not ready.  Still, Orthodoc said two weeks with no weight on the leg so I'm going to start testing it a little bit... might be just something I have to work through.

Still haven't gotten a firm appointment for my Ortho follow up, but I think I'll be off crutches by this weekend.  Usually I'm not in much pain but every once in a while I'll bump my leg into the wall or something and get a reality check.  Down to two Percocets per day; when I run out I guess I'll just take Aleve or something as needed.

Showering in the tub/shower is going well - I use the walker to get in and then I just don't move around much when I'm in there.

Driving is going well also, no problem except that I hate sitting in traffic.

I have dreams about walking normally.

Felt good all weekend except I tweaked my left leg somehow, making walking extra painful for a few hours Saturday night.  Much better on Sunday and I even did a test drive in my truck - yes, planning on driving myself to work tomorrow... things went fine: I can get in and out OK with my crutches and use all the pedals so no problem.  Also planning to use the bath tub shower in the morning.

A friend at work said he might come over next weekend and we could brew a batch of home made beer - he'd do all the heavy lifting in exchange for half the product and some lessons in mashing.  I should be mostly off the crutches by then.  I'm supposed to have a follow-up appt with my ortho doc in a week or so, but his office won't call me back.

Getting around on crutches OK.  First thing in the morning I need the walker until the pain pill kicks in. Gradually then the pain shifts from an excruciating broken bone kind of pain to a more tolerable dull and sore, achy kind of pain.

I'm anticipating a really boring weekend... maybe have to download an audio book or something.

No biggie - got up early, went to work, did a full 8 hours.  Everyone wanted to help me do something so I had them carrying papers from the printer to my office, get me water, things like that.  Still significant pain but not feeling so useless.

Practice with the crutches today went well, still too hard to get in and out of bed, or up and out of chairs unless I've got my walker or something sturdy to hang on to.

Also my first SHOWER !!!  That felt great.  We have a smallish stall so I wasn't afraid of falling over and I would've stayed in there longer except I was standing on one leg the whole time and it's getting tired of doing double duty.

Going in to work tomorrow, hoping for the best but not expecting a full 8 hours.

Things are going a little better.  Wheelchair tour of the neighborhood was enjoyable but all that arm cranking kind of aggravated my rib bruising so that feels worse now.  The wheelchair is for total invalids and isn't designed to be self-propelled for distances greater than the length of a house.  I'm going to try the crutches again today - if I can use those then I'll try getting into my pickup - and if that works I figure I can go in to work at least for a while.

Lots of time to make videos, not much material to work with.

There's no way I can get in the bathtub, PT guy said the shower stall is a better option so I can do that as soon as I'm confident standing in there for a while.  In the meantime, I've been giving myself sponge-baths by sitting on the toilet and using the no-rinse skin cleanser the hospital gave me.  It's possible the Percocet is interfering with my olfactory receptors, but Diablo Wife assures me these sponge-baths are more necessary than I had evaluated them to be.

A few photos from Saturday's ride: 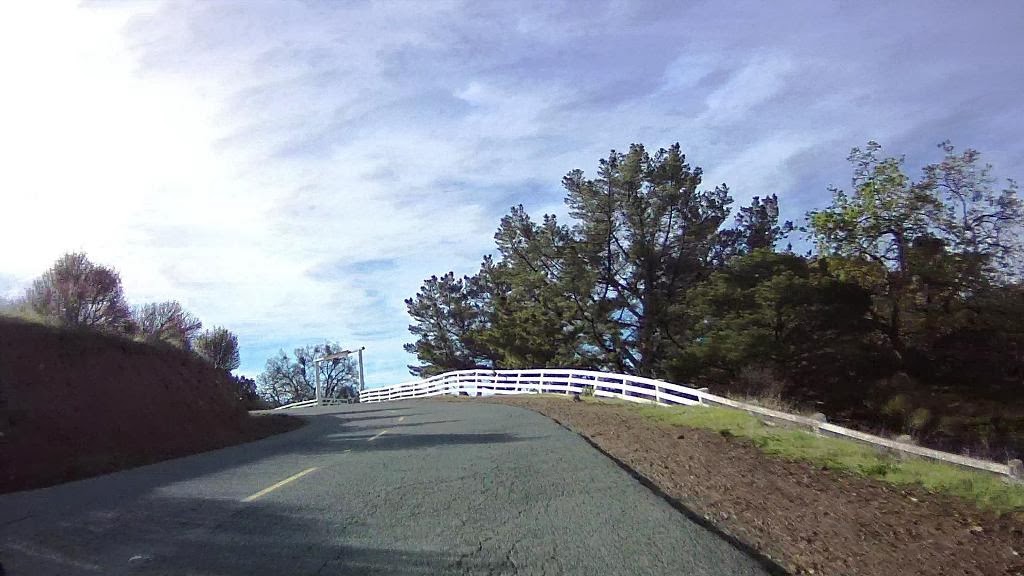 UPDATE Monday March 10
Today I let my pain meds wear off just to see what my untreated pain was like.  Script says 1 pill every four hours, and by six hours I concluded this was a dumb experiment.

Doing anything in the walker is really slow... took me almost 30 minutes just to get a cup of coffee; and I had to drink it standing up in the kitchen because I can't walk and carry a cup.

JB came over after work to help me do a bike inspection and put things away.  My saddle is a little scarred up, and the handlebar tape will need to be replaced, but the frame and wheels and components are all fine... that was a big relief.

I again told the story about how I had hit my helmet on the pavement but it was undamaged - he looked at the microshell and agreed there wasn't even a scuff mark.  Then Diablo Wife picked it up and said "What about this big CRACK?!?!?"  Sure enough, the foam was cracked even though the shell looked like new.  Thank you GIRO !!!  I'm going to get an exact replacement.

Looked through my bike-cam videos and the file with the crash somehow got broken - don't have anything from the descent below Junction.

Thanks for all the well-wishers on Strava, blog comments, and e-mails.  Tomorrow:  wheel-chairing around the neighborhood.

UPDATE Sunday March 09
Woke up in the hospital and they gave me some of the serious pain killers before Jim the PT guy came to see me.  He taught me how to use a walker for my injury - no weight on the left foot; so I move the walker, move my left foot forward and just make contact with the floor, then support all my weight with my hands on the walker while I scoot the right foot forward.  Jim said most pelvic fracture patients don't want to move at all, so I was doing well with two laps around the orthopedic wing.  He said he'd tell the doctor I was cleared to go home from his perspective.  The Ortho MD didn't show up until about 4pm and after he assessed me also cleared me to go home.  Had the opportunity to enjoy one more hospital meal before they got around to releasing me though.

Those pain killers can cause constipation though, so that was starting to be a problem - my ribs are a little bruised and applying sufficient pressure to expel the intestinal solids was painful and ineffective.  Had a glass of Miralax at bedtime instead of my usual Rooibos tea.

UPDATE Saturday March 08
2014 SMR 10 was a great ride.  The weather was beautiful, my first ride of 2014 in shorts, no jacket just a wind vest; felt great all the way to the Summit.

Search and Rescue was having a practice drill with staging at Juniper.

AVISO-  water is turned off at Junction and Juniper, plan accordingly... still available at the Summit water fountain. 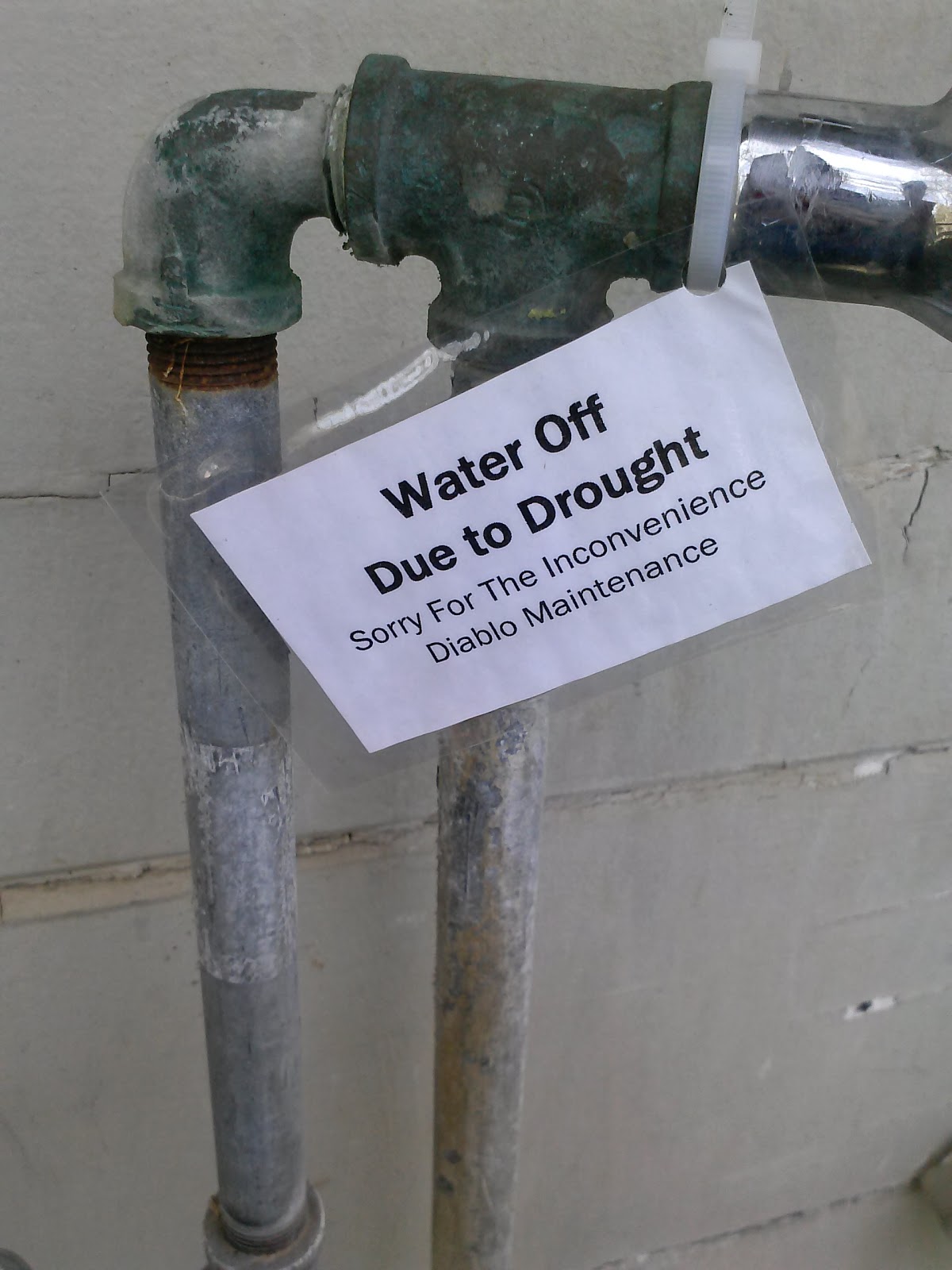 Descent was pleasant as well.  But then off the Mountain, off North Gate Road, at the traffic circle where Oak Grove, Walnut Avenue, and Castle Rock Road come together, I hit a patch of slippery stuff while leaning into the tight-radius left turn and BAM, went down hard on my left side.  My helmet hit as well, but I didn't see any damage.  The traffic circle was full of cars, but the guy behind me in his pickup was a good driver and stopped well clear of my crumpled heap of flesh.

JB saw the whole thing happen and he and the pickup guy (PG) got me loaded into the truck for a ride home... PG told me his name but I've forgotten already.  I was in serious pain and couldn't even stand up without help.  PG got me home and into the wheelchair I have in my garage, and wished me well.  It took me about an hour in the wheelchair, and multiple failed attempts to stand up with crutches before I allowed Diablo Wife to take me to the Emergency Department at John Muir Hospital.

Triage included leg manipulation, X-rays, and CT scan; diagnosis = three cracks in my pelvis.  No surgery necessary, but they admitted me as a patient and gave me a room.  Diablo Wife, Diablo Daughter, and Boyfriend of Diablo Daughter all stayed with me in the patient room until lights out.

Dang, it was windy today.  Good day to not Summit since I didn't have time anyway. 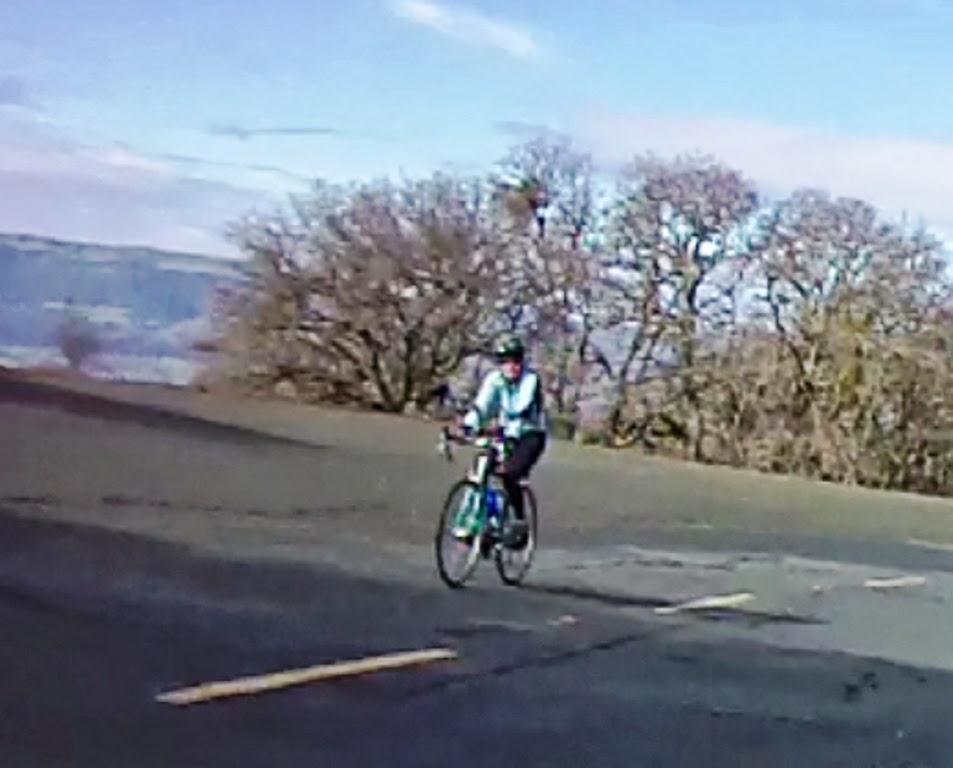 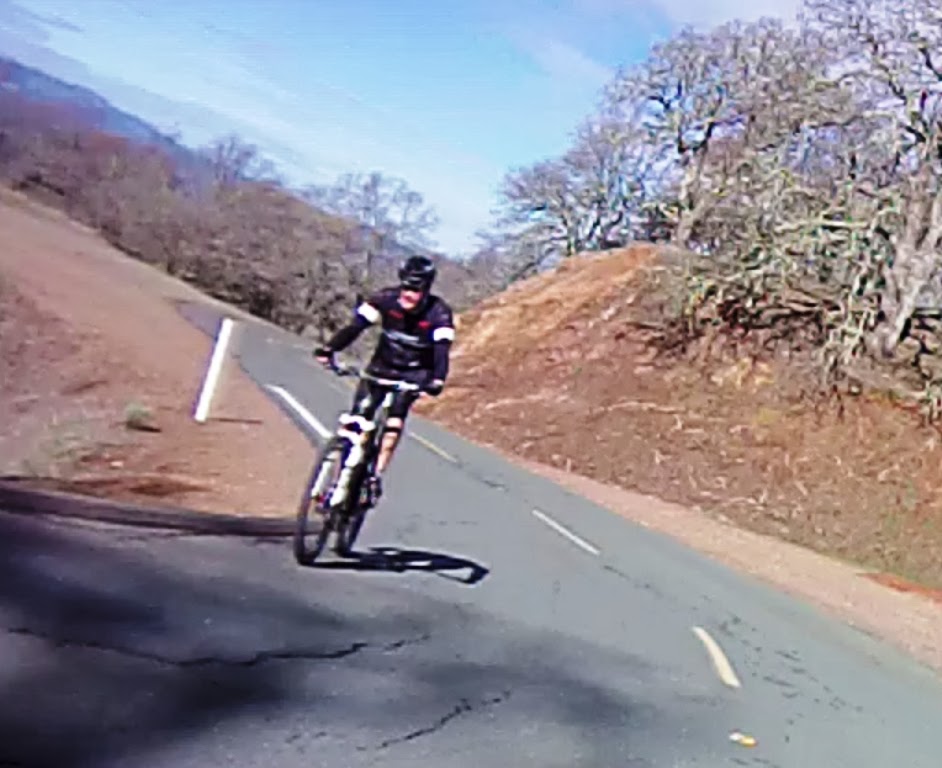 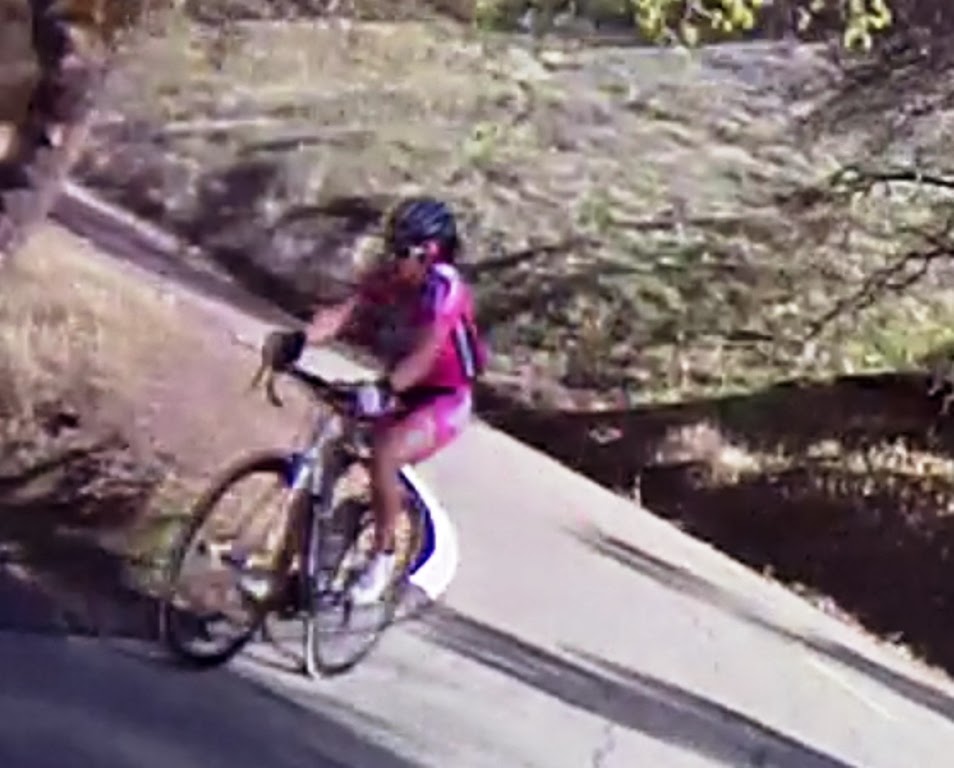 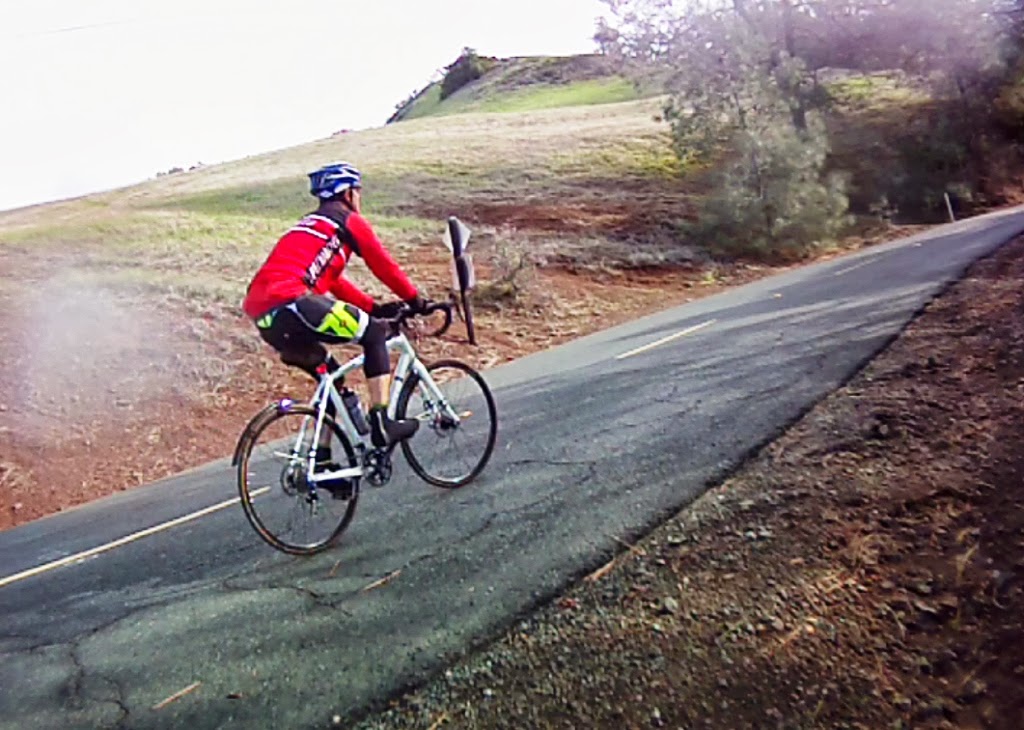