My broken back pain is getting better about as quickly as I could expect; but I promised myself I wouldn't bite off too much too soon so I pre-self-limited to a Juniper today no matter how good I might feel.

This morning started off pretty cool, but I knew it wouldn't last, so I went with arm warmers that I could roll down as needed.

At Junction a guy was coming down from Summit and he blew a tire right at the intersection; it was loud and obvious.  I said that was a good place for such a thing to happen and he said yeah, because it was a borrowed bike and he didn't have a pump but there was one at the boy scout bike box.

Charlie has been experimenting with ways to get in a few more miles to his weekly routine, and Wednesday he did "Junction plus 10 minutes".  I thought that was a neat challenge - see how far you can go up Summit Road in 10 minutes, and then do better next week; so it's a distance challenge instead of a time challenge.  I call it "Ten Minutes of Summit Road".  I told JB I might go for it if I felt good, but then I thought it would be a good idea to get a baseline value and just rode my normal Summit pace; I tried to do a lap counter thing on my Garmin but it didn't work so I checked Strava when I got home and my result was about 0.95 miles - about at the Toyon/Round Top driveway.  I should be able to get 1.7 miles or so if I push it and I'm in good condition... that'd put me about at the equipment storage area where that tight turn is (Slow Down Rick!)

A little farther up, a rider passed us that looked like she was doing a pace I could match so I rode behind her up to Juniper - that was a nice effort to end the climbing and not over-do it. 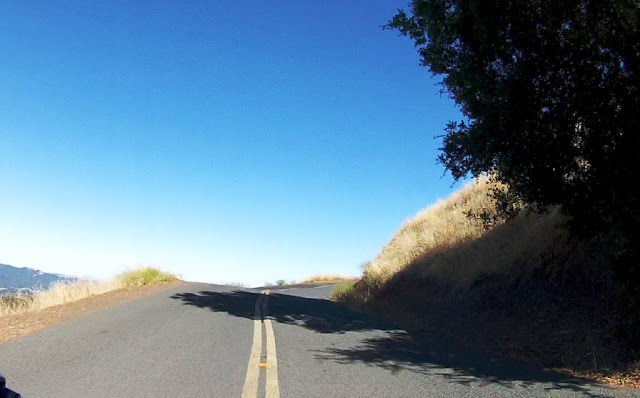 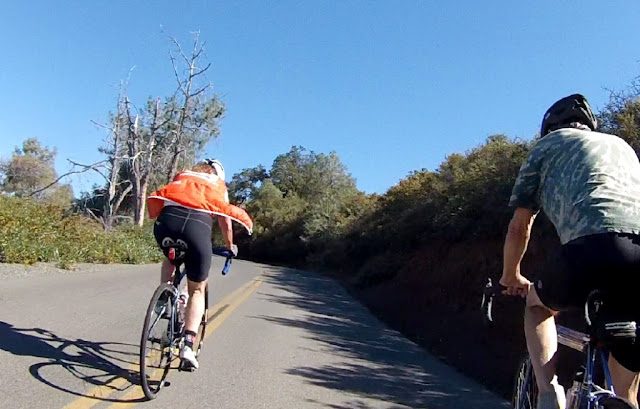 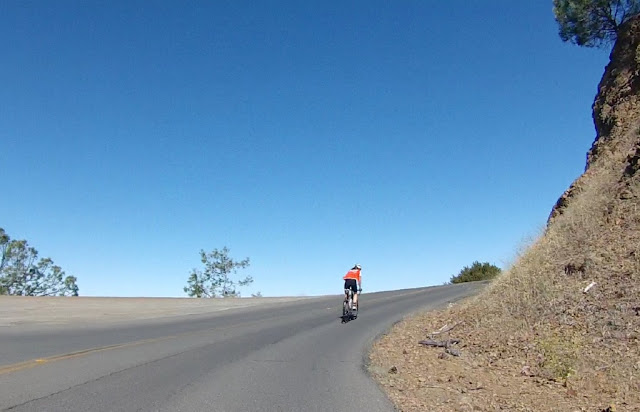 Four weeks and two days since my seizure and vertebrae fracture.  On Wednesday I did a trial ride to make sure I could handle the Klein and the cleated shoes - rode up to the Dumpster Gate at the end of Segment 1.  It went fine so I was looking forward to a Saturday Morning Ride.  I texted JB so he would know and maybe take it easy on me.  I figured I could do Junction and I wouldn't attempt any higher than that; even though I feel pretty good on the bike, I've been a little more sore than I expected afterwards.

OK, here's a good story - we've had a few run-ins with the Ranger at The Gate... he tells us not to stop at the place where we always stop and he seems to be overly dictatorial about his rules that don't really have any meaning.  JB calls him the "Gate Nazi" but he's really more like a Hall Monitor.  So today JB was stopped at an approved stopping place where he took off his jacket before the ride, and he was kind of obscured by this tree in the photo.  Well the Hall Monitor came out of his shack shouting (at me) "Tell me he is NOT going to the bathroom behind that tree!!!"  I assured him he was not and Hall Monitor returned to his sentry box in anticipation of finding an actual rule breaker to yell at.

Although I was ultra careful riding my first Diablo since the injury, I felt pretty good and was doing an OK pace... didn't feel like I was slowing JB down too much. Started off kind of cool and I was in a long sleeve jersey but I was a little too warm by Junction... no biggie, it's almost July after all. 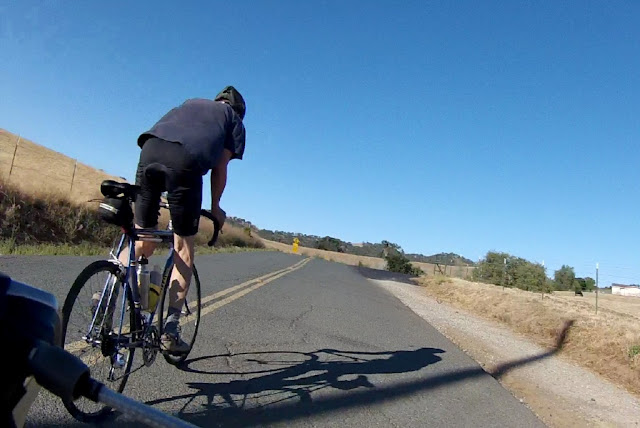 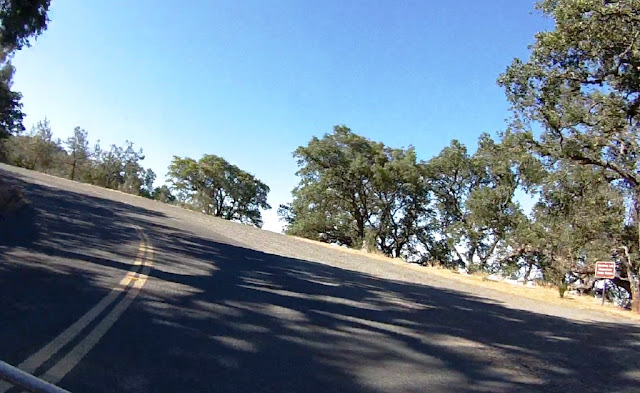 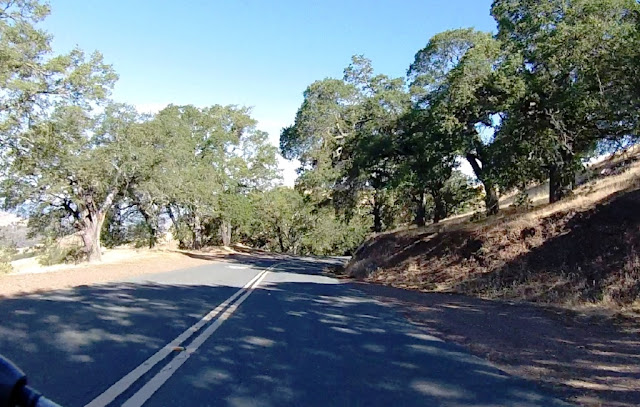 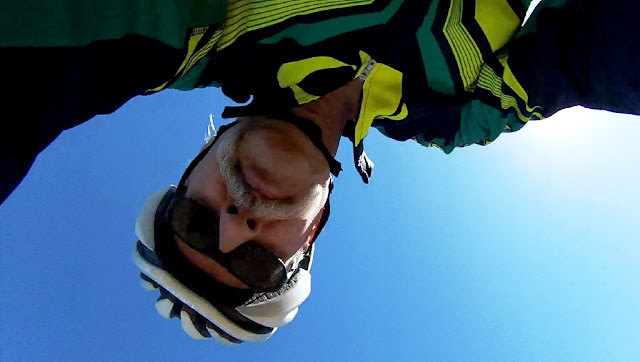 JB continued on to Summit and I made sure he wouldn't worry about me going down alone.  It was a nice descent and I took it easy because my back was getting a little stiff.

Then on Walnut Avenue, near the fire station I picked up a drywall screw and ruined my rear tire.  I managed to patch it well enough that I didn't have to walk home.  #TheLastFlatIGot 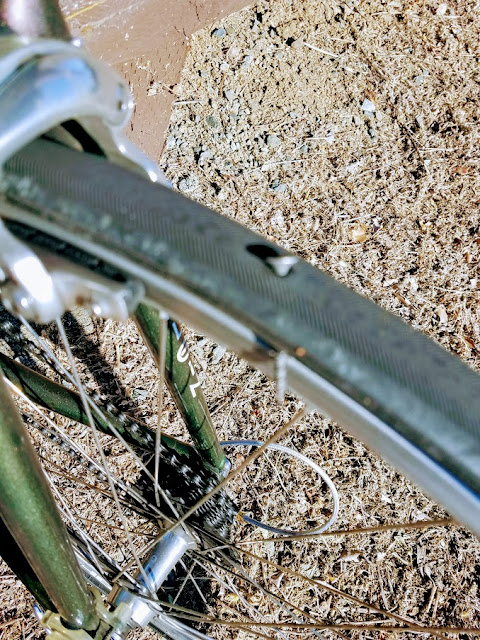 Checking through my supplies in the garage, I found a whole bunch of new and used tires that I had stashed away for just such an occasion so I was able to do a more permanent repair and re-stock my saddle pack without a trip to the bike store.
Posted by Diablo Scott 2 comments:

He's home recovering from a Grand Mal Seizure and a compression fracture of a vertebrae.

First time for either, and I never thought that would happen and no idea why it did.  I feel pretty normal except my back gets sore and tired all the time... so save the PITY for somebody else.  Had a couple dozen scans and lab tests in the hospital and they all say I'm a healthy old bugger. I wear a back brace and walk with the help of a walker and I can't lift things heavier than my cat.


Over the next couple weeks I'll be weaning myself off of the pain pills. I estimate I'll be riding my commute bike around the neighborhood by June 18 (that'll be four weeks post seizure); and my next  ride up Diablo will be before the first of July.  I have no idea if that's realistic but I needed to make a plan.

And if anybody were to offer to mow my lawn... well, I'd accept your offer.
Posted by Diablo Scott 5 comments: