Met JB at the Gate. Got really lucky with nice weather between two heavy precip periods. 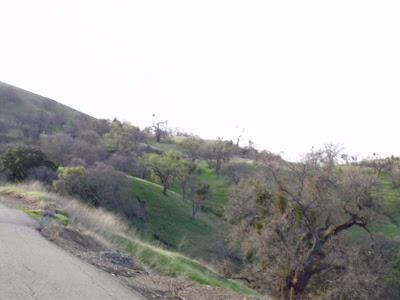 Not very many riders up the North Side today. Saw a lot more coming up the Easy Side though while we were going down. 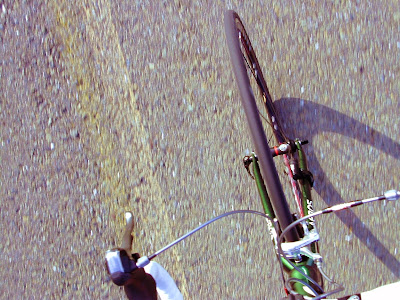 Spotted local celebrity Alison on Danville Boulevard; I always give her a shout out... she's been all over the world with them pink panniers, and she isn't packing styrofoam, and she always returns the greeting. From now on I'm just going to call this an "Alison Spotting". 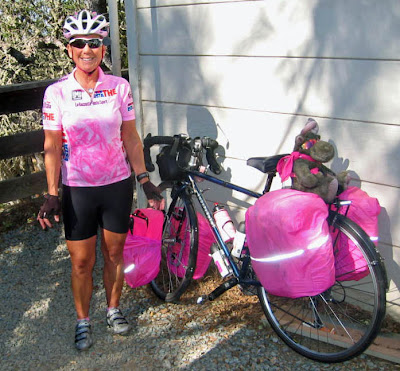 Me and Rick rode our MTBs to the KOM at the top of Altamont Pass. 18 miles each way. It rained on us the whole time we were riding but was relatively nice while we were there and when the race came through. 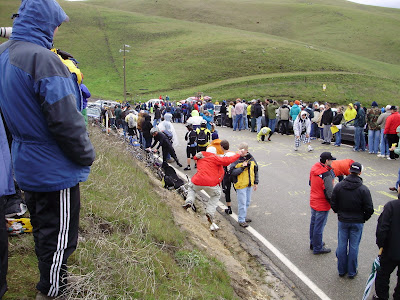 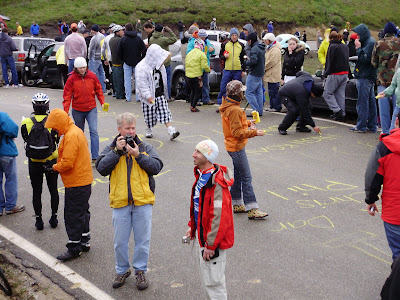 Chalk graffiti on the road. 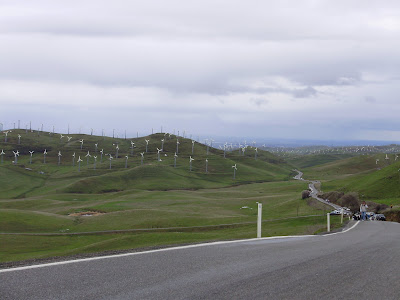 Windmills just over the top. 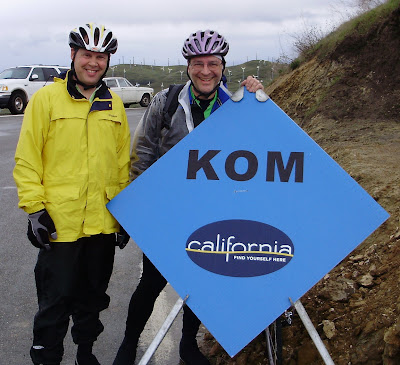 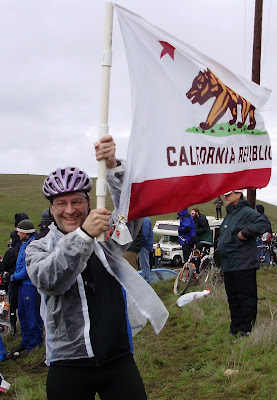 This guy wins the prize for biggest lens.

2009 Tour of California - Stage 1 Finish from Diablo Scott on Vimeo.

That's me with the flag, and dear daughter in pink.

Tour of California
If you don't see the embedded video...
For my super fun video of the Stage 1 finish, click HERE.
Posted by Diablo Scott No comments:

This was the view of the Mountain from my office window last night:

Clearly this called for a Saturday morning bike ride.

Got to the Gate and met Rick and then realized my front tire was flat so I changed it while waiting for JB to show up but he never did although Dudley rode by before I was done.

Road was wet but the sun was up and it was kind of windy in spots so it was some good riding.

Front tire went flat AGAIN near Son of Chainbuster... I just pumped it up and made it to the Junction for another change and aren't I smart for carrying two spares?!? Junction ranger said the road was closed at Juniper but it would be OK to go around the barrier so up we went. There were quite a few cars up there already and a steady stream still going up around us.

Things got sloppy up above 3000 feet but it made for some good photos. Got some video that I'll link to later. 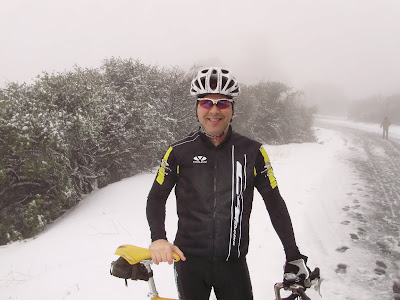 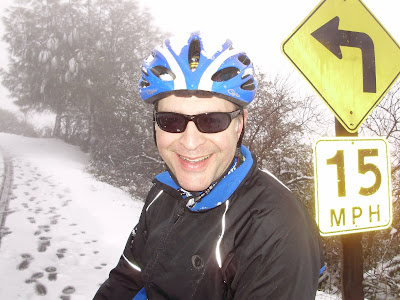 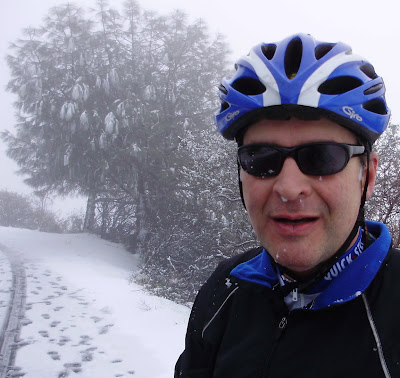 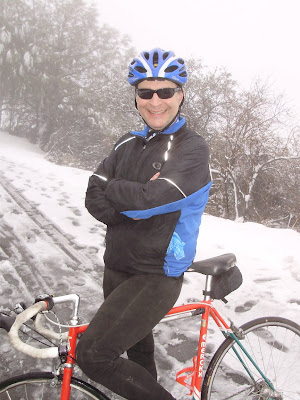 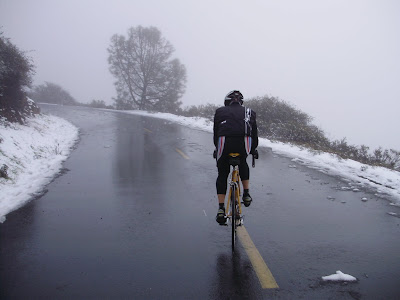 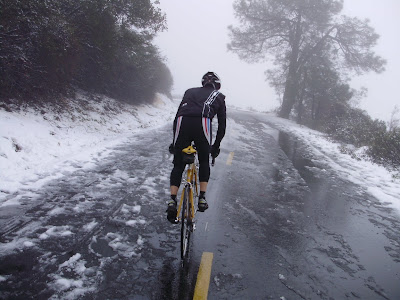 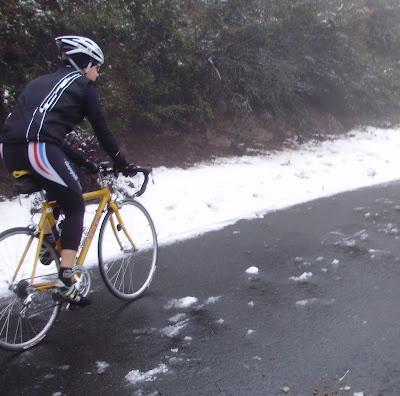 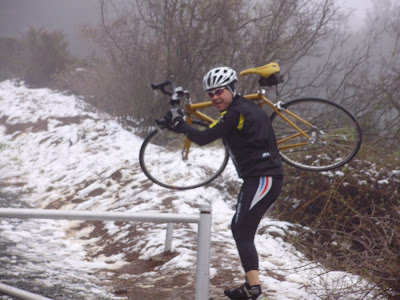 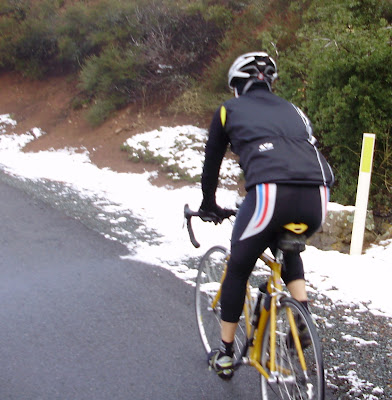 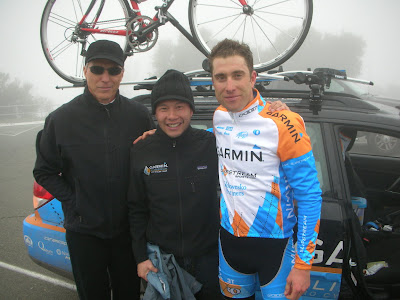 Christian Vande Velde with his support crew at the Summit on Sunday... unfortunately a bad weather day.

Also got passed by some mesomorph with white knee warmers. 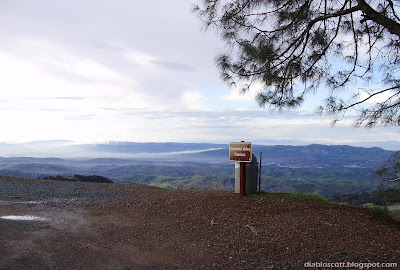 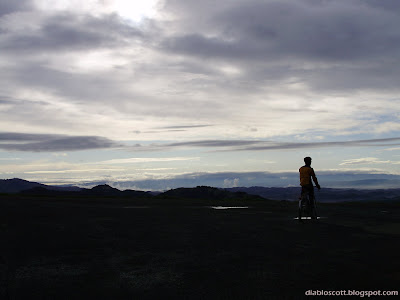 Cold and windy so we turned around at the Livermore Outlook.