Gate was closed when I got there - I guess the cashier overslept or something.  There were about three cars in line but the bikes were going around the side so I did too; a ranger told me that was OK one time.

JB had enough and I decided to do a Bump d'Bump.  Lots more people on SGR, and it was a lot shadier.

After I met the enthusiastic young ladies at the Junction last month passing out flyers for this ride, I knew I had to do it.  Sentinels of Freedom helps wounded veterans re-integrate into society, gets them training, and helps them find jobs.

The route looked pretty cool - a nice replacement for the defunct Diablo Century.  Starts in San Ramon, goes up the Easy Side, around back to Morgan Territory - and then 55 miles of mostly flat.

Put the word out to the health club team and we fielded twelve riders - me and Bob were the only ones who did the full 100.  Bob's a strong, steady rider - perfect for centuries.  I tend to get a little too excited when a pack of fast guys comes by and burn matches that I should be keeping in reserve.  We stayed together sometimes, and split up sometimes, and re-grouped at the rest stops. 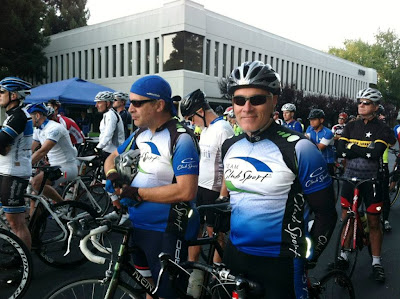 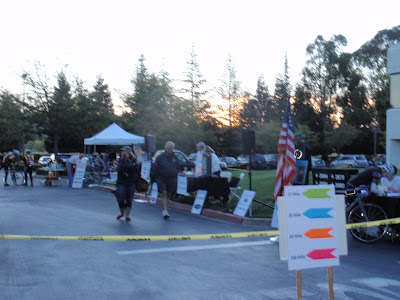 I prepared a Ride Management Plan that was a little on the optimistic side: 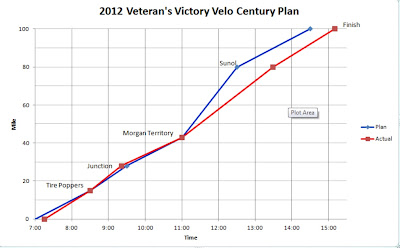 Mass start after some speech making and flag waving - got going about 15 minutes late.  Finished about 40 minutes later than my "Early Finish" time but mostly kept on track until a sore on my foot started to hurt and the leg cramps started to get bad.  The sore turned out to be a tiny sliver that got irritated from all the commotion.

I thought I had a pretty good plan for electrolytes too, but maybe my cramps have other causes that  electrolytes don't help.  Anyway, GuBrew Electrolyte and Cytomax in the bottles, E-Gel for calories, and three Endurolyte E-Caps at every rest stop.  But by mile 70 I knew it was coming, by mile 80 it was hurting, and by mile 90 I had to stop a couple times in serious pain and shake it off.

Roadkill Report:  THREE skunks... rather recently separated from their lives and scented oils.  Also, one opossum and one racoon.

Almost all the riders only did the 60 mile route, so by 3 o'clock when I finished most of the after-ride activities and schwag tents were closing down.  Did get a cold veggie burger and a warm beer though!

My Contour GPS camera has a 16GB micro SD card and it lasted for 5 hour of video at the lowest resolution.  I packed four batteries and only used three, so I think a 32GB card 5 batteries is the order to make sure I get a whole century recorded.... I don't like my videos to be too long though so it's a lot of editing, but if a bear runs in front of me I want it on camera.

Friday night I did a general clean up and safety check and determined that my rear tire was worn but still had at least another 100 miles in it so I didn't change it.  When I got home I checked again - wow... I don't think I had 101 miles in it. 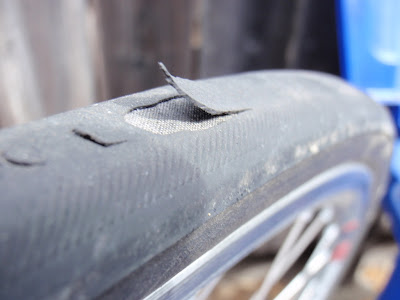 I don't know why I can't toss a tire that isn't completely toast.  I've had the spares ready for at least six months waiting for this.


How long should a century video be?  I promise never to be longer than two songs in the soundtrack.  Click below for the helmet cam experience.


And since I'm late posting - here's a shot of the space shuttle Endeavour flying over The Mountain Friday on its way west and on to LA. 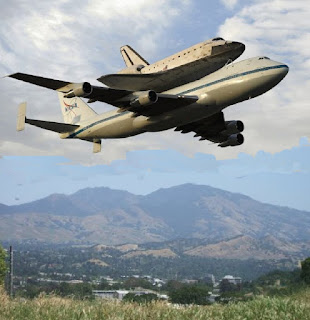 Not nearly so many people on The Mountain today as last weekend.

VeteransVictoryVelo century is next weekend so just a short one for me today.  You should sign up!

Or, you could sponsor me and feel good about that.

Wildlife Encounter:  Two tarantulas, and a guy with a huge camera photographing one of them. 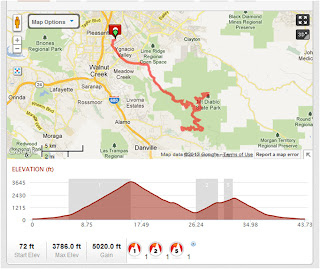 Wildlife Encounter:  deer in the trees below the Gate.  Nice looking young buck.

Wildlife Encounter:  another deer ran across the road in front of me near The Bump.  Funny how they never look before they cross, but then they stand there afterwards and check you out.  Somehow evaded the field of view on my head tube camera. 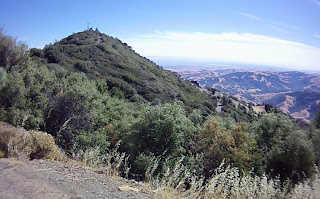 Spooky skies with precip in 'em.