I missed a ride last week for a rare weekend business trip so I was committed to riding today no matter what the weather. Luckily it wasn’t too bad. Not cold at all but lots of rain over night and more in the forecast. It wasn’t raining when I rolled out the door though so I was expecting a good ride.

Got to the Gate a little late and saw JB’s rock so I started up right away. Took off my gloves and unzipped my jersey and took in the sights. The normal streams were full of fast flowing water, there was even a miniature Niagara Falls near the farmer’s house at the bottom. The ditches were full of running snow melt, and in the few places that were flat, there were ponds of still water.

I first saw JB just below the Bump – he was probably a half mile ahead of me but I must have been going faster. With three miles to go I almost caught him but he apparently decided he didn’t want me to because after that the gap just got bigger. With two miles to go the rain started falling but it was just enough to be annoying. There was a ranger in his pickup who was kicking rocks off the road and he said to me “I think these little ones are the cause of most broken clavicles.” I agreed and explained that we called the corner just beyond there “Clavicle Cracker”.

So I get close to Chainbuster and JB has pulled far enough away that I knew I wasn’t going to catch him, and I pulled into the Junction probably a minute behind him. It was still drizzling and another rider came down from the Summit – he said it was even wetter up there. So JB and I decided going straight back down made the most sense.

After the ride I made a trip to the Performance store in Walnut Creek with my daughter. Dear wife had a couple of $10 vouchers from the expired Team Performance membership and I had a $10 off coupon if I spent more than $50. We decided to get some PowerBars and new tires for Eddy. If you’ve ever been there, you know there are some “Performance Customer Only” parking spots behind the store – well those were all full but I sort of thought it was OK to park in one of those other spots back there – NOT. Got a $20 parking ticket that blew all my savings from the coupons. So I won’t be doing much shopping at Performance any more – it’s not their fault that I got a ticket of course but that’s only part of it. Without the “Team Performance” incentive there’s not much to get me in there – their bicycle selection is really unexciting. Mostly I’ve bought tires, tubes, and Cytomax there for the good pricing but I think I’ll get that stuff off the web from now on and get other stuff from the smaller stores that I appreciate like Encina Cycle Center, Pleasant Hill Cyclery, Danville Pedaler, and Pegasus.
Posted by Diablo Scott 1 comment:

When the weather forecasters started talking about snow down to 500 feet today I resolved to go riding and bring my camera. It wasn't quite as white as they'd predicted but Mt. D did get a good dusting of flakes.

Nicole told me she and Rick wouldn't be coming and JB was sick yesterday but I didn't know how bad so he was an unknown. I ran a little late and got to the Gate at 8:07. No JB, no rock, I didn't stop. I rode the 5 miles there as fast as traffic would allow, trying to maximize workout effort and continued on up at a high aerobic pace. Seems like time to get serious what with the early Belgian semi-classics over and both Paris-Nice and Tirreno-Adriatico underway.

Wildlife Encounter: Two deer, way up on a hill looking down on me near the Bump. If I hadn't been looking for snow I wouldn't have seen them.

It was very cold and really foggy so visibility was pretty low and I couldn't see if the summit was snowy or not but we didn't get that much rain overnight so I wasn't expecting too much. Below the Bump I closed in on a guy that I thought was going pretty well and I might ride with, but he was an older guy actually going pretty slowly and when I passed him I saw that he was on a comfort bike and was wearing a backpack full of stuff. I said "good morning" and went right around him... I hope he drew some inspiration from my powerful riding style.

I grunted up the Bump thinking I was doing alright (couldn't find my HRM this AM) and checked my time at the Upper Washout: 24 minutes... head slap! Not fast at all. I actually thought I was on a low-40's pace... NOT.

So reality took some of the wind out from under my wings and the next mile took 7 minutes and I got to the Junction at 49 minutes. There was one cyclist there and we exchanged greetings and I hadn't seen any other riders going up or down other than the comfort bike guy. The monster SUVs were starting to fill up the available space and Summit Road was closed so I snapped this quick photo: 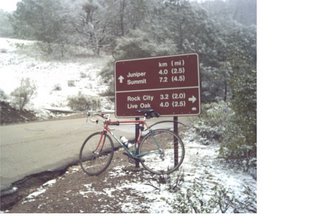 While I was there, I saw a guy with a Kelme jersey come up from South Gate and head up Summit Road without stopping or heeding the "DO NOT ENTER" sign the rangers had placed there. I really wanted to go up also but my midwestern respect for authority prevented me from being too brazen about bucking the rules. Turns out Kelme guy got turned around in short order and wound up going down the North Side within a few minutes anyway. I hung around the Junction for a while and the other guy there expressed some concern for going down in such cold so I told him "you're just underdressed" which he really wasn't but he was just being wimpish. Maybe his jacket was a little thin but it was just not that frigid.

So I went down a few minutes later, after putting on my extra gloves. My face and neck did get pretty cold but it's not like it was sub zero blizzard conditions. I saw a few more riders and a lot more SUVers coming up and down near where I saw the deer earlier one of the riders said "Hi Scott" and I realized it was Peter. It took me a few to downshift and turn around but I did so and chased him down. Peter hasn't been riding recently due to back problems so I wanted to see him. It really hurt in the glutes to hammer so hard at this point and I figured it was good pain. Peter was riding his Cannondale hybrid which was black and pretty cool with bar extensions. We chatted until we got to the bottom of the Bump and then I excused myself but he knew I just didn't want to Up de Bump again. Anyway, good to see him on the Mountain. Man, my butt muscles hurt. 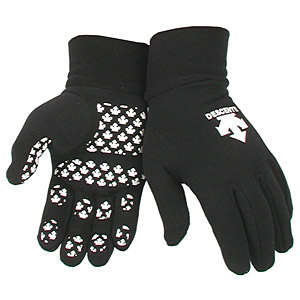 I've always liked the stuff Descent puts out. I wore Descente jerseys and socks in my early racing days. These gloves are REALLY great for my riding conditions - they're like really good liners with grippy things on the palms and fingers but they're warm enough to go without outer gloves most of the time. They don't block the wind much but they're much better than polypro liners when used by themselves and they have that ubercool Descente logo on the back of the hand. Used with an outer layer they're good to about freezing but don't quite have the insulation for temps less than that. Also they bled some dye onto my white handlebar tape so if you're picky about that stuff you may want to be careful. Descente Coldout Gloves get a DSPRS score of 9. I'd definitely buy another pair of these, especially at the Performance sale price of $10 vs. the MSRP of $25.

I was looking for a quick release rear fender just to keep the skunk stripe off my back on rides where the roads are wet. I wasn’t looking to stay as dry as possible and didn’t want a full set of fenders that wrap almost all of the rear wheel and front wheel too, with mud flaps at the bottom, I wanted convenience and simplicity. These fenders came in a set that included a front one that I didn’t really want but it was only $15 for the pair so I just threw the front one away. The front one had some kind of thingy that you were supposed to attach with your brake bolt and then the fender attached to the thingy so it was kind of quick release but you had to leave the thingy on your bike all the time. The rear one has a hard plastic clamp that goes around your seat tube and attaches with a rubber band; it’s a pretty good system but it doesn’t allow for much adjustment in the up and down direction so as you can see, mine is up kind of higher than I’d like… good enough for me, doesn’t protect the guy behind me from my rooster tail though. The rear one also had something to go around your brake bridge but it only works if your brake bridge is circular cross section and mine’s not so I just left it off and used some tie wraps. 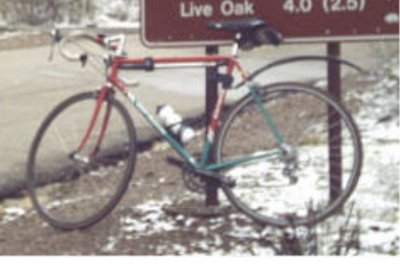 So really this review is only for the rear fender and remember that the intended use is only for a little protection, not full coverage and that’s how I’ll rate it. It’s reasonably stable back there – it doesn’t flop around too much and you do tend to forget it’s there. It looks kinda cool in a motocross kind of way and says “I don’t let a little rain keep me off the bike – I ride in the slop and I like it.” I do wish I’d shopped around a little bit before I bought this one though because I saw another similar one made by Zefal that attached to your seat post (vs seat tube) and had an adjustment gizmo that allowed you to get it down closer to your tire.