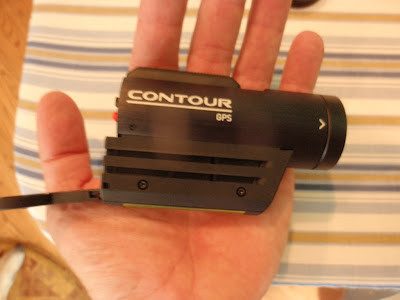 I am a little conflicted writing this review, because Contour doesnt even make this model of camera anymore... but you might find one still for sale (maybe even at a great price) and a lot of the comments here will also apply to the other models, so here we go.


I thought a lot about what kind of sports cam I wanted for my bike. The two obvious options are the GoPro or the Contour. Both seem to have a lot of fans and both seem to take great videos. I like the Contour's looks and mounting options better but I just wasn't ready to buy yet.

I've also been getting interested in Strava, and you need a GPS recording device to take advantage of the coolest Strava functions. But I already have computers on all my bikes so that would be a lot of duplication just for some cool maps.

So then I realized the Contour GPS sports cam would allow me to take videos and upload GPS data to Strava too. After a little more self-convincing, I pulled the trigger.  You can click on My Contour link here or over in my sidebar to see a whole bunch of my clips, but most of the still shots and video you see on my blog since last June were taken with this camera... I hardly ever take my regular camera along for rides anymore.

The GPS function though is pretty bad:
So if Strava data is important to you, you will certainly be disappointed with this as your device.


Overall though, I am not disappointed and I'm having a lot of fun with it.

Contour currently makes two models, the $200 Contour Roam-2, and the $400 Contour+2.  The cheaper one doesn't have replaceable batteries (recharge through the camera) and has an "instant on" switch, so it's for people who want to capture video on demand, a few minutes at a time or shorter rides only.  The expensive one has GPS and replaceable batteries and other bells and whistles so it's for people who want to record everything for the whole time on long rides and then edit later.

The mounts that come with the camera aren't much good for cycling. You need the vented helmet mount and the rubber strap mount. Other possibles are the bike mount (bars or stem) and pole mount (seat stay). 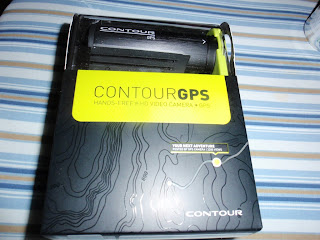 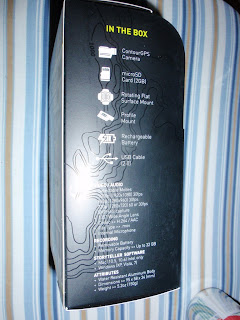 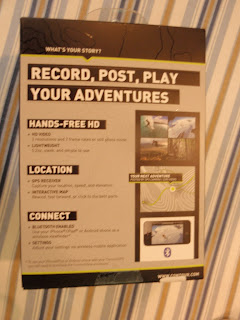 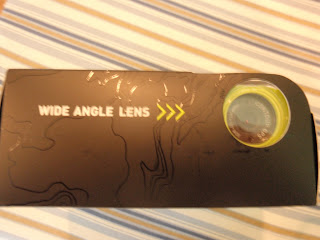 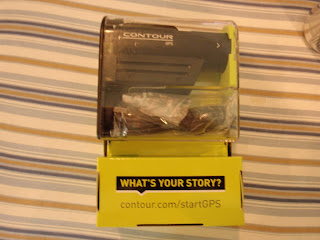 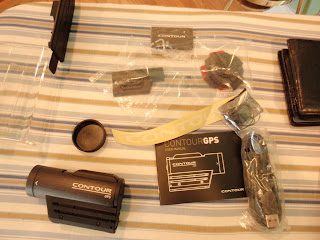 The rubber lens cap doesn't fit very well and you'll lose it within a month.  I store my camera in an old sock to keep the lens from getting scratched.

In addition to the basic package, I bought (or received as gifts)  two flex straps, a pole mount (for the seat stay), a vented helmet mount, four extra batteries with charger (Wasabi from Amazon), and a 32GB Micro SD card.

The bezel in front of the lens has to be turned the proper direction according to the orientation of the camera - if you do a sideways mount you have to rotate the bezel so "up is up".  I painted some extra dots on mine so it'd be extra obvious. 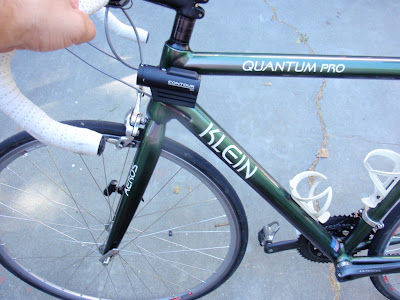 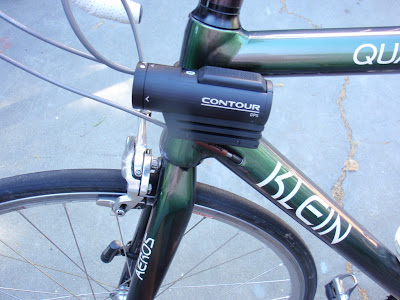 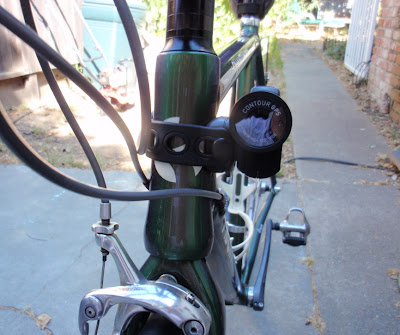 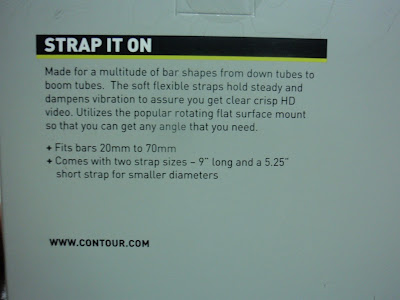 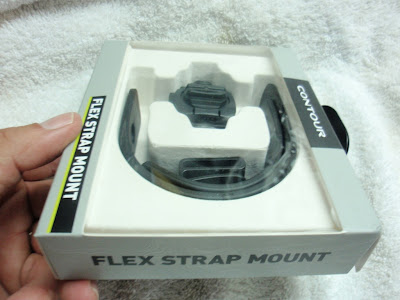 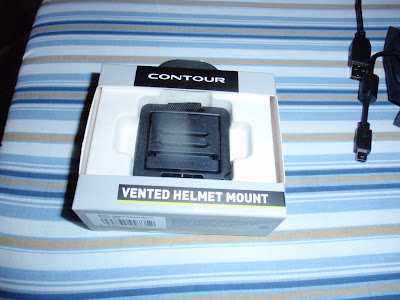 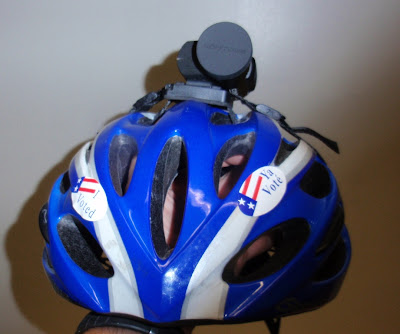 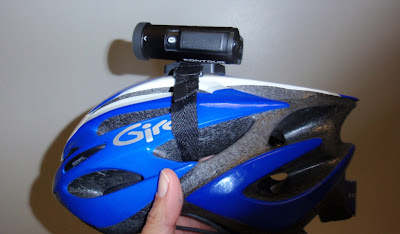 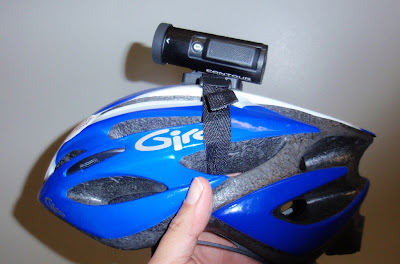 When you get it right though, it's pretty cool.  I can embed the Contour videos onto my blog but you lose the GPS mapping.

Here's the same video on the Contour site with the map included:  LINK


﻿﻿﻿
﻿﻿﻿﻿﻿﻿﻿﻿
﻿The mode switch allows two different recording modes - you might pick highest def for mode 1 and long recording time for mode 2 for example... or video for mode 1 and continuous still photos for mode 2... but you can only program which mode is which while the camera is plugged into your computer... then you can switch between those two modes while you're on your ride.

Here's the link to My Contour Site where you can see lots and lots of little clips I've taken, and you can see some of the highly recommended clips of all kinds of other people too.

The Contour GPS gets a 6 out of 10 on the DiabloScott CycleCam rating scale.  One point off for the slightly buggy software, another point off for having to buy all the extra bits like mounts and decent size SD card, two points off for the unpredictable GPS availability.

Why didn't I get a Go-Pro? Mostly just the looks and the attachment options... and the lack of a GPS recorder.

UPDATE:  Here's a comparison of still photos.
I took photos of the same tree with different methods, and then cropped them to the same size... seems like a valid comparison.

One thing I didn't mention before is that in the full HD 1080p mode, the camera uses a lens angle of 111°, and in all the other modes it uses 135° degrees, so there's a noticeable fish-eye effect in the still photo mode that you should be aware of that isn't too pronounced in the way that I cropped the photos here.  You'll also notice that in some of my videos you get a little more brake lever and shift cable in the frame... that's 720p mode, and the ones with hardly any lever and cable are in 1080p mode... IMO much nicer framing for bike videos... snowboarders and such may prefer the wider angle.

Here are uncropped screengrabs from the Contour Storyteller software so you can see the difference.

Temperature was actually pretty nice.  The fog got thicker and thicker as I climbed... very low visibility at Junction.  BONUS... not many cars going up for a view; some campers coming down though - I can't imagine camping overnight and then wanting to leave early in the morning. 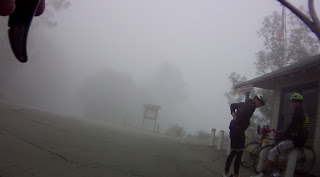 Toe warmers weren't nearly warm enough at the start, but things hotted up with the rising sun.

We did the Hole and came home on the Boulevard.

Just another Groovy day on The Mountain.

Groovy Descent of SGR from Diablo Scott on Vimeo.

Could see some snow on The Mountain this morning, but I couldn't tell if it was near the road.

When I was waiting at the Gate I heard the ranger tell a guy that Summit Road was open only to Juniper because of ice on the road.

We got a lot of rain on Thursday but I was surprised there was still snow and ice... but it was definitely still cold.

At Junction, the rangers said all of Summit Road was closed and wouldn't let anyone go up at all.  Then they said they were going up on a road check and would open it up in a half hour or so if it was safe.

In my search for interesting camera angles, I found this one:


Up Yer Nose Cam from Diablo Scott on Vimeo.

Snot Rocket Like a Pro... not too gross, but don't click if you don't want to watch.

Friend Kevin from work has been riding recreationally for about a year now and decided he was ready for his first Diablo.  But he lives in Pinole and 8 at the Gate was just too early so I told him I'd do my regular 8 o'clock ride with JB, then turn around and meet him at the Gate at 9:30 and I'd ride up again with him.

So the 8am ride was cold but not as bad as New Year's Day... my toe warmers did a good job.

No time to waste at the Junction, turned around to go meet Kevin.  He got a little jumpy though and had started up before I got to the Gate.

He had been a little nervous all week, not sure if he was really up to it, but he did great.  He wasn't always sure about what gear to be in or when to honk and when to spin easy, but physically he had no problem at all.  He totally loved the whole experience too - the view and the outdoorsy naturalness of it all.  He thinks he can probably get a hall pass for one Diablo ride a month.

SMR means Saturday Morning Ride and today's Tuesday... I suspect nobody will complain.

I wasn't the first one to the Summit, but I was probably top 5 judging from how many people I saw coming down.  Left home at 7:00... crack-O-dawn.  I was prepared for really really really cold, but it was only really cold, so the ear jock and neck gator stayed in my pockets until the descent.

Tons of people riding up by 9:30 while I was on my way down. 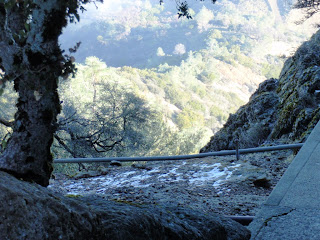 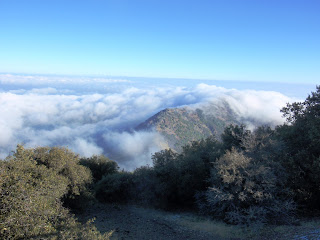 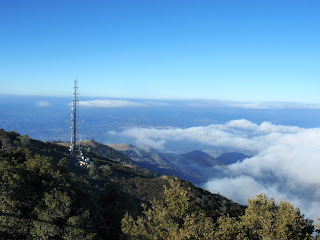 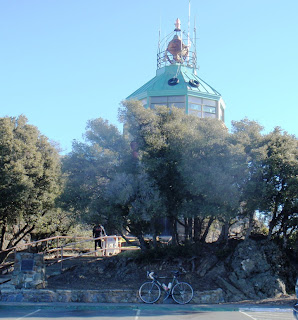