Little windy at the lower elevations.  PG&E had some helicopter operation going on with road blocks and everything.

Wildlife Encounter:  deer at the vineyards.

At the Junction I met Alan - with the Mount Diablo Cyclists advocacy group - they're the folks who got the "don't pass around blind turns" signs up.  He says there's an auto-bike collision on the Mountain every two weeks.  Now he's trying to get no passing zones and double yellow lines at the appropriate spots and he had a petition that I signed.  Pretty much everyone else there signed it too.  Alan seemed to have a very good understanding of how to actually get this done so I am optimistic and may get personally involved as well.

They don't appear to have a web page but there is a Facebook page where people post videos of close calls and stupid drivers, etc.

FacebookLink  Tell them Diablo Scott sent you.
Wind died out above Junction and it was very nice riding. 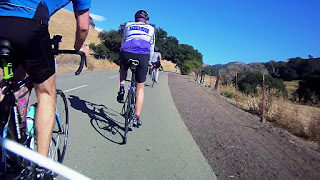 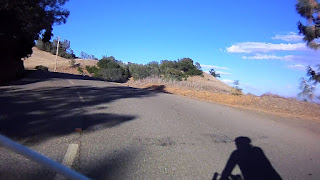 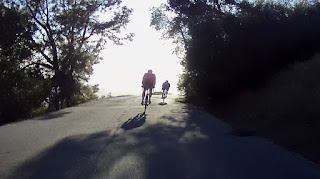 On Diablo it was 70 degrees, on top of that a nice breeze.  Made the riding quite splendid and too quickly ended; I'll take more days just like this one please.

At the Summit I watched a rider do THREE repeats of the Wall - she started up just before me and got to the Upper Lot before I did and then while I was up there I saw her come up a second time and some guy shouted out to her "Once is not enough???" and she responded "Nope, and I'm doing one more"  She looked more like an outdoor fitness junkie than a classic cyclist, but wow.  Then she said riding up three times made her appreciate how easy it is to only do it once. 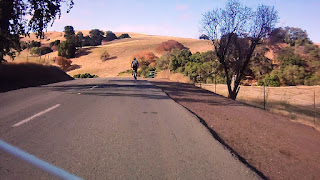 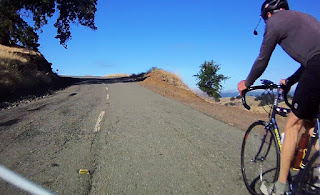 And just for fun, from Wednesday's ride... because this was amazing...

Passed By Metcalf from Diablo Scott on Vimeo.

Three guys from work decided to do the Summit again tonight, and left early - so I did a solo ride to Junction at the normal time. 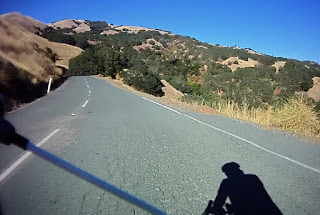 My plan for tonight's ride was to go at a moderately easy pace, and then try to beat Adam's time on the 200m sprint to Junction segment.  I really wanted this and really didn't know how well I'd do, but I didn't think Adam was really making this an objective when he did it so maybe I had a chance... missed it by ONE SECOND... OK well two seconds if I want to make sure I bubble up to the top of the standings.  Not sure when I'll try this again, but I'm pretty sure I have two seconds in me.

Eight at The Gate

Death Ride is today... I lack the requisite awesomeness even to attempt it.

Somewhere on NGR we smelled smoke and got concerned about a fire but the smell went away.

We didn't see Dudley or Sergeant Slow - joked that they must be doing the Death Ride.... turns out they were both on Summit Road.

JB went down SGR for some misguided nostalgic reason, I went up to Summit because I'm Diablo Scott.

Had to be home to meet my contractor by 11 so didn't stay long at the Upper Lot, did a couple laps and went down. 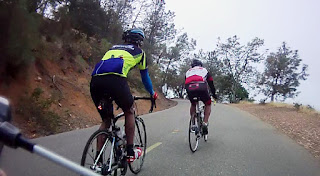 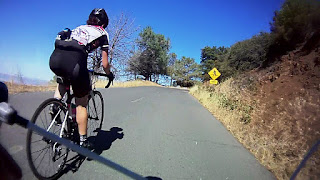 Big group from work today.  We all rode hard from the start. 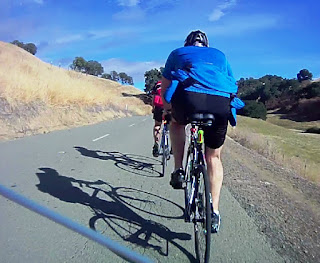 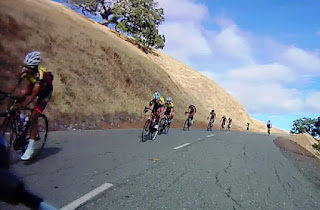 No JB... not sure why but he did have baseball tickets for this afternoon.

I was expecting a lot of cars with picnic folks since it's the Fourth of July, but it was actually pretty quiet.

In the news... this unfortunate event happened last night:

The tree toppled over at the Live Oak Campground around 10:40 p.m. Friday, according to KGO. One camper was taken by ambulance to a hospital and another was airlifted, KGO reported. The extent of the unidentified campers' injuries wasn't confirmed by noon Saturday.

Two campsites remained closed, but the campground is open, said Bruce Erickson, who was working the South Gate kiosk Saturday.


At Juniper I called it quits because my legs felt like bags of sand. 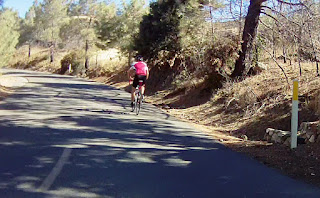 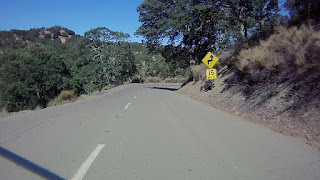 These old Specialized gloves were pretty nice... just the right amount of padding in the right places.  Unfortunately the padding now is all smushed and shifted to the wrong places.  Also... I'm not sure if that's salt or snot across the knuckles there... but I don't think my knuckles perspire that much. 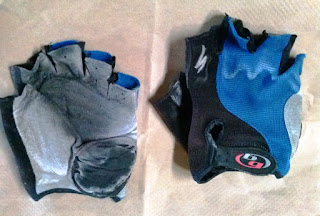 New gloves are Pearl Izumi - with an innovative velcro strap that's kind of in the wrong place but you don't notice after you get them on. Apparently, black is the new blue because the only pair of blue gloves at the shop were for children... literally 95% or more of the gloves were black.  I'll get used to it.  My hands still get numb though.

I was ready for serious hot, but it was only about 90°F.

New guy Hari from work came with us for his virgin Diablo ride... it was a tough ride for him but he made it.

Wildlife Encounter:  deer at The Bump, turkeys at Son of Chainbuster

Saw Ranger Carl at Chainbuster and congratulated him on his recently announced retirement... looks like he bought himself a new bike as a reward. 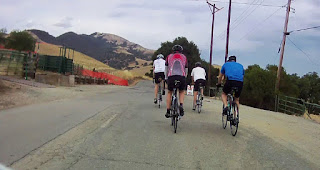