JB called in sick... OK, no hurry then, I had an extra cup of coffee.

Got half way down my street and realized I had my regular glasses on - turned around to get my sun glasses and extra warm gloves.

Got half way down Walnut Ave and punctured - piece of glass I probably picked up on the Dam Road Tuesday. While I was fixing it I thought "Well, that'll probably be my last flat of 2013".

Got a half mile past the North Gate and flatted AGAIN! Jeez, maybe I didn't get all the glass out? Didn't find any more glass and couldn't find the puncture... I think I left the valve unscrewed though so maybe the air just leaked out as the core wiggled around.  I always have two tubes and three CO2 carts in my saddlebag so I was prepared, but now I had no more reserve... I think I'll get a glueless kit to go in there too.

By mile 3 the wind was just ferocious. Bits of dirt and gravel were pummeling me around some of the corners. At least it had warmed up a mite.

Above Junction it got almost bad enough to make me think about turning around at Juniper... I finished my Clif Bar there and it was difficult just to stand still. But I didn't come this far just to quit.

Mercifully, the Summit Wall was kind of calm - I don't know if because it's shielded or the wind was taking a break. The ride back down was a real white-knuckler, but I've done it enough times to know where all the tricky bits are... and no more flats! 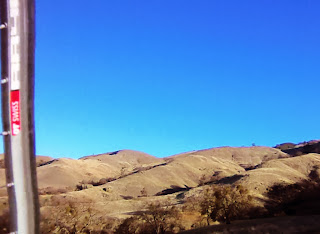 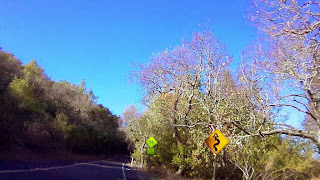 Neither Kevin nor Edgardo had ever done this iconic East Bay ride - so today was it.

We were supposed to be about eight, but only the three of us showed up.  Kevin forgot his helmet and we decided he could do the ride without it. 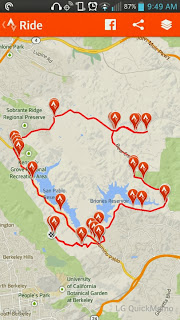 We met at Inspiration Point in Tilden Park.

The Dam Road mostly has a nice wide shoulder, but it was full of broken glass and garbage and road debris; a shame.

The ride up Wildcat is really nice.  It looks harder than it is - so it feels like you're having a great climbing day.  It's a lot like Pinehurst but with a nicer surface and more traffic. 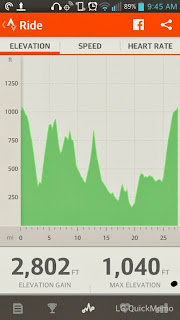 Walnut Avenue is a little like Stonehenge and the solstice sun comes up right over the road (and right in your eyes).

The solstice of course, is not a day - but an instant in time; simultaneous over the entire earth... and it happened at 09:13am PST while JB and I were BS'ing at the Junction.

Didn't see many people on the way up but lots of them were climbing when I was on the way down.

I put my Contour mount on the handlebars - what do you think?  It's a little less room for my hands on the top, but you don't get the cables and brake lever in the video. 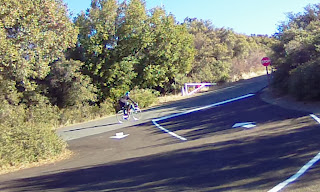 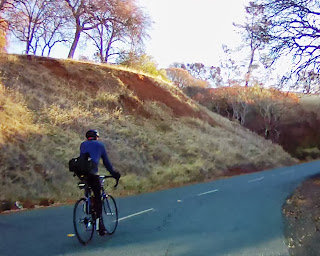 Another cold day... the first half hour I was wishing I brought my toe booties, but after that it was OK.

The sun was right in our eyes for a big portion of the ride today - JB noted that next Saturday is the December Solstice so things'll start getting better after that.

Very quiet on The Mountain today too.  I don't know if it's the cold, the proximity to Christmas, or just laziness but there are a lot of riders not riding. 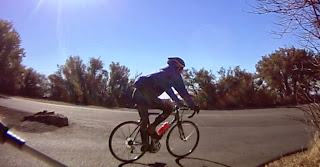 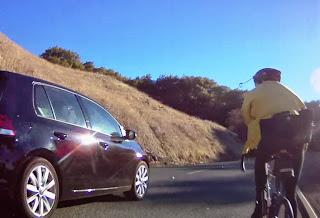 I was ready for the worst today - Thursday was insanely cold, Friday was a little better, but today wasn't really too bad, and it stopped raining sometime last night so I didn't need my raincoat.

Put new brakes on the Merckx last week too, so he was ready to ride.

No wildlife encounters, no roadkill to report, not even a Dudley drive-by... all quiet on the Mountain.

Descending was a bit of an ordeal what with the wind, cold, and slippery surface. 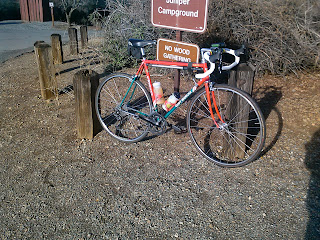 It's a good day for a video:


Closed at Juniper from Diablo Scott on Vimeo.

Tights and windbreaker, light gloves.  Really quiet day on The Mountain - didn't see another rider going up or down until Junction and only one car.

Wildlife Encounter:  deer at the vineyard 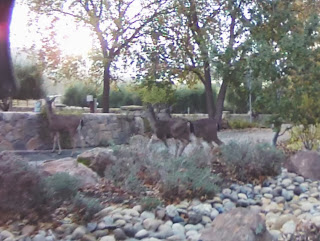 Wildlife Encounter:  coyote above the Zigzag

Lots and lots of people coming up while I was descending - big groups of people... maybe everybody just decided to sleep in today. 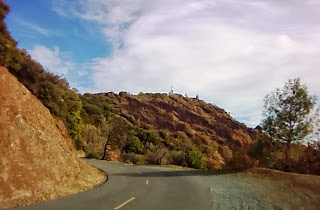 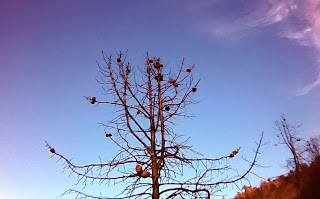 Nice weather today after a very windy week.  I was expecting to see a lot of fallen tree branches but the road was clean. 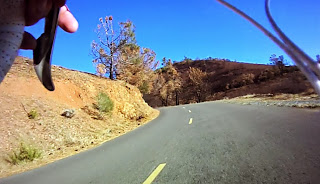 JB started up to the Summit with me but then his knee started hurting so he turned around at Toyon. 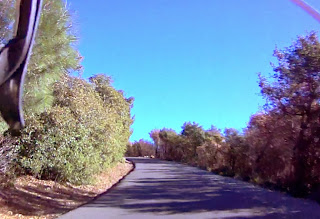 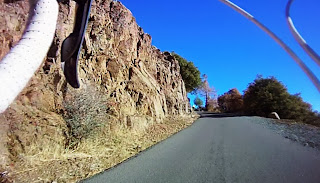 Wildlife Encounter:  Coyote at Diablo Ranch on the descent.

Wildlife Encounter:  Jackrabbit below the Gate on the descent.

Deed of Chivalry:  Saw a little loose dog starting to cross busy Walnut Avenue so I warned the traffic behind me and then stopped to rescue him.  He was a friendly little fellow and came right up to me.  One of the drivers also stopped and we tried to call the number on his tag but it had been disconnected   ;-(    Driver offered to accept responsibility for finding the owner so I continued on home.
Posted by Diablo Scott No comments:

Tire was flat last night so I fixed it then instead of this morning.

Eight at the Gate.

Sun is looking us right in the eye as we go up NGR.