Another garage flat this morning!  Rear tire again, I started to think I had a burr in my rim or something but it looks like just bad luck... pinhole on the tube seem.  I was a little late but JB was waiting. 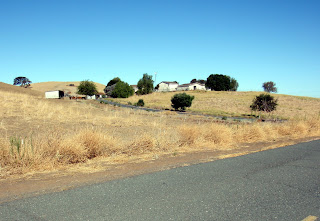 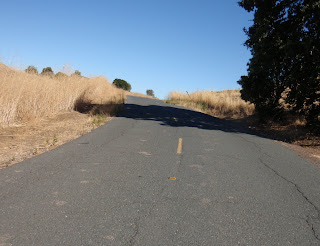 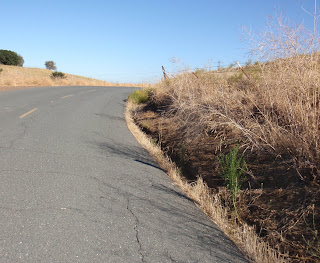 Roadkill Report:  Rat.  A whole mess of crows were breakfasting on this comestible but it was a little too heavy for any of them to carry it away so they had to tear off a bit of flesh between traffic vehicles.

Forgot to bring a jersey to work today so I had to ride in a T-shirt and didn't have a pocket for my camera.

Pretty warm tonight and I didn't go very hard.  Had another appointment with the dermatorturist today and I'm still hurting.

OK, no photos but here's a consolation prize:

Scanned in a couple photos I found in my Big Box O' Junk... enjoy.


Also, did you know that the airport scene in American Graffiti was filmed at the Concord Airport?  Watch this little clip, or just jump to 2m50s to see The Mountain in the background.


Must have been a smoggy day... here's a little help: 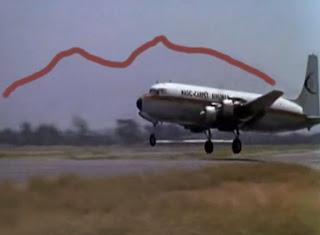 While the rest of the country bakes in hellish heat, the Diablo weather was almost cold enough for arm warmers.
JB and I met at the Gate at Eight.
It cleared up nicely at about 1500 feet elevation.
Talked to a woman at Junction who started riding when she turned 50 and it hurt too much to run, she's loving being a cyclist and recently rode Haleakala... the hard way.
Just finished:  the 2011 Tour d'Organics Video... 4 minutes.
2011 Tour d'Organics, Family Fun Ride from Diablo Scott on Vimeo.

Warm tonight.  Frozen bottle trick worked great.  Got passed by about a dozen people.  One guy caught me but didn't pass so I attacked and held about a one-minute gap the rest of the way... PWN. 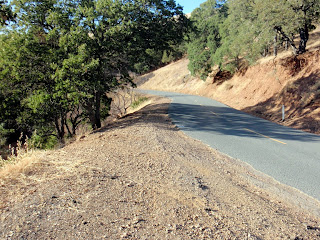 Had a garage flat before leaving home.  Installed a new tube and put the bike in my truck before I went to work.  Looks like my rear tire has the requisite amount of missing tread to merit a replacement. 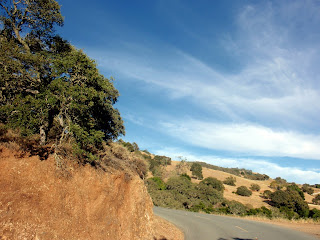 Had a dermatologist appointment in the morning.  He has this procedure for "draining lesions" that reminds me of the torture scene in Braveheart.  He says he can usually cure staph in 2 or 3 weeks, and I'm going on 6 so he considers me a challenge.... gave me some more pills, same stuff as before. 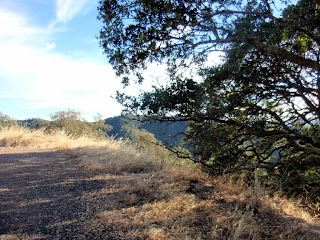 Wildlife Encounter:  Turkey vulture on the descent.  He was on the right side of the road having a snack just around the corner at Moss Landing, so I was going about 40 and spooked him and he tried to fly away, crossing in front of me - had to brake hard and still almost got a face full of buzzard butt.
Posted by Diablo Scott 3 comments:

Diablo Wife has been wanting to do this ride for a couple years now. Talked our neighbor friend and her son into coming along too. We signed up for the 35 mile ride.


Diablo Wife thought we should have matching jerseys. Bought some from last year’s Tour of California… the “most aggressive rider / breakaway from cancer” classification jerseys. Hincapie Sportswear… very nice. Good deal too since they were the 2010 versions. 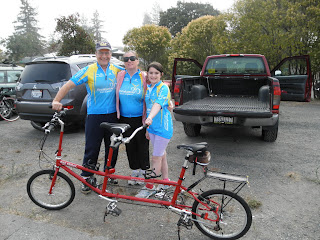 Check in went pretty quick, even with Diablo Neighbor having to “day-of” reg.

The first 10 miles or so went really well, but then it got a little hilly and Diablo Wife started to have some knee problems.

This is not a huge ride as far as number of participants… which is good because these roads are pretty narrow.

The rest stops were kind of quirky; staffed with new agers and old hippies, but that’s part of the appeal of this event.

There was one 16% downhill for a couple blocks in Forestville. I gave everyone a safety lecture and we all made it down just fine, but THEN… (dunt dunt duhn), we regrouped at the bottom under some shady trees and heard this odd high-pitched whining noise and couldn’t figure out what it was. Well a ways down the road I figured out that it was the Schrader valve on the rear tire of the tandem… it got so hot that it started to leak by. I couldn’t get it to stop so we found another shady spot and I swapped the tube. But THEN… (dunt dunt duhn), the spare was bad (spit seam), and I used up my only CO2 cart trying to fill a failed tube. So I put the original tube back in and used Diablo Wife’s mini pump and got enough air in there to get us to the next rest stop. They didn’t have a 20” tube, but they had a good floor pump and they gave me a glueless patch kit for the road.

The rest of the ride went OK, but the less experienced riders in my little group started to fade so it took a while before we finished up.

The post-ride meal was kind of a disappointment. I’ve enjoyed many a vegan dinner so no qualms there, and I’m not really picky about food anyway, but this was pretty bland and uninteresting.

All in all, it was a fun and memorable day. I’m going to say though that the 35 mile route is probably too difficult for most folks who are looking for a family fun ride. Also kind of expensive at $65 for the 35 miler, but kids are free. The full century was $110.

Bonus: Got stuck in unbelievable gridlock on the way home. Took (no kidding) an HOUR to go two miles on the part of Hwy 37 from Lakeville Highway to Sear’s Point. That capped off what was already a really long day.

Met JB at 8 at the Gate.
Hardly saw any other riders until the Upper Ranch and then there were about a dozen, not together, just all bunched up... funny how that works.
I'm feeling pretty good, but not very strong.  And my heart rate is too high for my output but it's good to be back on the Mountain. 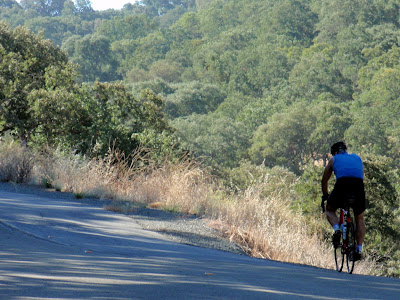 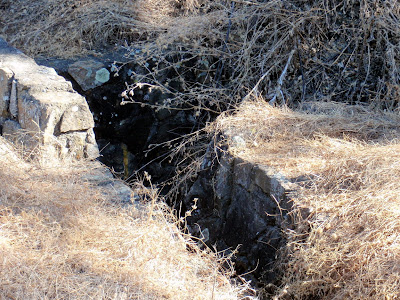 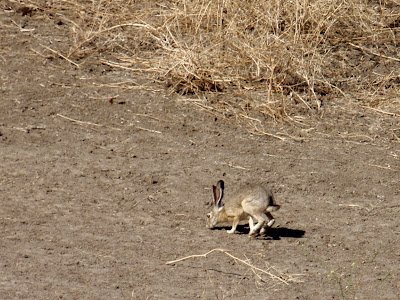 Saw Morgan at the Junction and told her I'm planning to do Cruella this year if I'm feeling better.  Rider limit is 300 and they only have about a third of that signed up so far so she was kind of marketing the event (as a DMS club member). 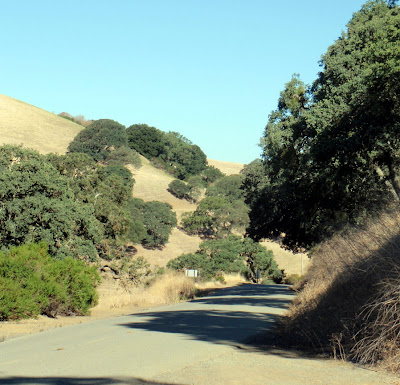 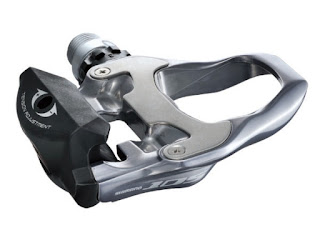 OK, two rides on these now, and I'm impressed.  I've had Look Deltas pretty much since clipless pedals were invented, and other than SPDs for my MTB/winter/touring bikes they are ALL I've ever had.  I liked Looks because they were easy to get into and have a big platform, but they always squeaked and it was really annoying.  I did some checking and didn't find anyone who didn't like these Shimano pedals, nor anyone who would say they squeak so they sounded like the ones for me.  Not too expensive, about the same as the entry level Look Keos; the Ultegra and Dura Ace versions didn't seem to offer any advantages over these either.  Easy to get into - maybe 5% harder than my old ones but that's probably just me and 23 years of Look cleats.  I'm not sure why they have the little replaceable plate on the top... probably to prevent wear on the softer pedal body but seems like an easy thing to replace if necessary whenever.  They came with one version of cleats that have what appears to be the perfect amount of float.  Other versions with different amounts of float and different colored doodads on the bottom are available as replacements.  These pedals get a 9.5 on the 10 point Diablo Scott Pedal Rating Scale.  Only way they could be better would be if they came in colors to match your bike (of course if you have a black or silver bike they already do.)

Quite a bit warmer, dryer, and browner than on my most recent ride last month. 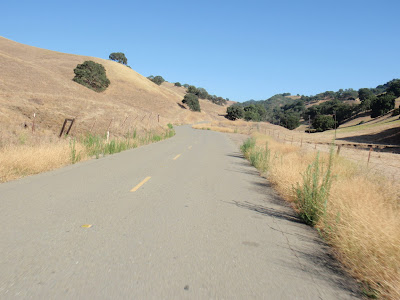 Felt OK but didn't push it... heart rate was high from 1) loss of conditioning, 2) heat, 3) excitement about new pedals.  Only got passed by three guys... 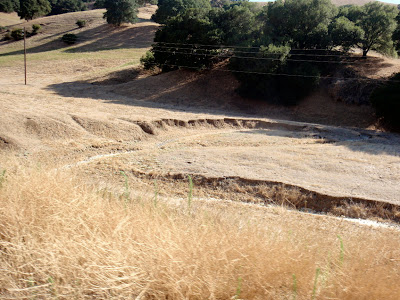 I think there were only four of us up there though.  JB came up later and said he had a flat with a bad spare at Moss Landing.

Wildlife Encounter:  deer at the Bump. 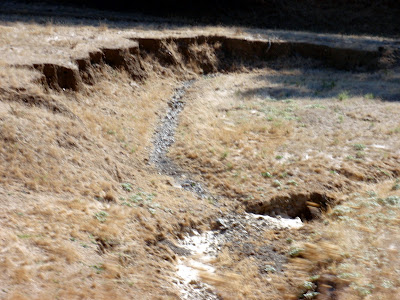 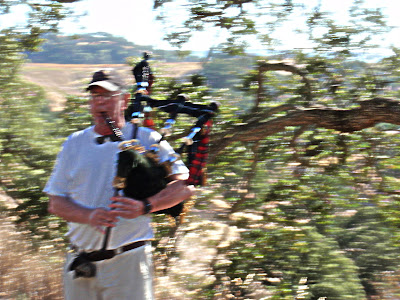 Thanks for all the nice messages and comments.  Sorry I couldn't find any roadkill to report.

OK, update on my little health issue.  This is a stock web photo, not me, but it shows pretty much what my staph infection looks like - I've got this all over my chest and under arms.  Mostly it's just ugly and gross but some spots are pretty sensitive and some are a little painful.  Stuff is just damn hard to kill but I seem to be winning very slowly.