Update - getting around a lot better but there are still a lot of things I can barely do - like pick things up off the floor, take a deep breath, and go #2.

Prescription pills ran out today, so now I'm down to plain old ibuprofen.

Sleeping OK, so that's nice; but it takes a long time and a mental diversion to stand up.

My posture is suffering from favoring the injured side so my back is getting kind of sore, but when I try to walk straight my ribs complain.

Typing is also very draining... time for a nap.

Oh.... the really great news... I haven't sneezed ONCE in the last week.
Posted by Diablo Scott 2 comments:

I dismissed Diablo Wife's pleading to go to the ER Saturday night... figured I could get through the night and re-evaluate in the morning.

Sunday morning I couldn't move at all; pain was a lot worse.

Diablo Scott's angel of a spouse called the EMTs for me at 7:30am with a minimal number of "I told you so's".

Diablo neighbors expressed curiosity disguised as concern while they watched the paramedics load a miserable, mangled, middle-aged meat-sack into the ambulance.

Spent 9 hours in the ER at JMMH getting scanned and drugged and examined.  There were also a lot of questions about insurance, travelling to west Africa, and rating my pain level on 0-10 scale.

Dr. Leonard was my main case manager and he was great - went to UCDavis medical school and rode the Davis Double (!)... great bedside manager and smart as a whip.  His most memorable diagnostic remark:  "Well, you're obviously in misery..."  I don't know why, but that kind of confirmation from an authority seemed important to me.

They were kind of on the fence about admitting me... went over the pros and cons, but we decided together that if I could get off the bed and walk around a little bit that I could go home.  At 4:30 pm I did it... but just barely.  First time I'd been vertical in about 20 hours.

Next person who makes a crack about finding another sport to participate in... will be just one more guy who just doesn't get it.
Posted by Diablo Scott 2 comments:

I was really looking forward to this ride.  First century since my pelvis fracture in March, felt good, great weather, Rick was riding with me.  But I crashed at half way, just past lunch - here's the short version:
It was just stupid - I don't know if the wind blew me over or it was a moment of inattention or what, but I drifted off the road into the soft dirt, front wheel sunk in and I hit the deck pretty hard.  Lots of pain but doesn't seem serious enough for doctors to get involved.  I managed to get back on the bike and return to the lunch stop where I got some bandaging and caught Sag Vehicle #16 back to Davis.

One glitch was that they gave me the wrong route slip at check-in... I didn't even look at it because they mark the streets so well... but I thought since they gave me the green slip and green wrist band that we were following the green course.  Turns out the green was for 100km and I started off the wrong direction at the split but then Rick and I figured out what the deal was - he had the yellow band.

This is going to hurt for quite a while.

Apparently my music selection for this video is a problem... come back later if you can't click right now.

Flip from Diablo Scott on Vimeo.

Always a beautiful day on The Mountain.  Today's version was quite a bit warmer than typical for early October and there was lots of great suffering.

This is a long video - the first few minutes are the stills that I took... if you want the hi-res version of one of the photos just e-mail me with the time stamp.  The rest of it is real time video at the bottom of The Wall. In total, about one beer's worth of enjoyable stimulation for your cycling neurons.

edit:  somehow I clipped out the first two finishers in the video part - so starting at 3m14s you'll see the third place guy and I said he was #1.  So add two to each of the placings in the subtitles.  For just the unedited footage, see my YouTube version HERE

Nice and cool at the start but it warmed up fast - there's even a heat warning out for today.  Also the sun was shining right in our faces for lots of the way up making it hard to see the road ahead. 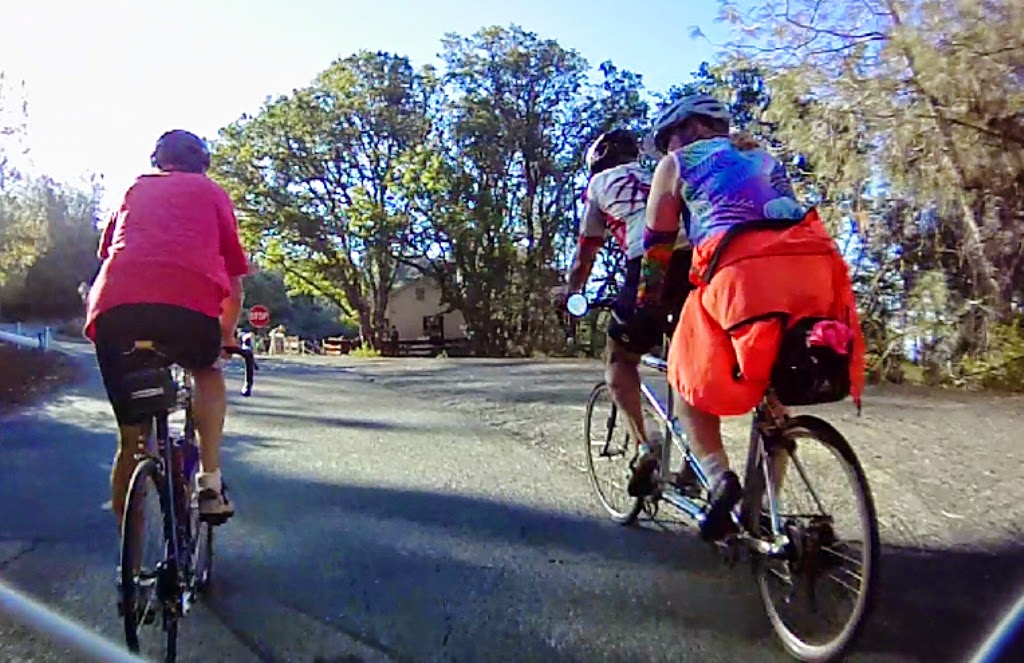 Hardly any riders on NGR - figured it was because people will be doing The Challenge tomorrow. BTW, I'll be a backpack driver again, so look for me and we'll do a selfie.  Then at Junction there was a big bunch of people... maybe because of The Challenge tomorrow... could be the reason there were so few people and so many people. 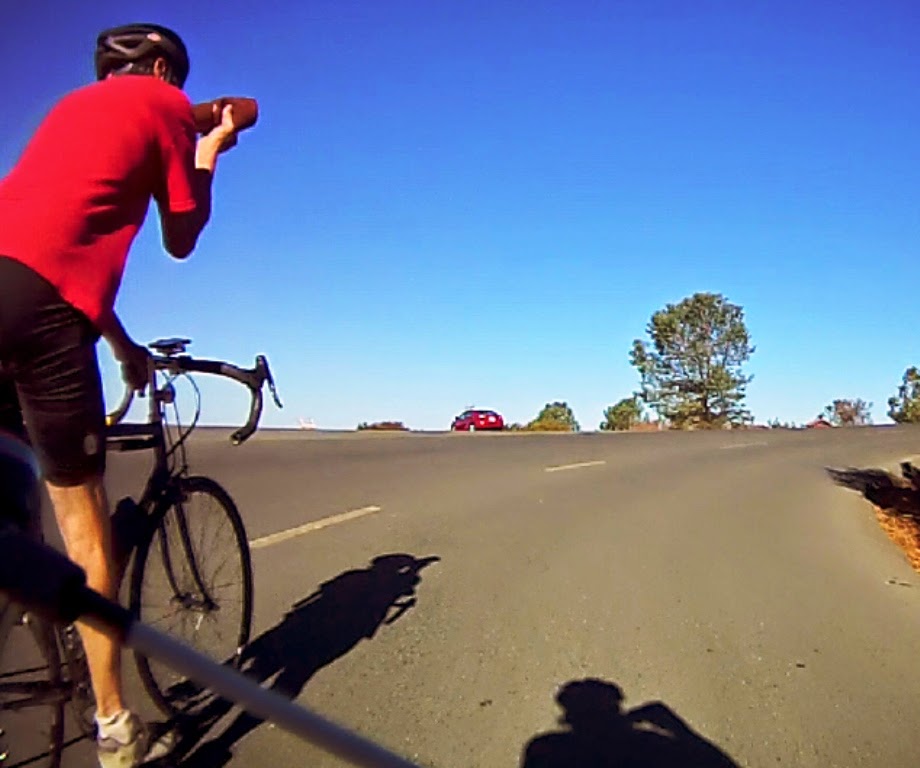 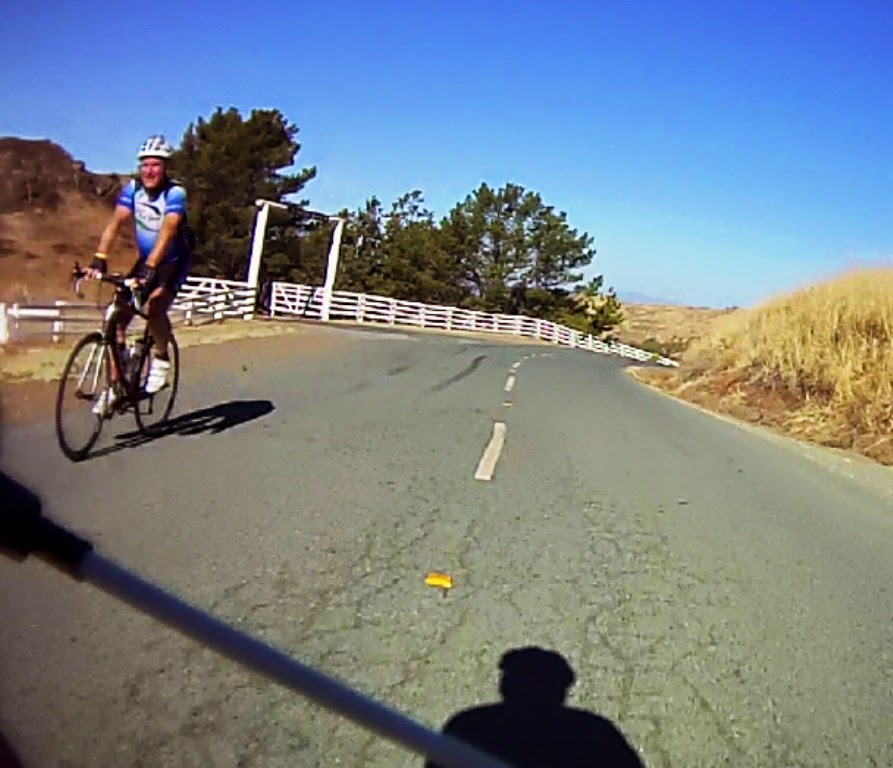 Last Wednesday Night Ride of the year.  No photos or video.

The MTB crew met us at Rocco's for pizza afterwards. 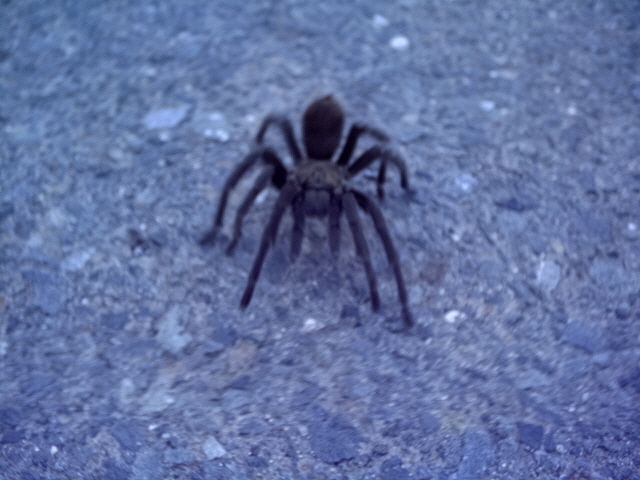