Four Summit Saturdays in a row!

JB was on-board for a Summit ride yesterday so we planned on 3500 feet of slow and steady climbing and arriving at the Wall with something left in the legs.

Blog Reader Mike posted a photo of himself in a Grateful Dead jersey last week, so I obviously assumed this was he - but astoundingly it was not, and there are two such jerseys on the Mountain. 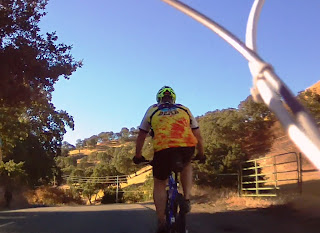 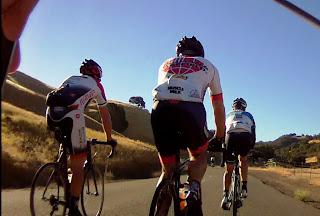 On the Bump, we happened upon Diablo Regular Ernie - he has a unique climbing style incorporating low cadence in a big gear out of the saddle.  He said he has high blood pressure and spinning makes his heart rate too high. 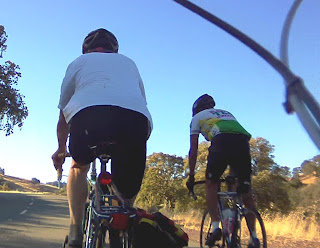 We also discussed various wildlife and what it would be like to collide with them.  We agreed that bucks and bulls would be the worst, but turkeys would be more likely. 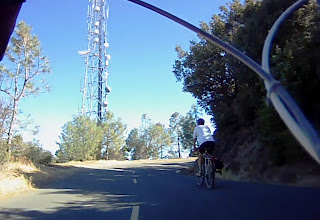 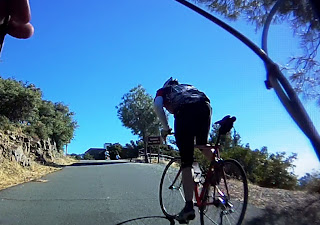 From the Summit we looked for smoke from the Yosemite rim fire - it was sure hazy over in that direction, but nothing we could point to and say "that's it". 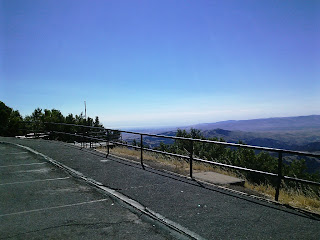 Someone pointed out to me last week that there was a sequence of dots painted on the Wall, and he thought they may have been some kind of indicator for the cyclists.  Hard to believe that since 1) I hadn't noticed them, and 2) there's no indication of what they indicate.  They do seem to be kind of evenly spaced, and maybe they'll help you gauge your climb... anyway, here they are:


The Facebook page of the Amgen Tour of California asked if the fans thought Leopold Konig's win on the Summit of Mount Diablo helped prepare him for his summit finish win in the Vuelta this week... so I posted this video to show what it looks like to weekend warriors.

Not König from Diablo Scott on Vimeo.

Me, JB, Seppi, and Charlie.

JB still hasn't fixed his Della Santa.  Seppi's getting married next weekend... this was his last ride as a single man.

Beautiful night and the sun is getting really low.


JB gapped me after the Bump and I just wasn't feeling like a big effort to chase him down... but when I started smelling the finish line I decided I wanted it.

Nice to see that the Contour web site still allows video hosting even though they're out of business... wonder who's in charge of that?
Posted by Diablo Scott No comments:

Three summit Saturdays in a row!
JB didn't show so I put the rock on the post and went.
Roadkill Report:  snake.
Way cooler and windier than late August should be, but I'm not complaining.
Didn't waste any time at Junction, just finished one bottle and started up Summit Road.
I've been trying to memorize the names of the picnic areas and things on Summit Road - here's what I remember I think - starting from Junction:
1.  Canyon Nook Picnic Area on the left
2.  Sunset Picnic Area (lower entrance) on the right
3.  Summit Trail / Hotel Road on the left
4.  Sunset Picnic Area (upper entrance) on the right
5.  Livermore Overlook on the right
6.  Rocky Point picnic area
7.  Toyon
8.  The Pines
9.  Blue Oak
10. Oak something
11. Grapevine (anti-gravity)
12. Juniper
13. Muir
14. Water tank
15. Some trail head
16. Devil's Elbow

Saw one old guy on a classic Masi with a criterium cassette doing hill repeats... chapeau. 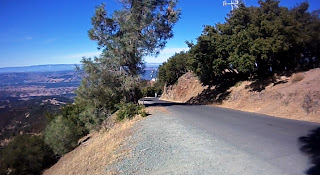 I finally decided to trim my helmet straps.  Should've done it a long time ago.

Me and Ed and Ted tonight.  Not a lot of riders on The Mountain... should be more people training for The Challenge.  Fire danger is high due to weather and recent heat lightning, but not high enough to close the Park.  I'm thinking there's about six more Wednesday Night Rides this year before Daylight Wasting Time begins.

Wildlife Encounter:  Flock of turkeys  -  I looked it up, it's only a "rafter" of turkeys if they're the domesticated kind of turkeys... "flock" is the proper collective noun for the vicious Jurassic beasts on Diablo. 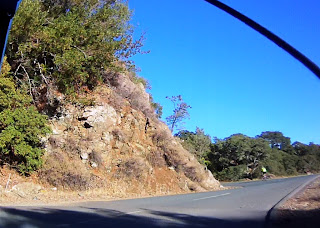 Didn't feel great this morning, but got better as the elevation got higher.

JB had been on jury duty through last night so we discussed issues with the legal system.

At the Junction, these two guys showed up with some cool looking custom bikes.  We'd never heard of them before so I Googled the brand - here you go:  Zanconato.  One of them had a power meter crank too.

I almost always stop at the Lower Parking Lot before I go up the Summit Wall.  This gives me an opportunity to get some recovery, slam down a HammerGel, and watch for cars coming up from below.  From here you can see down to Devil's Elbow and plan your start so that no cars will come up behind you on the Wall...  see video below.


Dancing up The Wall from Diablo Scott on Vimeo.

Charlie brought his bag of dirt from Alpe d'Huez so we could have a little ceremony today and we can ALL say we've ridden our bikes on the second most famous mountain in the bicycle world.

Wildlife Encounter: Turkeys. Also, there was a really big swarm of buzzards over the loading dock area.

On the way to the Gate as usual, running a little bit late, I got about a half mile from home and saw my reflection in a car window and noticed that I didn't have my helmet on.  So after returning to fetch it, I was now running quite a bit late.  Got to the Gate at about 8:05 and no rock and no JB so I waited around for about five minutes and then put my own rock on the post.  I was surprised to catch up to JB somewhere and he said he just forgot but he's been pretty sick with a respiratory thing so he wasn't moving too fast.  Also he's replacing some BB parts on his Della Santa so he was riding his Atlantis - not that he'd ever use that as an excuse for being slow, but of course it is. 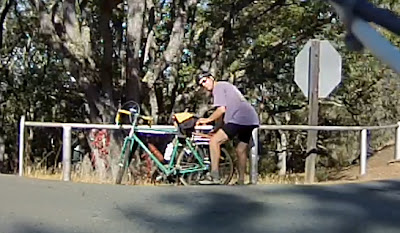 He was done and then I went up to Summit.

Had some troubles with my Contour video camera... interesting that they went out of business this week: 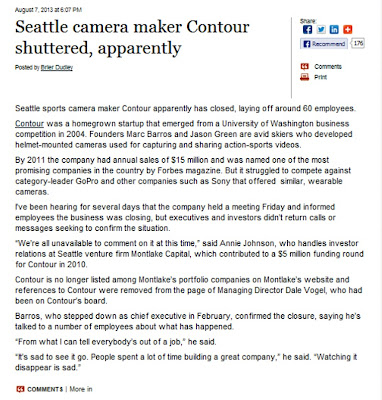 Came up to this guy near Surface of Mars:  he said he was the official photographer for the Diablo Challenge and was getting his setup worked out.  Watch for him (and practice your pose) about 1.25 miles above Junction.  BTW, I'll be volunteering again, so come say hi at the start or finish. 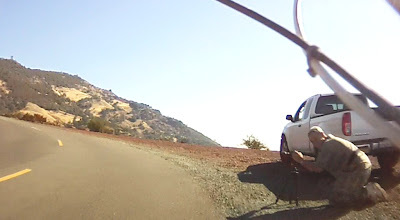 Dumbassery on the Mountain is of course, not limited to drivers of motor vehicles - refer to below video:

Dumbass from Diablo Scott on Vimeo.

Kevin and Evan, Charlie and Seppi, and yours truly tonight.

Charlie talked about riding Alpe d'Huez (it's hard), the Tour (it's exciting and crowded), and buying Alpe d'Huez jerseys on top of the mountain (they have real bike shops up there in a ski village).  He bought the first one he saw, but then liked the second one better (all the hairpins on a map) so he bought that one as well; he says he'll wear one of them next week.  He also brought a bag of Alpe d'Huez dirt to sprinkle on Diablo somewhere so it'll be kind of like we're all riding the Alpe too. 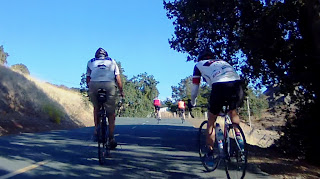 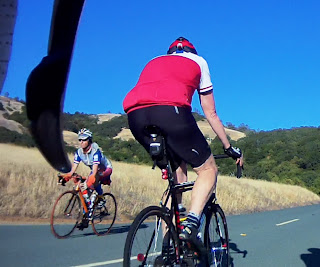 Diablo shoutout to Pumpkin Jay descending on the orange bike, who just returned from a Flandrian Pilgrimmage to all the places I'd go if I could too.  No word on any Flemish dirt to sprinkle.
Posted by Diablo Scott No comments:

JB was sick and I hadn't signed up for the Marin Century, so I did a late and lazy ride to Muir Picnic Area.