(I was really sick Friday and not well enough yesterday to ride the Mountain, I'm REALLY glad I was pretty much over it by last night)

CJ and I took the BART to the City and got there about 12:45. We scored some schwagg including Jelly Belly Sport Beans, water bottles, a bike bell, and way too many Toyota thunder sticks. I also talked to the guy who's co-authoring Saul Raisin's upcoming book and he was selling Raisin Hell stuff so I got some socks and CJ got a wrist band. 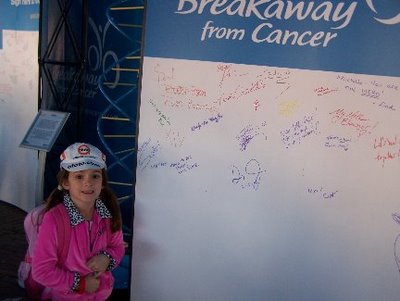 The Amgen booth had a board to sign, then they asked for donations but we grabbed a bike bell and ran. 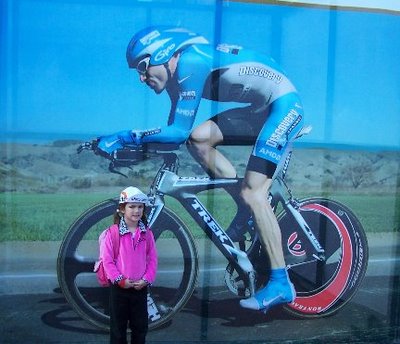 The decorations layout of the expo and start areas were really professional and grand. This is not your average industrial park crit. (I think they airbrushed George's varicose veins out of this poster) 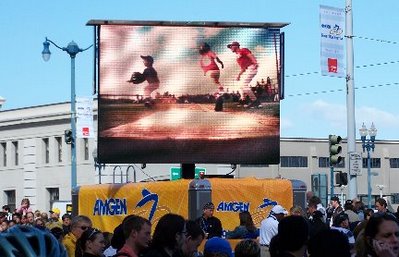 Too bad these TVs weren't spread out over more of the course... they had commercials on them in between riders.
The crowd at the start area was enormous, and the expo was packed, so we walked down the course a ways. Both sides of the street were full of people until we got about 300 meters past the start box. After that you could find a place on the curb to sit down and take some photos. Adam spotted us early on - he was with his wife and some friends and he brought his Italian World's jersey hoping to get some autographs. Then Rick and his son found us so we set up camp there for a while and made noise and waved our flags for each rider. I realized here that the start list put out by CyclingNews.com was completely wrong regarding rider jersey numbers so it was essentially worthless except for the team rosters. 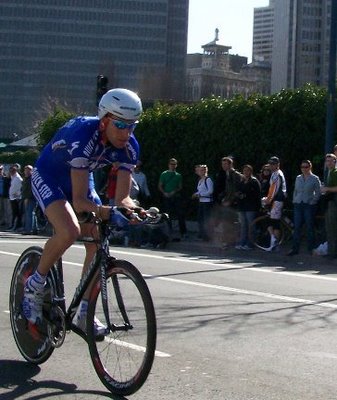 Plenty of places along the route to get close to the action if you didn't need to be at the strategic spots.

It was actually getting too warm in the direct sun so after a bit we walked farther up the course and found a shady spot that also had a grassy bit for the kids to play on. There was a volunteer course marshall there who was very adamant that no one put their feet in the gutter - they had to be up on the curb. But he had the official list with the real numbers and start order so we put up with him.

All the big names got the biggest cheers so the crowd really seemed to be knowledgeable. Cancellara in the rainbow jersey for TTs, Bettini without his, Hincapie, Zabriskie, and especially Leipheimer drew lots of extra excitement. 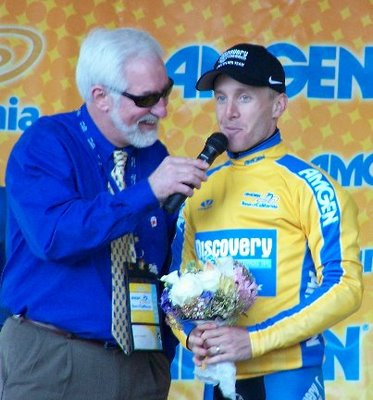 This guy got a huge cheer when he said "We should do this every year, with Levi winning the Prologue in San Francisco."

UPDATE: Despite multiple shameless iterations, Rick and I failed in our attempts to get ourselves on the TV coverage.

It was raining so hard that visibility and safety were a concern - so I slept in. Here's a photo of me though (red jersey, black helmet) from a collegiate race in 1988! 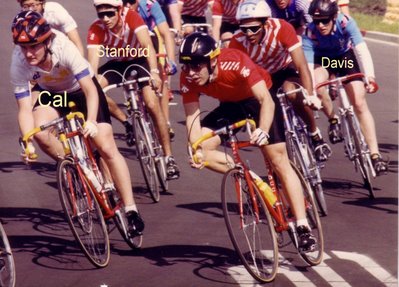 Oakley resident Arthur Mijares, the guy who filed to have Mount Diablo's name changed to something less demonic, is appealing to the White House the USGS decision to retain the existing name. He is asking the executive branch of the federal government to investigate his claim that the USGS didn't handle his request properly. They actually got bombarded with public response opposing the name change. Mr. Mijares apparently objects to being referred to as a nut job, so I won't do that. This report is from September 2006, but it didn't get much coverage.

The only hate mail I've ever gotten as a result of a blog post, was from one of Mr. Mijares's supporters - it was an annonymous entry in my Guest Book (I've since deleted my Guest Book because it filled up with spam).

It's been getting warmer so I was over confident, but there was frost on the windshields and the tootsies were complaining most of the ride. Wound up having to wait at a lot of red lights on the way out so I was a few minutes late at the Gate and JB was waiting.

Saw two riders coming down and a couple cars going up but it was a pretty quiet morning on the Mountain. In a couple places it looked like some new green vegetation was growing but maybe I was fooling myself; we're well below normal on the rainfall this season.

I did an interval training spin class last night so my legs were a little heavy but I put in a hard effort the last mile and it felt good.

Then at the Junction I met blog reader Keith who had the VeloNews honorable mention photo that I reposted in my December 9, 2006 blog entry. He introduced himself and I noted that I'd seen him up there before - he says he mostly rides on Sundays though.

Then another guy came up from the North in SHORTS AND A SHORT SLEEVE JERSEY!!! I just looked at him and said "BRRRR". He said, "Well, I just rode up the hill and I sweat a lot". Sure enough, he was sweaty. I said "We all just rode up the hill buddy. And it's the descent that you'll be regretting." He didn't seem to think there was anything to worry about and started back down... bare legs, bare arms, I'm not even sure he had gloves. 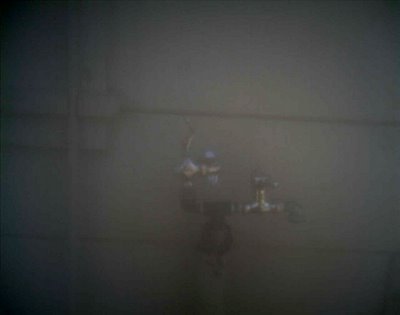 Sorry but my camera lens got all sweaty. 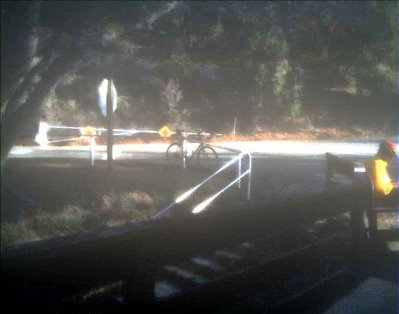 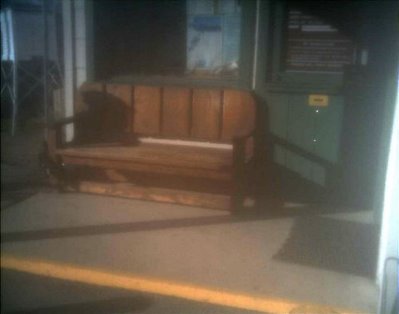 JB and I went down South Gate and through the Hole. Quite a few riders were coming up now and it wasn't nearly as cold.

Two weeks until the Tour of California!