On Thanksgiving morning, I was a cycling lead out for the Walnut Creek Turkey Trot - a 5km/10km fun run through down town.

Cold start.  There was even a little snow on The Mountain Friday morning.  Full winter jacket and gloves.

Flatted on the way to the Gate - near that Korean church... called JB and told him not to wait.

Only saw about three other riders on the way up. 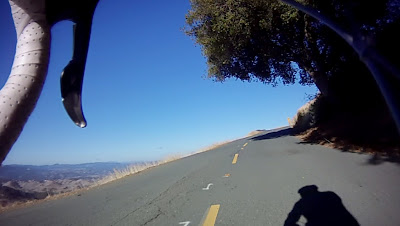 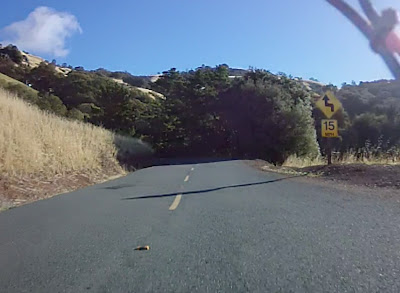 At Junction, JB's old orthopedic surgeon was there; he remembered JB's clavicle crack and knew the exact place.  He had been a more serious cyclist at one point but was having neck problems so he bought a custom Calfee bamboo bike that allowed him to ride more upright... pretty cool looking geezer dream bike. 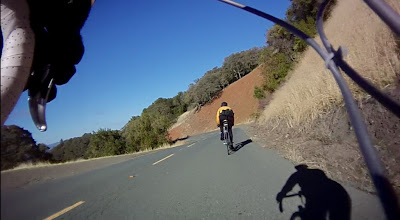 Much warmer by the time we went down.
Posted by Diablo Scott No comments:

Hard time getting started this morning.

I decided it was a recovery ride when I realized how slow I was going. 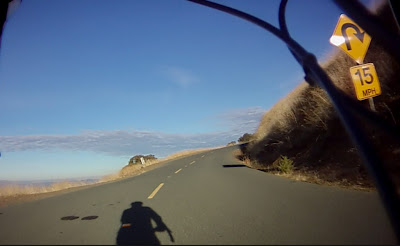 Sympathies to anyone who knew Craig Elstins... and please pass turkeys real wide.

Craig Elstins, the 51-year-old Benicia bicyclist who was critically hurt while riding with friends in Martinez Oct. 20, has died in Walnut Creek from his injuries, a family friend said Monday.
Elstins, who was thrown from his Venge bicycle when he encountered a group of turkeys while riding west on Alhambra Valley Road, died about 10:30 a.m. Sunday.
He and about a half-dozen friends often met up for extended Saturday morning rides in the Bay Area.
That morning, they had crossed the Benicia-Martinez Bridge and were traveling along the popularly called “Pig Farm” route, named for the site of a former hog farm that cyclists pass along the way.
As they traveled single file along a steep decline, one cyclist passed the flock, or rafter, of turkeys without incident.
Elstins was following the preceding rider, but just as he was about to pass them the turkeys ran in front of his bicycle, and Elstins fell. Witnesses said the turkeys appeared to escape unhurt.
Posted by Diablo Scott 2 comments: