Weather report was for a big storm to come in today - looked like we were going to beat the front though... I packed my rain cape just in case. Started to drizzle on me on Bancroft Road.

I put a new chain on Eddy just before I left - I have this new technique of sizing the chain correctly with less mess by hanging the old chain and new chain next to each other from nails and then trimming to size. Much better than my old technique of laying them flat on newspapers. Hardly any old chain gook got on my hands.
Just me and Rick at the Gate. We took it kind of easy.
Wildlife Encounter: Some coyotes howling around Burma Trail somewhere unseen. 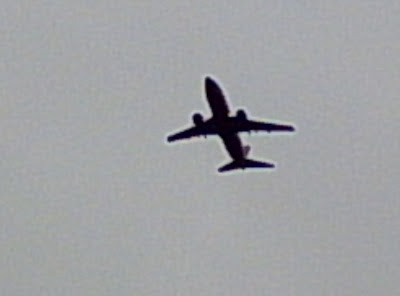 Lots of low-flying planes today, to stay under the cloud cover.

At Junction, we decided to continue on up Summit Road to Juniper. I had taken off my rain cape. It started hailing on us. It got windier. 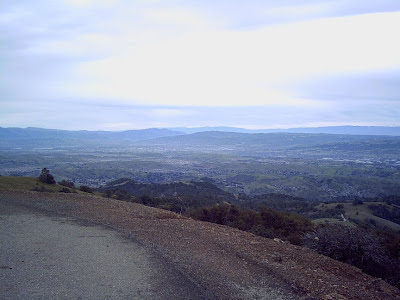 Wildlife Encounter: A bunny about where the new pavement starts.

Rick had this idea of standing climbing the length of the Blue Oak Speedway; I decided I'd try it too... made it about half way before I sat down for easier spinning. 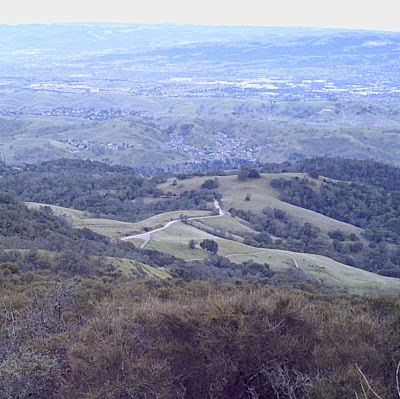 At Juniper, Rick's ski gloves fell out of his jacket and he didn't notice. We later found them in the brush down below the parking lot - the wind had blown them quite a ways. 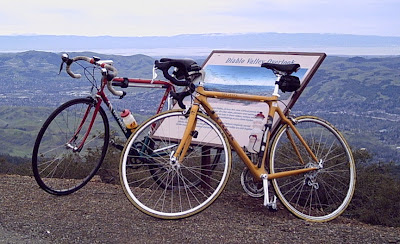 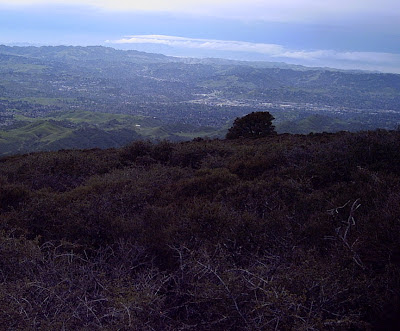 It was a dicey trip down too with all that wind... I'm pretty sure my knuckles were white underneath my two layers of full-fingered gloves.
Posted by Diablo Scott No comments:

This is just a sequence of photos, not video.

First time I've tried to embed a slideshow... let me know if it doesn't work for you.

If you double click on the viewer, it takes you out of my blog to my Picasa page.
Posted by Diablo Scott No comments:

Rick and I were on hand for the action today - he brought his son and I brought my daughter and they're about the same age and they're both experienced bike race spectators... my daughter was at all five SF Grand Prixs and has been at all three Tours of California with me. 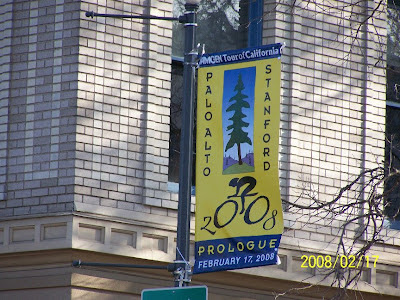 We started, appropriately enough, near the start. We walked around some of the team RV's and then made our way to the main drag. I should have gotten a photo of Michael Ball's Rolls Royce. 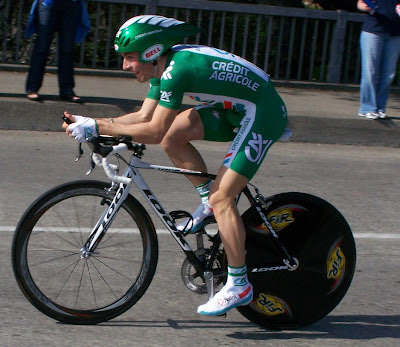 Some of the early guys didn't have full-on time trial bikes. 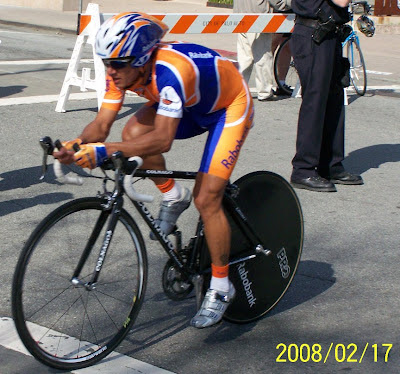 There were no crowd barriers in the beginning of the parcourse. 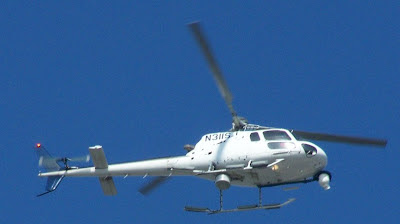 You know it's a big race when the helicopters show up. 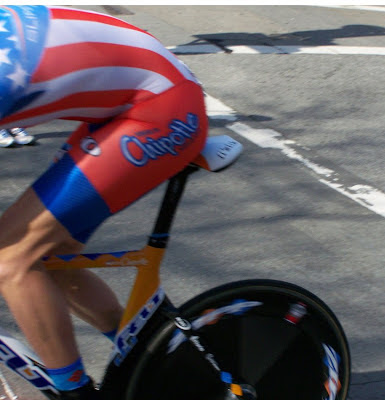 My shutter finger was too slow to capture some of the faster guys. My daughter thought it was hilarious that I got so many photos of butts. This one obviously belongs to Dave Z. 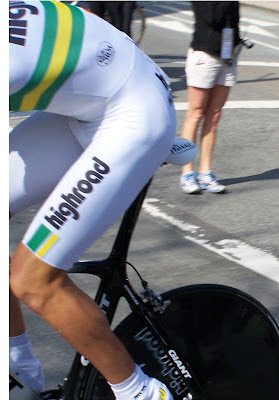 The parcourse went under El Camino Real - it was loud in there! 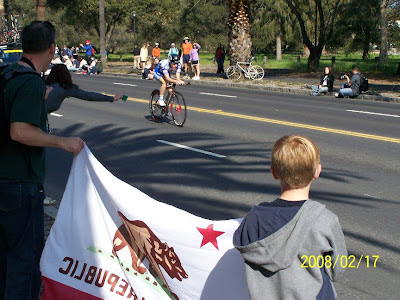 Rick and son cheer on a Quickstep rider just inside Stanford's campus. 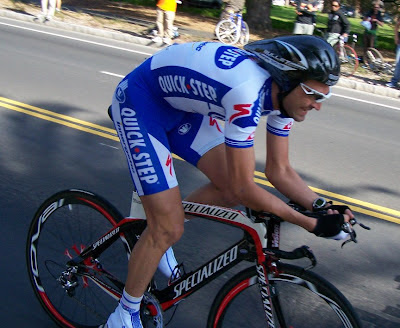 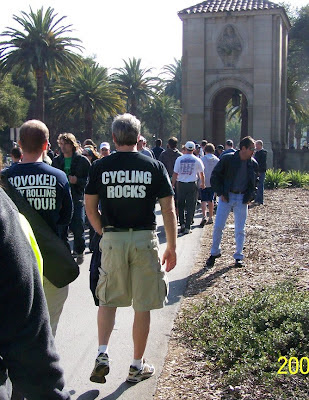 Most everybody made their way up to the finish area by the time the big names got started. 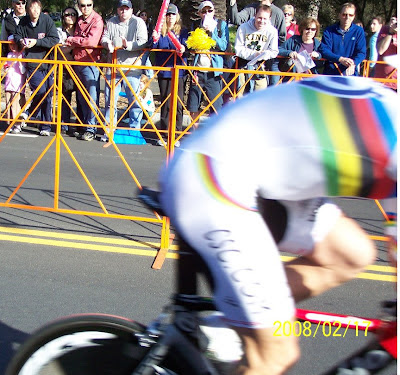 Fabian Cancellara was also too fast for my trigger finger. Dear daughter suggested I take photos of things that weren't moving! 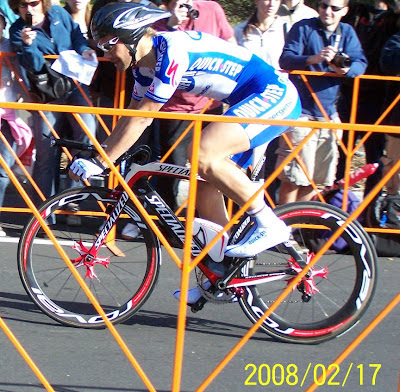 I missed Tom Boonen altogether, but got him on the cool-down section after the finish. Neither he nor Bettini have rainbow trim on their skinsuits - I DID NOT KNOW THAT ! 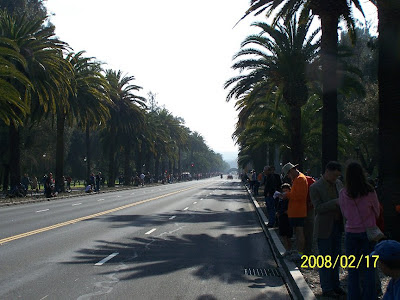 Palm Drive on the Stanford Campus.

Parking was no problem. We never did find the schwag distribution center though. Palo Alto ain't no San Francisco but they did manage to put on a good show.

And for the first time ever - some embedded video from my still camera... it's a brave new world, blog readers. This is Swedish National Time Trial Champion Gustav Larsson.
Posted by Diablo Scott 1 comment:

Started Out Cold and Foggy

But then it warmed up nicely. Somewhere in the distance, a coyote was howling. JB and Rick attacked and I didn't see them again until Junction.

Dudley Driveby: Coming down from the Summit while we were lounging around at the Junction. I noticed he was wearing hightop basketball shoes.

Southgate to Blackhawk to Crow Canyon and the trail to Peet's. You can still get a peppermint mocha even though it's not Christmas anymore.

Then I came home and made this cool bike parking rack out of PVC pipe: 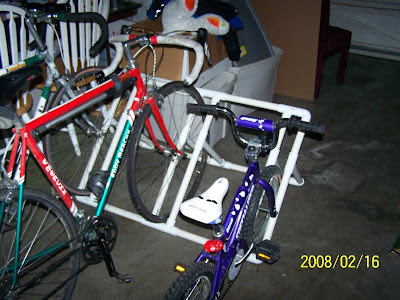 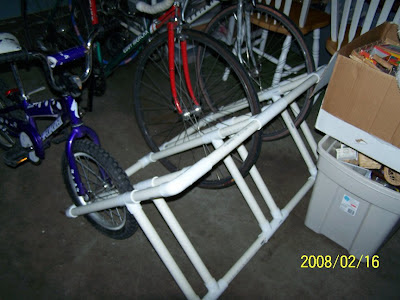 Also, please notice that I've added Maynard Hershon's blog to my "Highly Recommended" list of links. Maynard's columns in the back of Winning magazine were always the first thing I read when it came back in the 80's. I've got a hundred or so "The Bike Shop" stories that I saved when I tossed the rest of the issue; some day I'll scan them in. I met Maynard one time on a Cal cycling team training ride and he was an unassuming guy and I tried to act cool. Please click on his link and maybe he'll see that you came from my blog and maybe he'll come here and remember me. (Hi Maynard!)

Rick sent some photos too but they were embedded in an MS Word document and getting them out of Word and uploaded to Blogger is a confusing html-headache.

Today Scott was absent as he and Amy are celebrating her birthday – Happy Birthday Amy!
I arrived at the gate to find JB already there. I kept looking back down the road as I came from my car expecting him to be back there somewhere as he is usually the last to arrive. “You’re early” I said. “No, I’m on time!” was his reply. As we rolled out JB said his computer was still on the fritz, and he thought maybe the wire from the sensor was bad somewhere. I told him I had 7:38 on my clock since leaving my car.

The temperature was 48 at the gate and JB said it was also 48 at the summit. We talked about how nice a day it was and expected it to get much warmer. It really felt spring like.

Wildlife encounter: a lone coyote standing on the East Ridge just past the dips.

We went fairly leisurely until about Big Shady Oak when JB pushed the pace. We both crossed the line together at the Junction at about 49:20.

The temperature had risen to 58 by the junction so we shed layers before continuing up. The wind was picking up by about Juniper and we worried that it might really be strong at the top. This turned out not to be the case; there were a few gusts before Devil’s Elbow, but not bad.
JB was felling low on gas and commented that the only reason he was going all the way up was to see the view today. It turned out to be a good one indeed.

It Started Out Nice

Looked like the weather was going to hold out. Overcast but calm and not too cold - toe warmers were perfect.

Met up with Mark A on the way out, then with Rick and JB at the Gate. Rick and Mark rode away from me and JB pretty quickly and I joked that I had softened up Mark's legs with my four mile lead out.

All the little creeks are full of running water - it'll be a green spring on the Mountain.
On the Bump, JB tried an interval but his heart wasn't in it. Then he tried again a Chainbuster. I decided it made more sense to do intervals on the flatter bits so I could really pick up some speed. So JB would get 15 seconds lead on me with his efforts, and then I would catch backup up with mine.

At the Junction, Rick was waiting for us and had pulled out his camera phone for a finish line photo. I think JB figured I was through but I put in one last effort with good results - see sequence below. 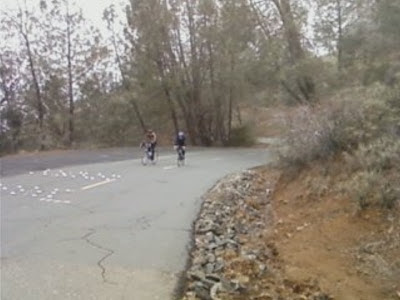 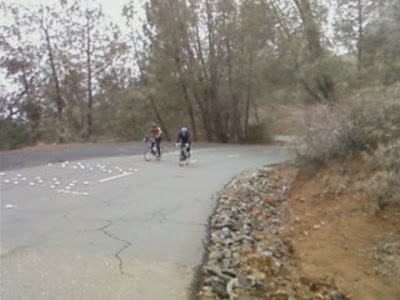 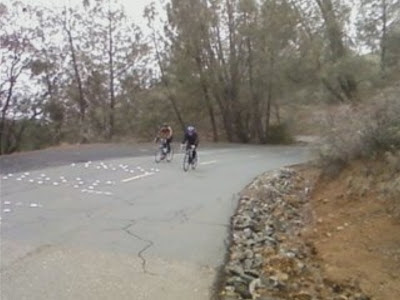 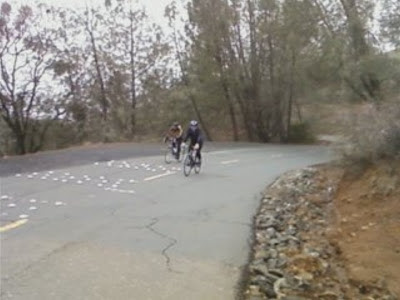 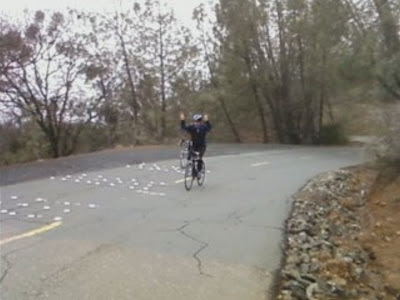 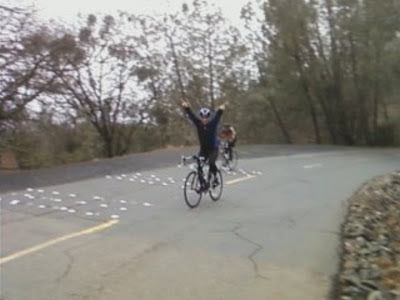 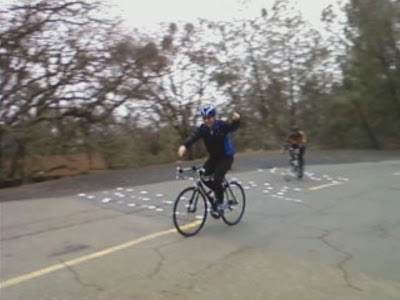 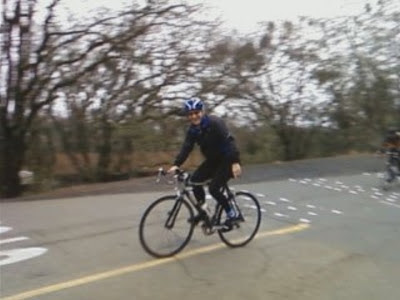 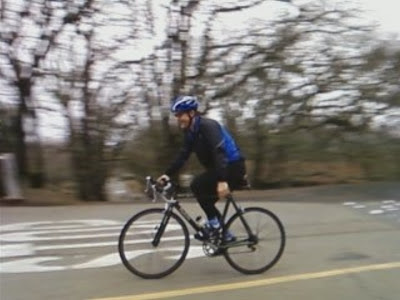 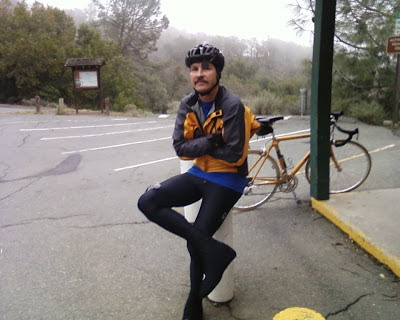 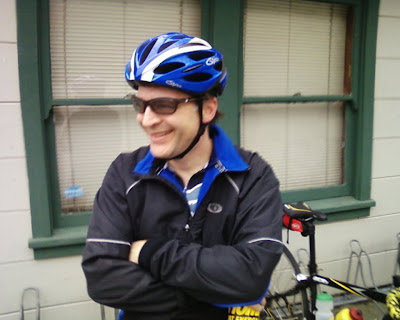 We heard a pack of coyotes all howling at once - that's unusual. Some other folks at the Junction started up Summit Road but came back down a couple minutes later saying the fog was so thick and cold it was almost solid. We thought maybe the coyotes had scared them away. Then it started to drizzle on us so we decided to go back down.
Posted by Diablo Scott No comments: