Seven Summit Saturdays in 8 weeks... only missed the fire day.


Wildlife Encounter:  turkeys at the Ranch, deer at Chainbuster 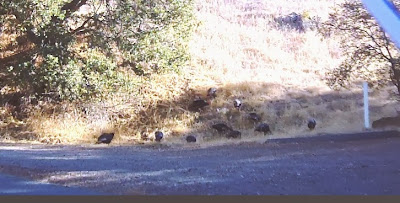 Enjoyable solo ride today.  The burn damage was more stark without all the fog.  There were crews working on cutting down the burned trees near power lines. 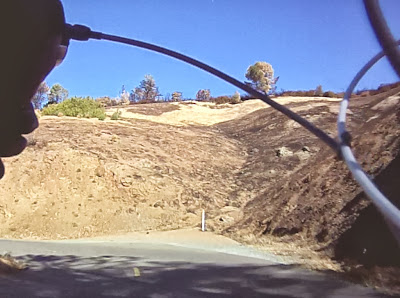 Rear tire went soft near the Grapevine Picnic area - I didn't find any sharp thingy so I was a little worried it was still in there and my repair wouldn't last either, but it held up fine.

So many people riding this morning that I quit trying to pass them all and just went with the flow.


Missed the Jump from Diablo Scott on Vimeo.

﻿﻿﻿﻿
Well we squeezed in one more after work ride, but that was definitely the last one for the year.
﻿﻿﻿
Product Review:  Mountain Rush e-Gel.  This stuff gets a 10 for concept and an 8 for execution.  It's a little more tart than the drink, but still tasty.  I'll be packing quite a few of these on the Devil Mountain Century in a couple weeks.  I have the best luck preventing cramps when I take these e-Gels along with e-Caps from Hammer (and salty stuff and bananas and Cytomax) for a combination of electrolytes.

Me, Seppi, Tall Charlie, Rhys, and Evan tonight.  And it was Rhys's first time up this year; too busy with work and two kids going to college I guess.

Rhys and Charlie set a fast pace for the first three miles while we other three held back a bit.  After the Ranches it all blew up.  Evan took a commanding lead and then me a minute behind, and then about a minute's gap between everybody else.

On the way back down, Rhys flatted his rear tire and we all stopped to wait for him.  We did give him a ration for having one of those useless ultra-mini pumps.  Then we noticed his spokes were almost all too loose so I did a little roadside tensioning.  Then once he got going again, now pretty dark, while leading the five of us down, he ran over a bunny and killed it.  I was last in the train at that point and I heard some shouting but I figured they were just pointing out the road kill in the shadows - wasn't until later that they told me Rhys was responsible.  He said the thing changed direction after he'd committed to going around the other way and thump-thump, dead rabbit.  Rhys has a pretty stout touring bike with substantial tires so no damage to bike or rider.

The fire's been out for a week.  Let's see the damage up close. 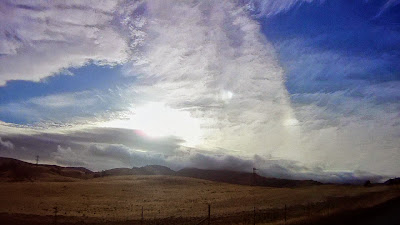 Forecast for sprinkles - I decided to ride my winter bike and bring a windbreaker (WAY underestimated how wet it was going to get).  It was sunny and clear over my neighborhood but there was a dark cloud over the Mountain.

I already knew from Wednesday Night's Ride that there wasn't anything to see on North Gate Road.  I was planning the video I would make for today's ride and I imagined a theme of loss and recovery - maybe with some slow motion edits for impact... then I realized I could just ride slowly and get the same effect!

Tarantula Tally:  one crawler and one cadaver. 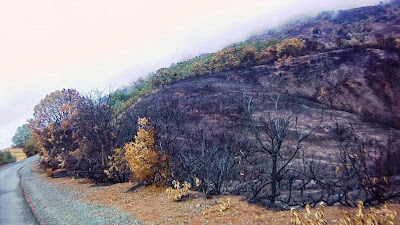 A mile or so above the Junction... a little before The Pines picnic area, is where you first see major damage - acres of brush on the south side of the road just charred.  Then there were smaller charred areas all the way up to Juniper with some really large plots of charred land near the water tank, the pipe, and Devil's Elbow.

Muir picnic area is one of my favorite spots for a Diablo Spy Cam - there was a picnic table hidden from the road by some tall bushes and an outhouse - table, bushes, and outhouse are now just piles of ash.

Another thing I thought about was how different the Diablo Challenge will be this year.  You really get a different feeling riding past charcoal than buckeye trees and mesquite.  It was extra eerie because of the fog and drizzle; such an extreme change from a week ago.

From the Summit you could see how close the fire got to the structures and the antenna towers.  I got a nice perspective on the area shown in the photo I posted last week with the plane dropping fire retardant. 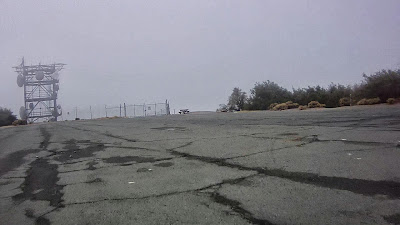 I was a little concerned that there would be a lot of vehicle traffic today - folks wanting to check out the fire damage for themselves... and there was a little more than usual, but I think the threat of rain kept most of them away.  Probably double or triple the amount of cyclists up there for a September Saturday though.  I think we were all happy to be back on the Mountain... yay firefighters; this could've been a lot worse.

The rain got pretty thick before I was back down - had to stop several times to wipe my eyes just so I could see.

I'm the only one from work who could make it today.  JB was hoping to come, but he's packing for his European Vacation and didn't know if he'd be done... I guess not.  Charlie and Kevin out of town on business, Seppi on his honeymoon in Jamaica, Tanner doing some kind of training ride with her AIDS charity folks, Ed... not.

We're hoping to do one more Wednesday Night Ride next week; maybe leave a little early.  Sunset tonight is 7:10 and next Wednesday it's 6:59 so the writing is on the wall.


My plan was to ride up to Livermore Valley Overlook (LVO) to see if I could see any fire damage. Plan went well, but didn't see any burned stuff at all.

Wildlife Encounter:  turkeys above the Bump. 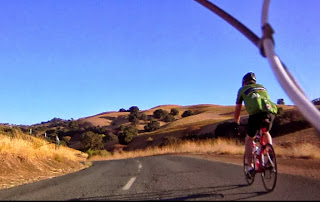 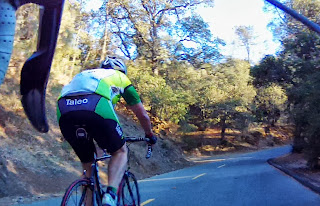 The Mountain is expected to open up again for visitors on Monday. Good day to do the health club team ride.

Pretty foggy in some parts, nice change of pace, Pinehurst is always fun. 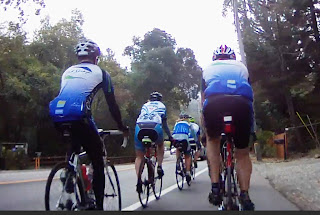 Wildlife Encounter: Deer. He was between the road we were riding on, and Hwy 24 - between two fences like a cage.


Pinehurst with Team Club Sport from Diablo Scott on Vimeo. 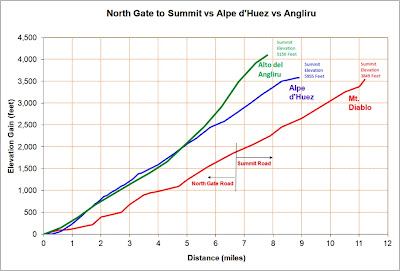 Park is closed due to the fire.  This is a terrible feeling.

This is from my office on Monday:

Five Summit Saturdays in a row.  I might extend the string through October 5th... the weekend after that is the Devil Mountain Century by Veteran's Victory Velo.

Roadkill Report:  tree squirrel - well, still kind of flopping around but he'll be deceased by the time you read this.

Spare the air day - smoggy and hot.  Lots of riders were coming down after an early ascent to beat the weather.  Lots of hikers on The Mountain today as well... just a coincidence it seems.

Before the century I'm going to need to put on those new tires in the garage, and the new brake pads I bought... might as well change the bar tape while I'm at it too... oh heck, maybe a complete overhaul and carnauba wax.

Today's gruppetto: Me, Charlie, and Evan.

Lots of riders on The Mountain.

At one point we heard what I thought was a giant tree branch cracking off and falling behind us, but it turned out it was a guy who had accidentally ridden onto the gravel shoulder and then unclipped - I know that doesn't sound like it would sound like a tree branch falling, but it did.

Why do some people prop their bikes upside down when they do a flat fix? I just don't get it. 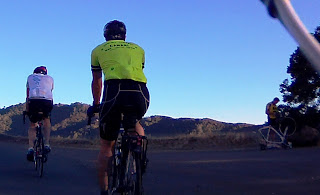 Wildlife Encounter: Turkeys and an owl (!)

Sun was setting as we finished the descent - but we got kind of a late start so there's probably another two weeks of Wednesday Night Rides if we start up on time. 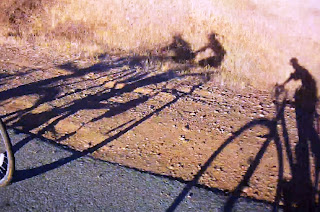