Friedreich's Ataxia is a degenerative nerve disease - my friend Kyle has it.  Kyle is now the coordinator for the Ride Ataxia series of charity events around the country.  I think they raised over $100k for research on the NorCal event.  Kyle used to work for my company so lots of us do this ride every year to honor him.  Check out this trailer for the upcoming documentary and you'll see why.

The Ataxian EPK from Redwood Creek Entertainment on Vimeo.


Kevin had the idea of riding with his son in the trailer... son has a chromosome disorder and he's just about too big for the trailer so Kevin thought this might be the last chance to do a special ride with him.  Charlie and I decided we'd ride with him, and to equalize things a bit Charlie would ride his single-speed classic old touring bike, and I'd ride my fixed gear urban hipster bike... it was a fun time.

Product Review:  DIABLO flavored hot sauce from Taco Bell.  Of course I had to try it... it's kind of a black pepper hotness instead of a hot pepper hotness... I like FIRE sauce and VERDE better, but this is cool. 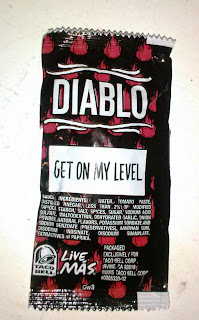 Meeting at work ran late so I got a really late start - and since I was giving Elmar a ride, he was late too.

Last week I went sort of easy until two miles to go and then went hard.  Elmar finished about two minutes ahead of me.

This week I went hard for the first two miles and opened up a big gap on Elmar but he caught and passed me on The Bump.  I did hear him breathing pretty hard though so he was hurting. 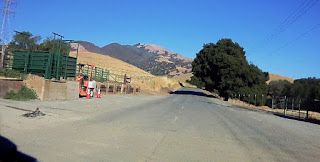 Then I kept him within about a minute up until Chainbuster and then I started to get closer.  I thought if he was within site at the "GATE AHEAD" sign, I'd unleash my sprint with great vengeance and furious anger... and he hadn't seen me so yet so he thought he had a bigger gap than he did.  But then a car passed us and he looked back and saw me and upped his cruising speed and when I got within striking distance I didn't have much kick left.  Anyway, it's been fun having him along because he's just a smidge faster than me and that makes me want to get better. 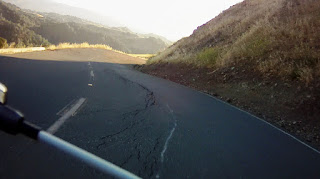 A couple friends are doing the AIDS ride starting this weekend so they didn't come today... I've known several people who did this and they all said it was a wonderful experience.  There's a high bar on sponsorship for that ride - I suggest finding someone who's doing it and sending them a few tax-deductible bucks. 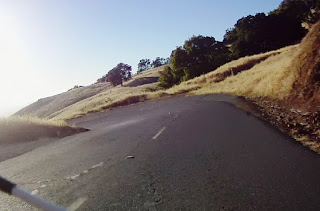 Saturday's the Ataxia Ride... some of the same roads as Foxy's, but not Wooden Valley Road in Napa County that cracked my ribs seven months ago.  I should be fine.  Riding the fixed gear! 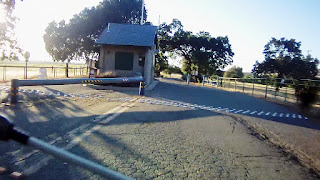 Vimeo's been cracking down on users like me who like to include commercial music soudtracks... so even though I own the music file and don't make any money from it I get denied - enjoy this video with generic music.

Ode to Fog from Diablo Scott on Vimeo.

Next week:  Ride Ataxia !  Sponser Me
Posted by Diablo Scott No comments:

I told Kevin a good training ride would be to go easy for the first 4-1/2 miles and then hit it hard for the last 2 miles.  He said OK, but his effort level 11 is not noticeably different from his 6.

So I'm discussing how to psyche yourself up for a hard effort like that, and preparing to enter the pain cave and right at 2mtg, Punkin Jay passes us.  Now his cruising speed is about the same as my 15-minute max effort speed so it was perfect timing until I faded out after Chainbuster.  Kevin only had about 10 minutes of max effort in him so he ran out of gas a little earlier.

Wildlife Encounter:  Heard an owl at Junction but didn't see him.  Saw a deer on one of the switchbacks on the way down but he stayed off the road.  And a couple turkeys playing chicken.

JB's back from vacation.. but with a sore throat; he bailed at Junction.

Today I introduced myself to Sandal Guy... his name is Kasters and he rides on Saturdays and hikes on Sundays.

Windy down low, foggy in the middle, sunny at the top... that's Diablo for you. 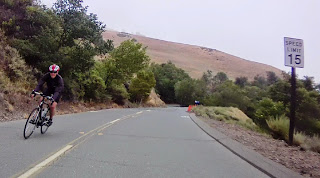 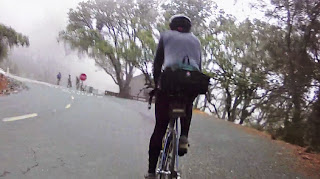 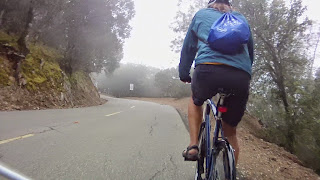 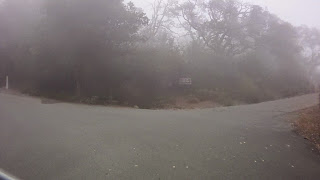 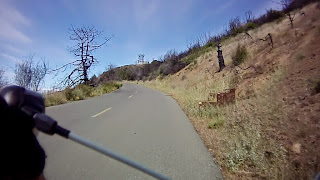 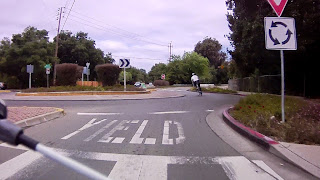 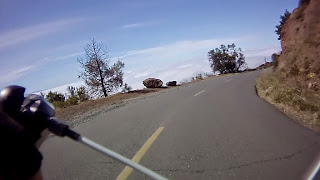 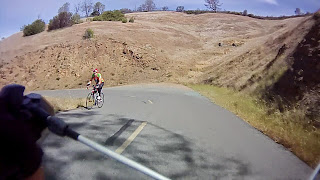 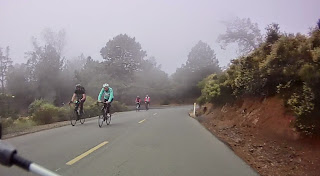 Check out this view of the fog layer from the observation deck:

New guy Elmar in blue brings game to the Wednesday Night Ride.  He grew up in Switzerland and remembers all the big racing names from the 70's and 80's with a special fondness for Hinault.  Said he's just getting back into riding after a long time off the bike  He attacked from Moss Landing and kept a gap all the way to Junction.  Might show up on a Saturday ride too. 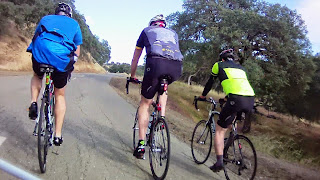 I've seen a stage of every Tour... can't let this one go by without me.

Took a half day off from work and went to Livermore to watch the peloton go up Mines Road... not as exciting as a Diablo stage but still pretty fun. 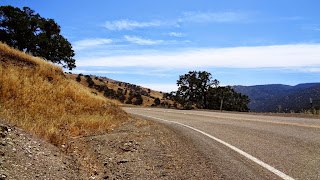 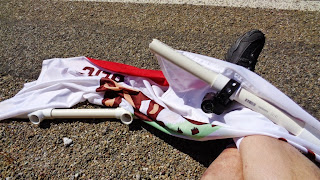 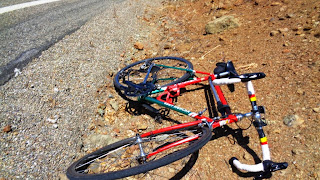 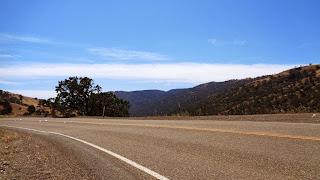 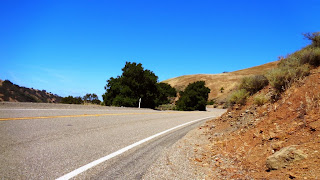 JB's on vacation so I snubbed The Mountain and hooked up with the health club team.

JB at the Gate and admitted he didn't have a good reason for not coming last week. 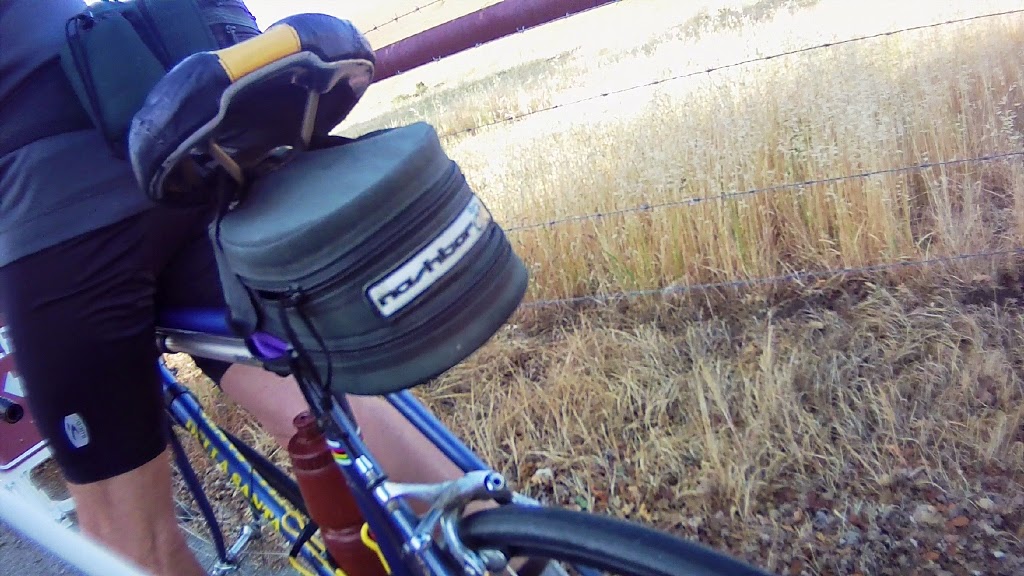 Today's special guest rider:  RICK.  He has an important race tomorrow so decided riding with me and JB would be the perfect warm-up.  We did some catching up and some gossiping. 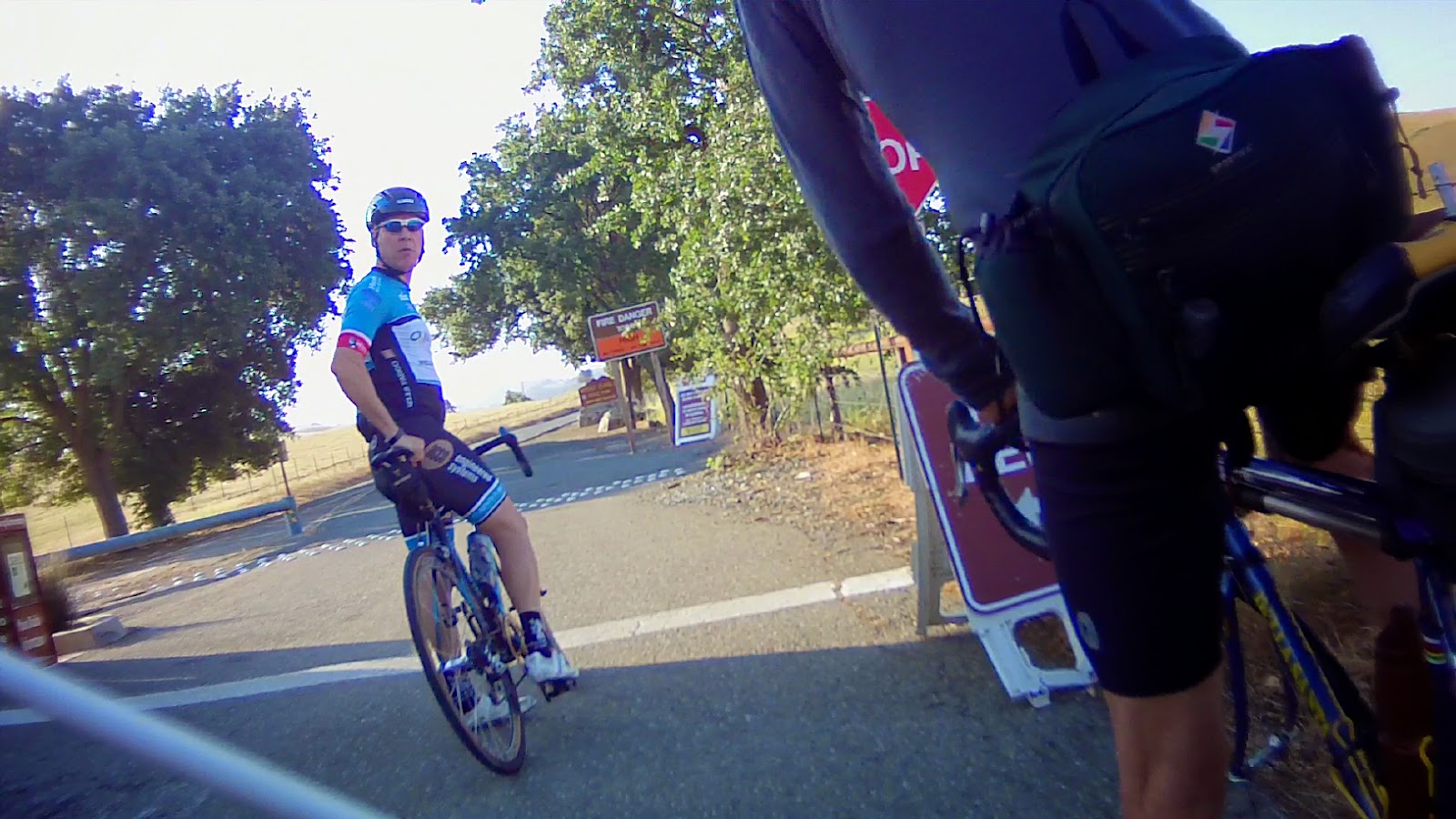 Several big rides this weekend, I was surprised to see so many riders on The Mountain today.

Wildlife Encounter:  Deer at the vineyard. 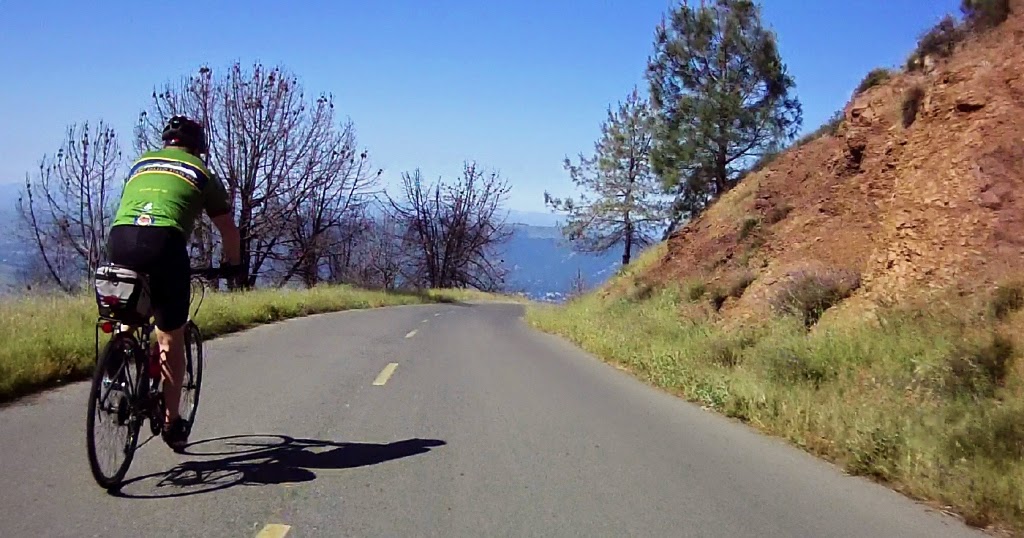 Flatted at the Rick Roll.  Some little sharp stone that was kind of hard to remove.  Rear started going soft and I felt it going around this turn and then I did that little bouncing on the saddle thing to be sure and yup.  Is that three?  Yeah, I think I'm done getting flats for a while.


Oddball Observation:  Lady with her helmet on backwards.

Bonus blog photos:  Got my tomatoes planted!  JB sprouted these from seeds and got too many so these are the extras. 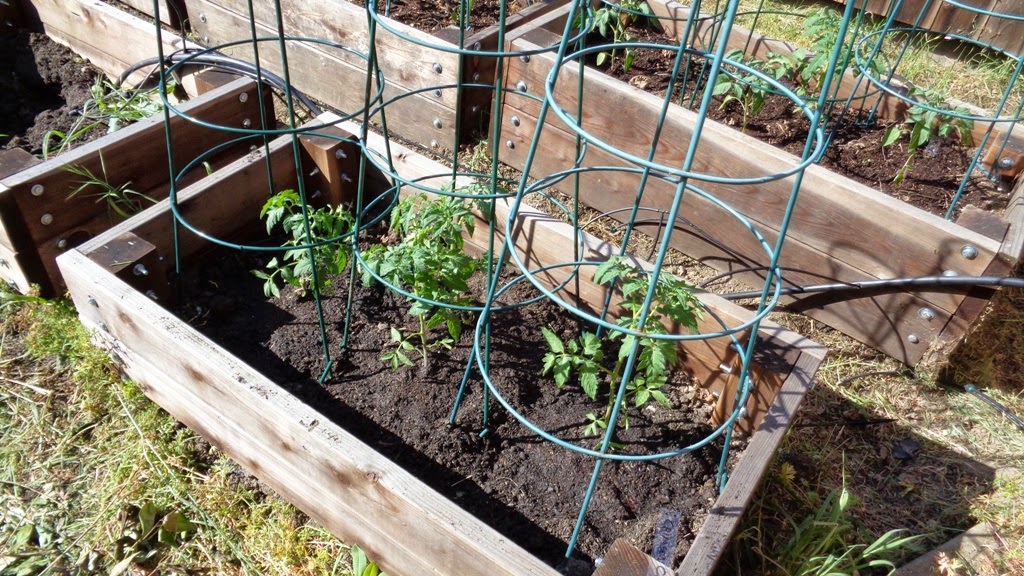 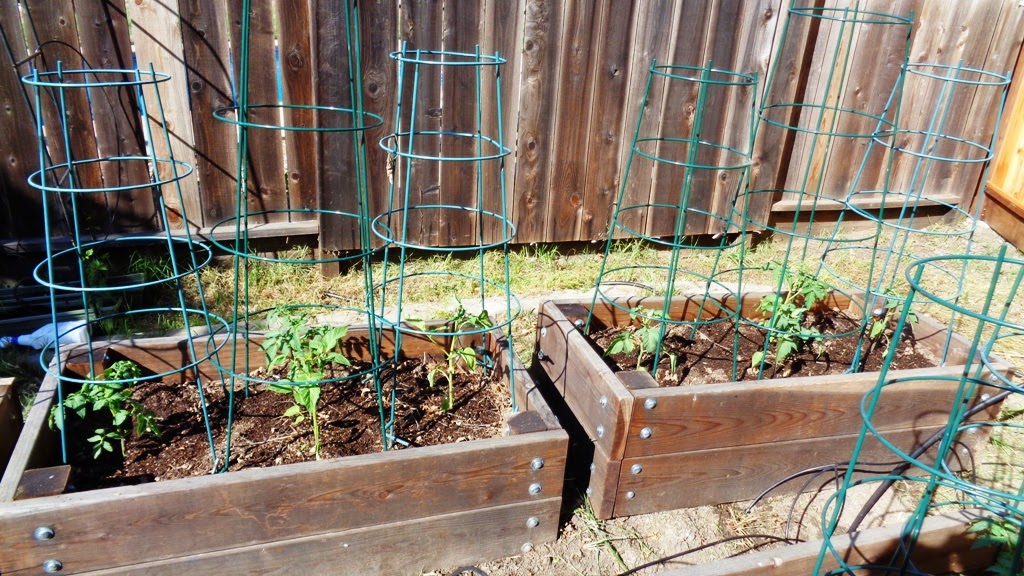 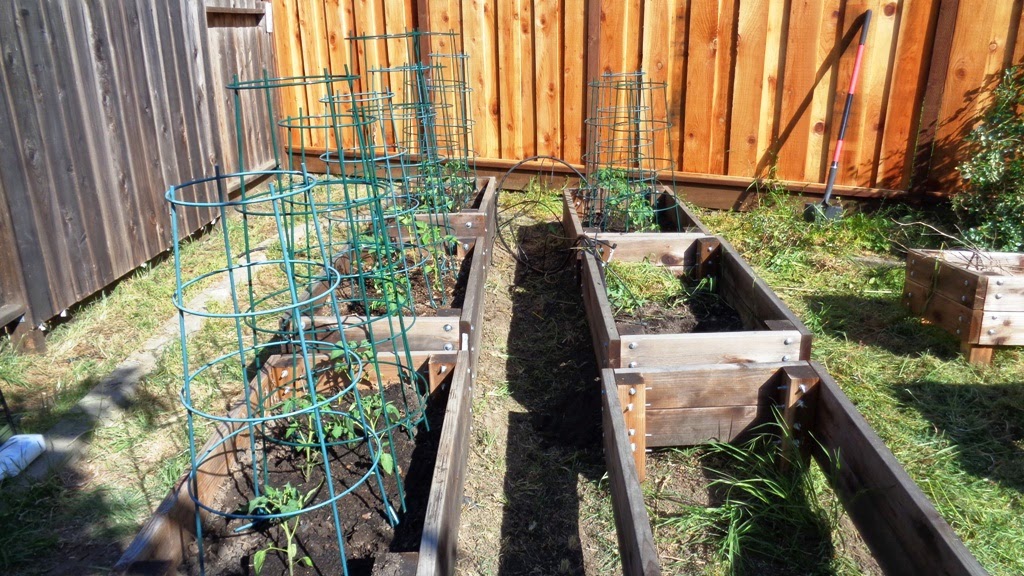 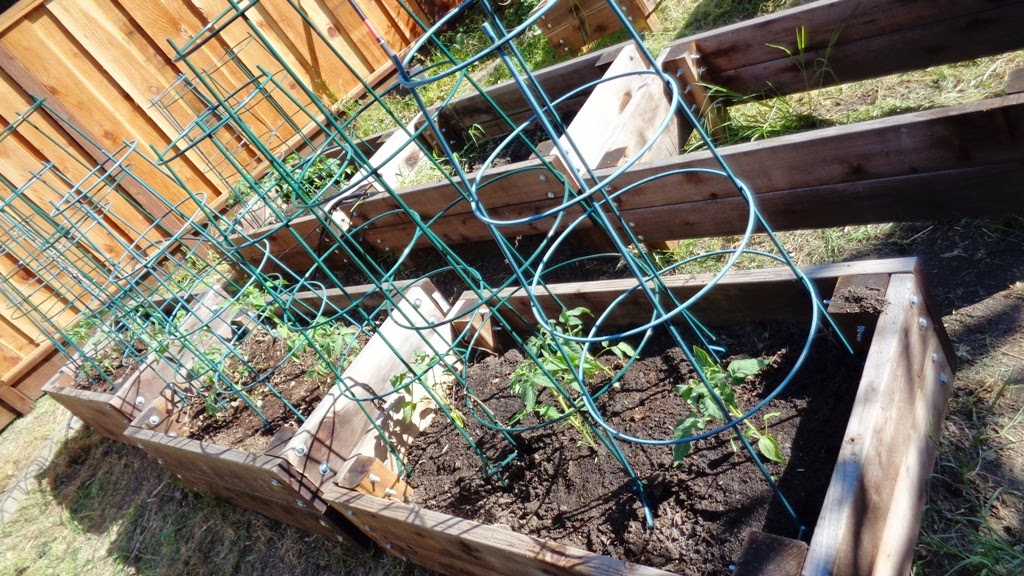