Me, Jeff, JB, Brad and Adam. We all split up pretty early though and rode solo. Just a little cool and breezy and I'm not really in a hurry for the oppressive heat. 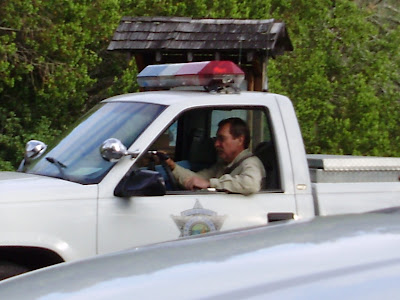 At the Junction we talked to the new park manager (I forgot his name) - he oversees MDSP and a few other state parks. He's a bike rider and we related well to him and he asked us all to write the Governator and state lawmakers to keep the park open despite the budget crisis. He said it would cost more to shut the park down than to keep it open and the park makes a net profit anyway but he's sure they'll close it if we don't organize a campaign. He said if the park did close they'd barricade all the roads and post NO TRESSPASSING signs on all the access routes including dirt trails and there'd be some hefty fine if we tried to ride it under those condtions. He was a troubled man.
Posted by Diablo Scott

I really can't get my brain around closing this park. You know how popular it is with cyclists, and on the weekend the place is crawling with hikers, birders, photographers, and crazed motorcylists. I personally think Arnold is semi-brain dead. During his campaign he liked to brag "I have plenty of money" and so is pretty insulated from the trials and tribulations of us regular people. Just a guy in a leather jacket at a photo op most of the time. It will be bad karma if this park closes!