Parked on Doncaster and both tires were flat!

Pumped up the rear and it seemed to hold, but the front had an audible leak from the valve area so I replaced the tube and got a late start.

On the way up I got passed by no one… seems not to be related to my actual speed though since most everybody on the Mountain was on their way back down already.

And so the sun has set on another season of Wednesday Night Rides – about 6:30 but it was pretty dark by the time I got back to my truck.


The Tour of California just announced the Stage Cities for 2011, and Santa Rosa has been SNUBBED!

There will be a mountain top finish (yay!), but not Diablo (boo!). I am not familiar with Mount Baldy northeast of Los Angeles so I prepared this chart: 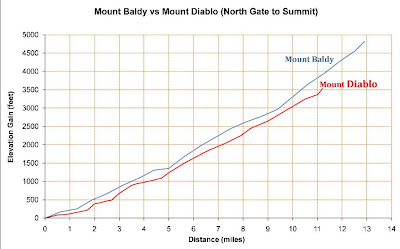 That is a climb worth an HC rating!

Tough Ascent has an article for you on Baldy.

Thanks. Nice report there.