I always think I can make it from my house to the Gate in 20 minutes; but heaps of data don't support that conclusion... I was five minutes late and JB had just started up but I caught him.

Wildlife Encounter:  About 50 turkeys near Little Pine Creek.  I made my signature gobble noise and got them to all gobble back... that always cracks me up.

Kind of a quiet day on the Mountain, but we did see a few guys descending - they must have started up well before dawn.

There were several places where someone had taped off areas like this: 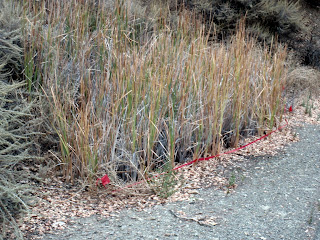 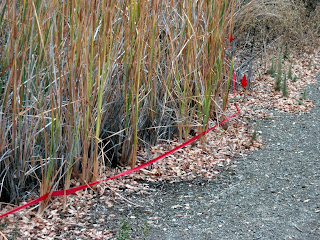 Is that some species of protected cat tail?
I didn't have an encounter, but there were a bunch of coyotes howling and yapping up near the Upper Ranch.

JB went down SGR and I went home, but back at Little Pine Creek there was a big nature hike going on and some of the turkeys had wandered up to the road: 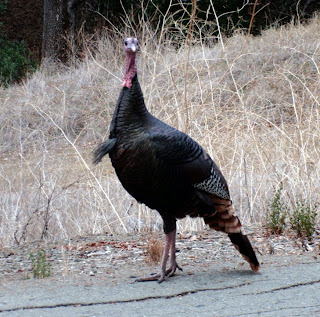 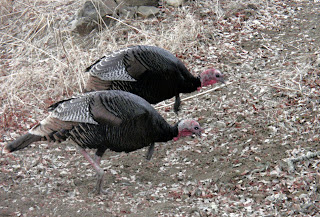 I stopped to watch them for a while and marveled at how much like dinosaurs they were.  They didn't seem to mind my being there either.

There was another guy stopped on the other side of the turkeys, coming up.  I said something as I went by and he asked "Hey, are you Scott?", so I turned around and talked to him for a while.  His name is Mike and he started riding Diablo in the '70s, and had some good stories. Even sent me this photo of Eric Heiden riding a race(!) on Diablo - anyone recognize that fence gate? Is it still there? I love the shot - Heiden on a Rossin and that Ten Speed Drive guy on a Guerciotti.

Clicking on the photo should take you to his flickr site for the original.

Front flat when I got home - looks like a bit of Michelin wire found its way into my Vittoria Evo - easy patch.
Posted by Diablo Scott

Scott - it was wonderful meeting you! If it wasn't for the turkeys and my recognizing the bike from the blog it we might never have happened!
;)

That fence gate in the Heiden picture was there when a very large section of the mountain was active cattle ranch. Today that gate is gone but the trail is still there. It's at Chain Buster.

Aha! Chainbuster it is - that gate is where the "no dogs" sign is now. OK, next time up I'm getting a photo with that exact perspective for comparison. Likeley won't find a classic VW Bug for a prop though.