Got a late start tonight.

There was another news van just past the Loading Dock. This one was un-marked though so I didn't know what channel to watch... probably another state budget story. 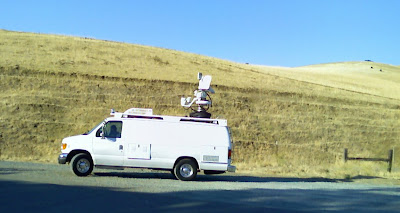 Wildlife Encounter: a big buck deer standing on the side of the road below Clavicle Cracker. There was a rider in front of me that rode so close to him I didn't think she saw. I stopped for a photo but then he ran away up a hill and into the sun before I could take it. Later caught up with the rider and she said she did see the deer and passed plenty wide. We wondered if he had a posse of females around too.

Warm and windy tonight - pretty stiff headwind in some sections. Lots of people at Junction but I turned right back around since it was late.