I've lost track of how many times I've volunteered for this great event... but it pretty much matches up with how long I've owned my pickup truck.  I think I only missed a year or two since 2007.

After the race, I gave a ride down to a unicyclist from SoCal, and it turned out he was the guy who set a new record for the unicycle category.  Ben Soja; thank you for bringing GLORY to The Mountain.  Ben told me he is also the only unicyclist to complete the Everest Challenge.

One guy somehow lost his backpack, and it certainly wasn't his fault and I felt terrible for him, but I had no idea what could've happened to it.

Also on the way down, I came across a guy who had blown up his tire and needed a ride - I transported his bike but didn't have room for him, and another volunteer gave him a seat.  That's how volunteering works.

The weather was GREAT - no wind so the times were FAST and the gaps between groups were big. I almost didn't make it into position before the winner came by; I didn't get my video started until after the first three guys went past.  Kirk Carlsen WINS with a time of 44m50s, local legend Nate English was fourth, and Kevin Metcalf came in 16th... you know that was some fast racing!

As usual, I brought my COWBELL, and a whistle and did my super-fan thing at the bottom of The Wall.  Some folks seemed to appreciate it. 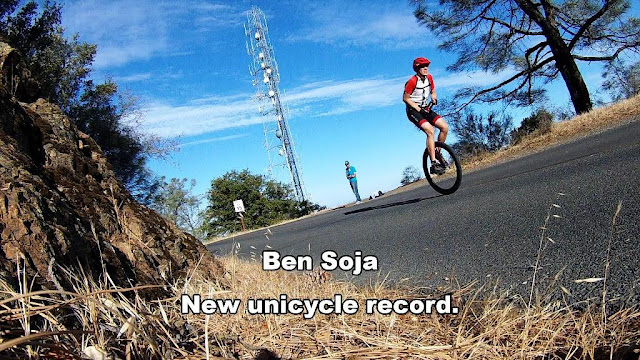 Video below; edited for brevity.  If you finished under 90 minutes I've probably got you in the unedited version - drop me an e-mail and I'll be happy to send you a clip - tell me your finish place and time and what you look like.   It is my privilege to support this event.